As our 21st century society evolves, computer science (CS) proves fundamental (Cotteleer & Sniderman, 2018) to our global communities’ economic growth, national security, sustainability and sector-wide innovation. However, with only 20 per cent of female GCSE and National 5 students taking CS in 2017 (Royal Society, 2017), the need to attract and skill-up more girls in the subject approaches crisis-point here in the UK.

Globally, with female representation within the profession at one in four, concerns around the equity of CS skills division mount, as this critical industry of wide-reaching influence across all cultures, races and creeds continues to remain male-dominated.

‘There is a gender divide, with women and girls enjoying less access to information technology than men and boys. This can be true of rich and poor countries alike.’
(UN, 2005)

Recommendations from world leaders, scholars and industry experts call for urgent action to identify how to inspire more females to participate in CS studies, in order to address what is clearly a growing global problem. In the UK the Royal Society’s (2017) recent report highlights the need for teacher-led research into providing equal opportunities for girls to participate in CS activities.

Many studies have already revealed the barriers causing this issue. The teacher-led research that I conducted as part of my MSc dissertation investigated and revealed how converting barriers causing that lack of participation – including gender stereotypes, accessibility and uninspiring curriculum content – into drivers can inspire more girls to take up CS at GCSE, which can potentially lead into CS careers.

One such focus was on an apparent lack of concern for the gender imbalance in IT participation. Such unconscious teacher bias, according to findings from Google (Dee & Gershenson, 2017), reinforced these stereotypes in schools by way of subtle aspects of classroom environments – such as the gender ratio of students in a class, or posters associated with masculine CS stereotypes – which can trigger anxiety that affects the performance and academic engagement of females (a phenomenon known as ‘stereotype threat’). However, a long-term Australian PhD study (Fisher, Lang, Craig, Forgasz, & McLeod, 2016), successfully identified an approach to changing girls’ perceptions around CS, which even resulted with female students pursuing CS careers after participating in the Digital Divas project.

Based on my literature review, I applied a hypothesis around ‘feminine constructivism’ (Papert & Harel, 1991) to my research plan, designing collaborative active learning activities that incorporated a STEAM (science, technology, engineering, art and maths) digital making project approach. As both teacher and researcher I established two ethnographic case studies to observe female students in years 3 and 6 in their CS lessons working through these activities, in which the focus was solving a real-world problem using physical computing and makerspace resources.

‘Linking creating to having fun, ensuring that activities have real-world relevance that appeals to “female empathy”, and collaborative working with physical computing proved effective drivers that could inspire more girls to take up computing studies.’

The eight-week observations and surveys revealed behaviours and approaches which enabled the girls to engage and connect to practical uses of CS in the world around them. In classifying these as ‘drivers’ which could inspire more girls to study CS, my analysis indicated a theme in which ‘creating’ linked to ‘having fun’ proved strong drivers to build into lessons. A key observation was that the desire for activities to have a ‘real-world relevance’ appealing to ‘female empathy’, proved a further driver. Similarly, ‘collaborative working’ with ‘physical computing’ was effective at engaging and developing students’ ideas using ‘tangible’ and ‘dynamic CS resources’, such as the ‘micro-bit’, which is affordable, easy and quick to set-up and responsive to many situations and abilities.

Tapping into feminine constructivism to address real-world problems with accessible CS resources created the perfect learning environment for promoting key inspirational drivers for girls to study CS, and one which could be adapted to shape and enhance our CS syllabus in order to develop not only skills but career aspiration. Based on this research, my grounded theory to move forward establishes three core principles: ‘OPP’ – overhauling, providing and promoting. These require a joined-up approach from Enablers to support and deliver the concepts that will underpin female participation in CS.

The table below proposes a set of interventions to address equity and access built around the three approaches encompassed by OPP which, if delivered by enabler stakeholders, can establish an environment that nurtures the drivers identified which tap into ‘feminine constructivism’, inspiring more females to study and pursue computer science.

Figure 1:Interventions to address female underrepresentation in computer science at GCSE proposed under the OPP model 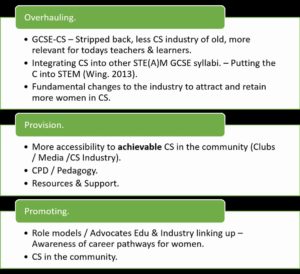 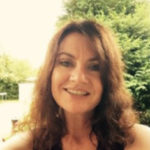 Teacher of Computing at Wellingborough School

Martine Mannion is a lecturer, researcher and trainer. Having worked successfully in the IT industry since leaving school, she moved into education 15 years ago, teaching computing at the early years, primary and secondary levels while also supporting teachers in the application of innovative pedagogical practices such as TPACK and 21CLD frameworks to effectively deliver technology-enhanced learning. Martine recently became a lecturer of computing in further and higher education. Martine an MSc with distinction in computing in education at Nottingham Trent University in 2018, and was awarded the School of Education’s dissertation award for her research into identifying drivers to inspire girls to study computer science. As an early career researcher, Martine will continue her educational research at PhD. level around the development of ‘feminine constructivism aided by the use of physical computing in the classroom’, while continuing to advocate drivers to inspire female...