Since the inception of international comparative tests in the 1960s, Japanese students, like most students around east Asia, have consistently outscored their Anglo-American peers (that is, the United Kingdom, the United States and Australia). The shift from TIMSS to PISA two decades ago – much touted by PISA advocates as the shift from regurgitation of curricular contents to ‘creative’ knowledge application in contemporary society – only revealed the continuing dominance of east Asian students. The PISA results were actually a surprise to many researchers, given stock images of east Asia as land of rote memorisation and regimes of ‘cramming’ test prep. Here it is worth recalling Ronald Dore’s characterisation of Japanese education – one of the earliest – dating from the mid-1970s:

Indeed, this image of an ‘exam hell’ has consistently performed a double function in the Anglo-American educational discourse: assuring us that Japan performs, but only at a hefty psychological and social price, and that therefore there is very little we can learn from east Asian approaches.

However, our recent study shows that this stereotypical image of Japanese education, and by extension all of education in east Asia, is outdated (Komatsu and Rappleye 2018 forthcoming). Utilising data from PISA 2015, we made the following findings.

Yet despite both these findings, achievement remains world class. Another interesting finding is that Japanese secondary students now spend less time in out-of-school learning than Anglo-American students. Our complementary study (Rappleye and Komatsu 2018) works in tandem with these new finding by showing how school-related anxiety and stress for Japanese secondary students are now comparable to those for Anglo-American students. All of this points to the fact that the well-worn ‘exam hell’ stereotype no longer matches the realities of Japanese education, and renders problematic the older view still uncritically recycled in educational research and popular discussions alike (see for example Marginson, 2011; Castle, 2016).

‘Our images of the obedient and diligent, but secretly stressed and uncreative, east Asian student has prevented us from thinking deeply about the alternatives that east Asia presents.’

Our images of the obedient and diligent, but secretly stressed and uncreative, east Asian student has prevented us from thinking deeply about the alternatives that east Asia presents. In fact, there is a consistent body of literature that has long attempted to challenge the dominant Anglo-American stereotypes (for instance, Francis and Archer 2005; Park 2013; Komatsu and Rappleye 2017; Rappleye and Komatsu 2017). Yet these have not made much headway in the Anglo-American debates, given the continued dominance of the ‘exam hell’ narrative.

Ultimately, we hope that east Asian education and thought can be taken seriously – that is, recognised as an onto-epistemic resource for deeper self-reflection (Takayama 2018), rather than relegated to exotica or empirical raw material within parochial Anglo-American debates.

Francis B and Archer L (2005) ‘British-Chinese pupils’ and parents’ constructions of the value of education’, British Educational Research Journal 31(1): 89–108

Komatsu H and Rappleye J (2017) ‘A PISA paradox? An alternative theory of learning as a possible solution for variations in PISA scores’, Comparative Education Review 61(2): 269–297

Komatsu H and Rappleye J (2018 forthcoming) ‘Is Exam Hell the Cause of High Academic Achievement in East Asia? The Case of Japan and the Case for Transcending Stereotypes’, British Education Research Journal

Rappleye J and Komatsu H (2017) ‘How to make Lesson Study work in America and worldwide: A Japanese perspective on the onto-cultural basis of (teacher) education’, Research in Comparative and International Education 12(4): 398–430 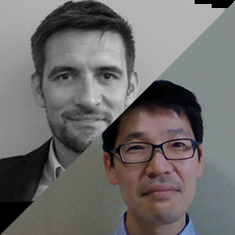 Jeremy Rappleye is an associate professor at the Kyoto University Graduate School of Education. He has lived in east Asia for more than 15 years, and completed his doctorate at Oxford University, but he grew up in northern California.

Hikaru Komatsu is a research associate at Kyoto University and a member of the prestigious Hakubi Project. He graduated from Tokyo University. His research interest lies in scientific and philosophical perspectives on human–nature interactions. He became deeply interested in education and learning the moment his daughter – Asato Komatsu – entered his world.