Coming from a background in community learning and development, my work in partnership with Banff Academy as part of my PhD research has been an interesting and rewarding experience. I find myself back in academia after a break of around 20 years, and it’s been longer still since I spent much time inside a school classroom.

When we were successful in obtaining the BERA BCF Curriculum Investigation Grant, I saw an opportunity to use some of the funding to involve creative partners in our work so that we could produce artistic outputs as part of the research process. I was also very keen that the school-university partnership involve pupils as well as teachers in project design, and incorporate their opinions and voices at every step of the process. The vision was an equal partnership, co-creating knowledge and learning together.

Using ethnographic methodologies to gather our research data, I initially thought that I would join the class and do participant observation – sit in with the pupils and improve my rusty Scots as I familiarised myself with the classroom environment. I was naïve in my assumption that the pupils would talk to me and accept me as an equal member of the group, and it took some time to build relationships before we produced any meaningful work.

We developed an idea for a Scots Language Week, involving visits from an author and a journalist, and a two-day creative arts workshop where we worked collaboratively with an artist, Martin Ayres from Caged Beastie, to create a portrait exhibition called ‘Fair Trickit! An exploration of our local language and what it means to us’. For me, the Scots Language Week was the pivotal moment of our research project, because working in a different, less formal way put the pupils in the driving seat as they showed me around, introduced me to Scots speakers in different parts of the school, and developed skills in research methods including questionnaire design, interview techniques and using socially engaged art practices to explore key issues around language, identity and sense of community.

The Scots Language Week also generated significant media attention, which raised the profile of our BERA project within the school, and created a real buzz. One of the aims of our work is to raise awareness of Scots as a language that can be taught and learned in school, just like any other language, which ties in with Education Scotland’s ‘1+2’ language strategy. When our project was in the news, we were contacted by the Scottish Qualifications Authority and Scottish Language Dictionaries, who have subsequently supported our work and created opportunities to share good practice. For example, our exhibition was displayed during the 2019 Glasgow Science Festival.

“This generation has the luck that education is supporting Scots, and they are allowed to use it. It’s the first generation where there’s less prejudice than ever, probably, and that’s going back 300 years.”

Lexicographer and academic A. J. Aitken (1985, p. xv) said, ‘Officially Scots does not exist. It is not the subject of any official policy, and no one dreams of teaching it to foreigners’. However, since the UK ratified the European Charter for Regional and Minority Languages (Council of Europe, 1992) in 2001 there have been rapid policy changes, which led to the creation of the Scots Language Award qualification in 2014. When I interviewed Scots language teacher Dr Jamie Fairbairn (2018) for my research, he said, ‘This generation has the luck that education is supporting Scots, and they are allowed to use it. It’s the first generation where there’s less prejudice than ever, probably, and that’s going back 300 years.’ One challenge of working with the Scots language is that some people still perceive it as slang, or suitable for use at home or with family but not for using in school or at work.

Teaching Scots in school is a lever with which to change attitudes towards the Scots language in the wider community, and Jamie’s enthusiastic commitment to Scots spills out of the classroom – Scots-language posters, creative writing, and the policy document Aiberdeenshire Bairns’ an Young Fowk’s Chairter (2018) decorate the corridors, and our exhibition is on display in the boardroom. Partnership working has proved a fruitful way to make meaning out of individuals’ stories and experiences with Scots.

A companion piece to this blog by Claire’s collaborator on this project, Jamie Fairbairn, was published on Wednesday 19 June. Read it here.

Jamie Fairbairn and Claire Needler’s project, ‘Local language, school and community: Curricular innovation towards closing the achievement gap’, won the British Curriculum Forum’s Curriculum Investigation Grant for 2018/2019. The grant is awarded biennially to support research led by schools and colleges with a focus on curriculum inquiry and investigation. Click here for more information.

Council of Europe (1992). European Charter for Regional or Minority Languages. Retrieved from https://www.coe.int/en/web/conventions/full-list/-/conventions/treaty/148 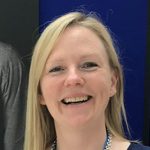 Claire Needler is an ethnology PhD student in the Elphinstone Institute, University of Aberdeen. Her current research area is contemporary use of the Scots language among young people in the north east of Scotland. She is particularly interested in changing attitudes towards Scots through education using creative methodologies and participatory action research. Having worked as a lexicographer and a community educator, working in partnership with Banff Academy’s Scots language class has enabled her to combine her interest in working with words and with people, with a strong underpinning of social justice.

It’s time to talk about language