Societies in many parts of the world are still dealing with the colonial legacy of educational systems that served a privileged few. Efforts are constantly made to redress the resulting historic imbalances by innovating curricula to promote social justice. Two issues that are often talked about in this context are ‘decolonisation’ and ‘development’ (see Tavernaro-Haidarian 2018). How are these terms usually understood, how can they be thought of differently and what role do they play in shaping contemporary educational efforts? In this piece I introduce understandings of development and decolonisation that are particularly well-suited to advancing social justice. I also highlight an initiative called Education for Justice – a program that exemplifies what this could look like in practice.

Development is usually thought of as a means of promoting the interests of global capitalism through economic instruments. However, because countries around the world don’t have an equal footing when it comes to economic and industrial resources, this way of thinking perpetuates the power of those who are already ahead in the game. That is why Sen (1993) and others offer alternative ways of thinking about development – as, for example, a process that advances freedom. In a similar vein, Swanson (2012) talks of development as ‘humble togetherness’, or as a ‘re-sourcement’ towards prosperity and healing. We can build on the idea and think of it also as ‘mutual empowerment’ in both a material and immaterial sense (see Tavernaro-Haidarian 2018).

‘One powerful alternative way of rethinking decolonisation is to see it as an integrative, collaborative and ‘constructive’ process of ‘resilience’ – one that ‘builds’, ‘evolves’ and ‘transcends’. Education for Justice is an example of what this can look like in practice.’

In a similar way, the idea of ‘decolonisation’ can be re-imagined. Ironically, efforts to decolonise have often been coloured by neoliberal understandings of social change as ‘rebellions’, ‘secessions’, ‘struggles’ or ‘dismantling’ strategies. As a result, educational efforts that are oriented in this way can do little more than that – namely, to break down what has been inherited. But what do we build in its place, how and with whom? One powerful alternative way of rethinking decolonisation is to see it as an integrative, collaborative and ‘constructive’ process of ‘resilience’ (see Tavernaro-Haidarian 2018; Baha’i World Center 2007) – one that ‘builds’, ‘evolves’ and ‘transcends’.

An example of what this can look like in practice can be found in an initiative called Education for Justice. Developed by the United Nations Office on Drugs and Crime, Education for Justice consists of a series of open-source educational modules that span a range of topics associated with promoting social justice and building a culture of lawfulness (UNODC 2018). Its tertiary level modules are co-created by more than 600 academics from over 550 universities in 114 countries worldwide, thereby combining theories from the global North and South (UNODC 2019).

Beyond its content then, what stands out is the participatory way in which materials are generated and then explored, applied and studied. Academics interested in the materials collaborate with colleagues and students and then feed back into the global conversation that is constantly shaping and re-shaping them. These ‘living’ and ‘growing’ modules can be used as standalone teaching resources or as a means of enhancing existing courses, and can be applied in part or evolved and modified according the needs and cultural context at hand (see UNODC 2018; 2019). As such they embody a continued and participatory process of design, action, reflection and refinement rather than a static curriculum designed by some and intended for others. It is not only the materials that promote social justice, but more importantly the process – its collaborative synthesis and application – associated with it.

In short, a posture of learning and mutuality characterises Education for Justice, making it more of an educational ‘approach’ than a curriculum. It can be easily replicated in many contexts and for many subjects. By generating co-designed, co-studied curricula, with lecturers seeing themselves, together with other educators and students, as facilitators and collaborators, the program advances understandings of development and decolonisation that fulfil the needs of a truly global community in a rapidly evolving and post-colonial world.

Baha’i World Center (2007, September 9) Message to the Baha’is of Iran. [Letter to ‘the Baha’i students deprived of access to higher education in Iran’]. Haifa: Universal House of Justice. https://news.bahai.org/story/577/ 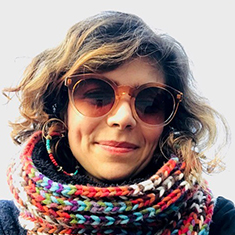 Dr Leyla Tavernaro-Haidarian is a senior research fellow at the University of Johannesburg and a consultant for United Nations System Staff College, where she is a faculty member of the Leadership, Women and the UN program. Her areas of expertise include media, communication, leadership, ethics, education, development and governance. Leyla regularly lectures and keynotes at international fora such as TEDx, the US State Department, NATO Building Integrity and the UNSSC/University of Stellenbosch Business School MBA program in managing international organisations and continues to produce television content for Persian Baha’i media services. She serves on the editorial board of an international communication journal, and is a member of the South African Communication Association as well as the Young Academy of Science. Leyla is also a South African Women in Science Awards nominee.