Those who study and work within education know that it is not just the explicit, intentional content that is taught in schools and that results in learning. Moment-to-moment transfers of meaning occur sometimes fleetingly, sometimes covertly, yet often powerfully in the learning of teachers and students. These exchanges construct meanings about successful or desirable identities, acceptable or unacceptable behaviours, and also about what knowledge is important or valuable. When we learn at school we learn much more than what is intended. However, we are also active teachers of this knowledge. Regardless of our status in schools we constitute and communicate dynamic meanings about objects, people or behaviours.

‘Gender and other intersectionalities are at the heart of how violence is done and responded to. If we fortify gendered meanings in our responses to violence, there is little hope for meaningfully disrupting violence at school.’

A crucial part of this learning and teaching is the punishment of those that ‘get it wrong’. By ‘it’, I mean anything – the length of your skirt, the type of bag you have, the style of your hair (Ringrose & Rawlings, 2015) or the things that you talk about. As Michel Foucault has argued, discipline is a policing force that constructs ‘normal’ and valued identities, behaviours and objects (and configurations of these), while simultaneously constructing abject others (Butler, 1993). ‘The whole indefinite domain of the non-conforming’ (Foucault, 1991, pp. 178–179) is a possible target of social and cultural punishment. One particularly helpful lens through which we can understand much of this policing is gender.

Gendered violence in school can be diverse in nature; it is often identified as homophobia, transphobia, sexual harassment, sexual assault or any other behaviours that identify and target particular genders or sexualities. This type of violence is contextual: it varies across time, space and place. It will depend on school climate, school culture, and the cultures and contexts that surround the school. A key factor in all cases, however, is that there is an identification and policing of dominant gender and sexuality norms.

You’ll note that I’m resisting using the word ‘bullying’ here, in favour of the word ‘violence’. This is an intentional substitution, as ‘bullying’ is somewhat inadequate in capturing much of the violence that takes place in these environments. The definitions of ‘bullying’ that educational institutions, particularly schools, rely upon are often extraordinarily narrow and unforgiving in their rigidity.

In my recent article for the British Educational Research Journal (Rawlings, 2019), I detail one such example of discipline and the impact of a variety of bullying discourses to account from it. In short, a young woman was physically assaulted by a group of young men that attended school with her, for her reputation of being a ‘slut’. This was part of a Facebook event designed for the school called ‘kick a slut in the head day’. While this event and its violence may seem confronting, it is additionally helpful for us to think about how both students and teachers actively construct this event through their dialogue. My paper asks what systems of meanings they draw from, and specifically what discourses are present in their accounts.

In this case, students largely relied on discourses of ‘joking’ – that the assault was a good joke that had gone too far – or that it wasn’t really ‘bullying’ (or violence) because there wasn’t enough intent to harm. Teachers similarly resisted allocating the term ‘bullying’ to it for a variety of reasons. They indicated that the event was ‘making fun’ (similar to joking), that there weren’t many students involved, and that it was a ‘one off’ event – and therefore did not qualify as bullying (which must be repeated and intentional).

What was common between both sets of accounts, however, was the attribution of participants of gendered meanings. The students mentioned that boys are ‘just like that’ (that is, likely to be violent towards young women), and that there was little that you could do to stop it. The teachers also constructed particular girls as deserving of the violence, dependent on their sexual reputations.

Crucially, these linguistic attributions constructed realities in the immediate moment of this event, but also into the future. Those that experienced these events and the discussion around them were ‘schooled’ and ‘schooling’ the meanings of gender and the violence that comes with it in the particular context. Going forward, these lessons will continue to shape their actions and understandings of how to be a successful (and safe) person in this environment.

Without discourse there is no meaning. Reflecting on the meanings we bring to situations of violence, discipline and the setting of social hierarchies is crucial if we are to be able to meaningfully understand and confront how violence operates in schools. To put it simply, gender and other intersectionalities are at the heart of how violence is done and responded to. If we fortify gendered meanings in our responses to violence, there is little hope for meaningfully disrupting violence at school.

This blog post is based on the article ‘”It’s not bullying”, “It’s just a joke”: Teacher and student discursive manoeuvres around gendered violence’ by Victoria Rawlings.

It is is published in the British Educational Research Journal, and is free-to-view for a limited period, courtesy of the journal’s publisher, Wiley.

Foucault, M. (1991). Discipline and Punish: The Birth of the Prison. London: Penguin Books. 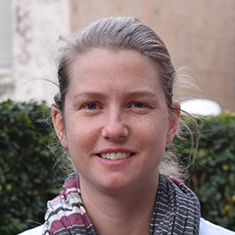 Victoria Rawlings is an academic fellow in the School of Education and Social Work at the University of Sydney. Her research focuses on the intersections between gender, sexuality, youth and social structures. Vic continues to research and teach about the ways that traditional concepts of 'bullying' fail to address violence in schools.