Open educational resources (OERs) are learning, teaching and research materials in any format and medium that are freely available in the public domain. Current discussions about OERs are generating significant interest in how these resources can widen access to and increase the quality of education. This interest in OERs has been further increased by the Covid-19 pandemic, with OERs reported to have supported the continuity of education during school closures (Unesco, 2020).

In some ways, OERs have succeeded in standing up to their moral mission of increasing access to education. These resources have, indeed, provided learning at scale, with the major OER platforms receiving millions of visitors each year. A worldwide reach, however, does not necessarily translate into universal accessibility and use. In fact, open education initiatives are critiqued for being subject to (over)inflated expectations as change agents (see for example Lane & McAndrew, 2010; Coughlan & Goff, 2019). Despite the aspirations to fundamentally open up education, OERs are still mainly used by well-educated learners residing in the global north, and most OERs are offered in English (Farrow, de los Arcos, Pitt, & Weller, 2015).

‘Despite the aspirations to fundamentally open up education, OERs are still mainly used by well-educated learners residing in the global north, and most OERs are offered in English.’

Despite the scepticism regarding the ability of OERs to widen access to knowledge globally, very few studies have explored the language level of existing OERs and their accessibility to non-native English speakers. In our paper, ‘Accessibility of Open Educational Resources: How Well are They Suited for English Learners?’, we examined text complexity of 200 OER reading materials across different educational levels and subject categories (Rets, Coughlan, Stickler, & Astruc, 2020). The OERs were taken from two major OER course platforms – OpenLearn (2020) and Saylor (2020). Each OER platform assigns an educational level to the courses they offer, suggesting the order in which these courses should ideally be followed and the educational level (undergraduate/postgraduate) each course is suitable for. Both OpenLearn and Saylor also offer courses across a variety of subject categories.

Among the research methods used in the study were readability analysis, statistical tests and cluster analysis. The study showed that more than 86 per cent of the courses on either OER platform require an advanced level of English language proficiency. As a result, the current language level of the OERs excludes non-native English speakers with low English language proficiency. Furthermore, while we initially hypothesised that the text complexity level of OERs would increase as the educational levels become more advanced, the study in fact yielded no systematic differences in text complexity across the different educational levels of the OERs.

This study was also concerned with the differences in the text complexity level of the OERs across subject labels, with the aim to identify whether there is a subject in which particular effort is needed to make texts accessible. Having triangulated the data from two types of analysis, the study showed that the subject matter does not appear to be linked with the text complexity of the course materials.

This study has two important implications for text writers and material designers:

This research makes a case for raising the awareness of OER educators about the current complexity level of English language OERs, and about the gap between many potential OER learners’ language abilities and the learning materials that purportedly enable inclusive education. 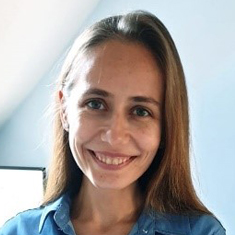 Dr Irina Rets is a doctoral researcher in educational technology at the Open University (UK). She also holds a doctorate in applied linguistics from Volgograd State University (Russia). Her research expertise focuses on online collaborative learning, accessibility of education to international learners, as well as online measures of learning behaviour. More information about Irina’s work is available on her university profile page. She also actively tweets about higher education issues, learning and research methods @IrinaRets.