Listening to children is commonly associated with improving educational environments. Many educators believe that granting children more opportunities to express their voices can promote verbalisation skills and boost academic performance. In many schools, the pedagogy of the community of inquiry is adopted to meet such instrumental ends.

It is also common to talk about the importance of children’s voices as a resource to improve the quality of life. Since children have thought-provoking perspectives on almost everything, their utterances are welcomed as novel, or enchanting. This stance fits with the promotion of creativity as a core competence for innovation and entrepreneurship in neoliberal societies.

Concepts such as ‘inclusion’ and ‘rights’ have permeated discourses about childhood in a striking and unquestioned way. These words have become popular slogans in movements advocating for children and their right to participation.

Discourses on listening and voice often reproduce an adultist, rationalist bias in educational relationships. What do we ask children? What do we hear in their answers? Do we really acknowledge that children have a voice of their own? Or are we just listening to what endorses our own experiences? What if using the words ‘voice’ and ‘listen’ is not enough (Lundy, 2007)? Should we return to those very same words?

Listening could mean assuming a position of ‘philanthropic oversensitivity where condescension resounds alongside good intentions’ (Nancy, 2007, p. 4). But it can also be an experience that goes beyond adult paternalism, focusing on the tone, timbre and resonance in the voices of children. This entails an attitude of openness to everything that comes to our ears, even when there is dissonance and noise (Johansson, 2013) – and especially when there is dissonance and noise, because it is our capacity to welcome the unexpected that will take us to voices that truly challenge us. The epistemological, ethical and political challenges of education may only begin in this kind of listening (Haynes & Murris, 2012). 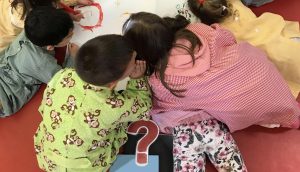 Voice is often understood mainly in a metaphorical sense, meaning listening to a ‘child’s perspective’ on certain subjects, playing down the phonetic of children’s utterances. This focuses on the semantics of speech, rather than on its acoustic record, privileging the meaning over the sound. But a voice corresponds to a ‘living person, throat, and chest, feelings, which sends into the air this voice, different from all other voices. A voice involves the throat, saliva, childhood, the patina of experienced life, the mind’s intentions, the pleasure of giving a personal form to sound waves’ (Calvino, 1988, p. 66). Neglecting the material, bodily dimension of the voice limits children’s intervention to content and meaning. Forgetting the sound of their voices corroborates a mental, disembodied conception of thought (Cavarero, 2005). Is this devocalisation of the voice of childhood at the service of adults’ understanding of rationality (thinking as a mental articulation of ideas, exempt from the material traces of the body who expresses it)? Is education trapped in this hegemonic perspective, aiming to purge students from the ethical and political forces of childhood?

Could we return to an educational experience of children’s voice and listening that goes beyond these biases? The community of philosophical inquiry (Kennedy & Kennedy, 2012) may be the space-time that brings back an embodied and childlike construction of shared thought, but only if it embraces the challenges of returning to the very sound of children’s voices. And, above all, to question what we have been doing with those voices, epistemically, ethically and, above all, politically (Murris, 2013). Throats and ears at the beginning; an open road that follows.

‘The community of philosophical inquiry may be the space-time that brings back an embodied and childlike construction of shared thought, but only if it embraces the challenges of returning to the very sound of children’s voices.’

When we are truly committed to listening to children, it forces us to consider what counts as knowledge and what counts as a ‘worthwhile’ contribution in the framework of an educational encounter. It brings us face to face with the politics of ‘voice’ and with presuppositions and expectations about what adults think children can or should say, and how it should be said. We realise that even when we set out to attend to children’s rights, the adultist and rationalist framework of what matters in education-as-usual might be deeply exclusionary. A helpful challenge could be to ask ourselves: who is really entitled to speak in school? And are we really listening?

Cavarero, A. (2005). For more than one voice. Toward a philosophy of vocal expression. Stanford University Press. 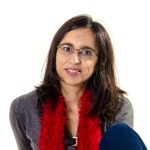 Professor of Philosophy at University of the Azores

Shutting up to promote children’s and young people’s voice