In 2014, ReadingWise invited us to carry out an independent study of its Computer-Based Literacy Programme for Accelerated Reading Acquisition. Following exploratory meetings, schools and adult learning centres in eight locations throughout England agreed to participate in the evaluation.  The 100 or so participants ranged in age from 6 to 50.

The theoretical underpinning for the study draws on the work of Andrea Gaggioli and colleagues (2013) who adopted the concept of Flow developed by Mihalyi Csikzentmihalyi (1990), to examine heightened experiences when using technology and associated learning improvements. The essential purpose of the ReadingWise programme is to increase reading age and enhance self-confidence and self-efficacy. The four key components of Flow – control, attention, curiosity and intrinsic interest, were used to measure these effects. This was achieved through observations; questionnaires; interviews and focus groups involving the students, their supervisors and senior leadership personnel from the participating institutions.

20 key learnings were identified in the evaluation report, summarised here under seven headings.

Twenty to thirty minutes a day over the period of a school term was recommended as an optimum period of time for engagement with the programme. This did, however, prove challenging for some of the selected schools, where three sessions per week were advised. While lunchtimes were sometimes preferred because they did not disrupt lessons this was not always popular with young people.

In schools the selection of pupils was discussed at length.  Initially there were concerns that children on the programme might be teased or be subject to discriminating labelling. It came as a surprise to many that there was no stigma attached to pupils who were on ReadingWise.

The power of place: Behaviour settings

In the ReadingWise context the question is to what degree the setting influences, or even dictates, behaviour. While schools were, on the whole, aware of this, there was not always the choice and flexibility to find the optimum environment.  The mobility of new technology, like tablets, may open up opportunities that did not exist before.

The beauty and challenges of technology

For a large majority in the study, ICT was arguably the most comfortable and the most effective medium. This offers a challenge not only to programme designers but to the ingenuity of teachers and school leaders in evaluating and extending children’s learning repertoire.

An impressive feature of the programme is the self-management of the users, particularly striking in the case of children who, in the day-to-day school routine, have become used to waiting to be told what to do. With ReadingWise, children would come into the room, engage immediately with the programme, concentrating throughout and when told it was time up, put away their PCs and earphones and quietly exit the room and go back to their classes.

ReadingWise runs two-hour training sessions before a site embarks on the programme, working with relevant staff to ensure the availability and effectiveness of equipment, using dashboard features and accessing the programme from a learner’s perspective. Staff were very happy with the training they had received, that enabled them to explain the programme to the learners. One member of staff described the programme as ‘intuitive’, helping students to build confidence when they could see and hear that they are getting things right.

Highly influential research by Carol Dweck on what she terms Mindsets illustrates the power of a growth mindset. Changes in mindset may be measured by students’ own self report as to their feelings and growth in confidence.  The number of positive comments from children and young people far outweighed negative comments. The positive impact on adult students, as reported by the supervisors, was owed to building confidence, the satisfaction and reinforcement of getting things right.

The evaluation began in early 2015, running simultaneously with continuing improvements to the programme. In this respect the evaluation played a both summative and formative role. Issues arising were fed back to the team, given that it would have been unfair on children and staff to leave them to continue repeating the same mistakes.  It was apparent that ReadingWise was able to open doors that, to many, had been previously closed, and that enthusiasm for learning had been re-ignited.

This is, however, a continuing story rather than a tale fully told.  There remain areas still to be addressed. The challenge is to the ingenuity of the ReadingWise team, its receptivity to evidence and continuing commitment to improvement. 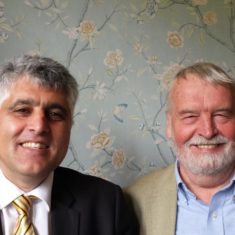 Professor John MacBeath O.B.E. is Professor Emeritus at the University of Cambridge. From 1997-2001 he was a member of the Government Task Force on Standards. Consultancies have included the OECD, UNESCO, the Bertlsmann Foundation, the European Commission and the Education Bureau in Hong Kong. He served as President of the International Congress on School Effectiveness and Improvement from 2007-2009. He is currently President of the International Professional Development Association. He was awarded the OBE in 1997 and an honorary doctorate from Edinburgh University in 2009.

Dr Alex Alexandrou is a freelance academic and has worked extensively in the fields of education, evaluation, leadership, and continuing professional development, as an academic and practitioner. His particular interests and expertise are in leadership, ethics, policy, professional development and workplace learning representatives. He is a Visiting Professor at the Toulouse Business School where he has been involved with the Aerospace MBA for more than a decade.