The importance of studying history is well-established in the educational structure of the United Kingdom. This status is reflected in the popularity of the subject in compulsory and post-compulsory education. For A level qualifications (typically obtained between 16 and 19 years of age, and the most common qualifications route to university study) history is the fourth most popular subject, recently overtaking Chemistry in the latest set of official figures from the UK-based Joint Council for Qualifications.

It is perhaps surprising that there is little agreement on the historical topics that are most appropriate for A level students to study. This lack of consensus is likely the result of different imperatives guiding the teaching of history. Community knowledge perspectives place an emphasis on history to facilitate learning about accepted values and practice, so that individuals are able to learn how to operate in society. This is closely related to Barton and Levstik’s (2004) notion of identity formation. In this view, individuals’ sense of public responsibility and shared action is strengthened when it is grounded in the study of a nation’s history; a point illustrated by the quotation of the English philosopher R.G Collingwood that opened this blog.

Interestingly, political rhetoric related to History education often revolves around the creation of a sense of national identity and belonging. In 2010, the then UK Secretary of State for Education Michael Gove said that, the study of History across the curriculum should focus on “our island story”. This movement towards Anglo-centrism has been criticised as potentially neglecting cultural and social History in favour of ‘chronological big stories’. Indeed, as students are likely to inhabit multiple identities stemming from their ethnic background, culture, language and religion, it has been argued that this diversity should be acknowledged in History courses.

In response to these tensions, UK awarding bodies that are responsible for developing A levels within the regulatory framework set out by the UK government, have tended to offer candidates topic choice within the structure of their qualifications. The decision regarding which topics to study within a history qualification typically rests with the head of department, who has to consider several interacting factors. In a research project conducted by Cambridge Assessment’s Research Division, we found that centres tended to aim for curriculum coherence within the qualification. Over 60% of centres surveyed studied modern history exclusively, and centres tended to teach students about topics related to World War II, Russia, and the USA. Those centres that selected medieval and early modern history topics typically opted to study the Tudor period (c1485-1603).

#Taken together, these findings suggest that teachers sought to teach particular periods of history in great detail (known as the ‘bore hole effect’) rather than a range of historical topics. The question here is: why do these periods of history dominate? Survey analysis revealed that heads of department were primarily concerned with student engagement with course content, expertise of the teachers in their departments, and resource availability and quality. It is likely that there is an interaction between these three factors. Heads of department may focus on well-established topics of history in order to achieve a balance between the resources available to the school department and assumed knowledge of the cohort of teachers within the department. If teachers are comfortable with the topics covered and their support via resources, this in turn should lead to student engagement.

The future of A level history

In times of curriculum and qualifications reform, A level history teachers have to re-consider the factors identified above. Following a review conducted by Professor Mark E. Smith at Lancaster University on behalf of the UK regulatory body Ofqual , an ‘enforced optionality’ approach has been adopted. History A level courses have to be structured so that candidates study topics across at least 200 years of history, and study more than one country or state. This period of reform has provided an opportunity for awarding bodies to introduce a broader range of historical topics. For example, the new OCR A level specification includes the topics The Rise of Islam (c550- 750), Japan (1853-1937) and African Kingdoms (c1400- c1800). What is uncertain (and ripe for future research) is how these reforms will influence the scope of topic choice by centres, or the cohort of students that opt to take history at A level. Post-reform analyses of this type may provide further indications of what motivates students to study history. 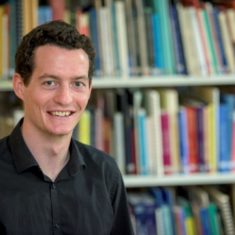 Simon Child received his Ph.D from the University of Manchester in December 2011. His work focused on the development of symbolic cognition in pre-school children, specifically the relations between pretend play, speech and gestural communication. After a short-term position at the University of Liverpool, in 2012 he moved to Cambridge Assessment to work as a Research Officer in the Assessment Research and Development Division (ARD). In this role he conducted research that facilitated the development of general qualifications in the United Kingdom, and investigated aspects related to quality of marking. In August 2015, he moved to OCR (a UK awarding body which is part of Cambridge Assessment) as a Senior Researcher in the Research and Technical Standards team.