Worldwide, socioeconomically disadvantaged students have lower average attainment outcomes at school, and poorer opportunities once they have left school. In England, poorer pupils are also heavily clustered in particular economic regions, areas of housing and schools. This socioeconomic ‘segregation’ causes damage by lowering aspiration and participation for individuals, and reducing social cohesion.

Pupil premium funding was introduced in England in 2011 to reduce both socioeconomic segregation and the attainment gap. Some commentators are now saying that the pupil premium is ineffective, and calling for the money to be used for school general funds. The all-party parliamentary group on social mobility suggested that it should be renamed the ‘social mobility premium’, and used to develop and retain teachers. With this kind of uncertainty about its likely impact and future, we urgently need to know whether pupil premium works as intended. The results are important nationally, regionally and for individual schools, as well as for other home countries of the UK, and for the proposed student premium in HE. However, neither outcome (segregation or attainment) has yet been evaluated properly.

‘How can we judge what difference the Pupil Premium has made to school intakes and outcomes in England?’
Stephen Gorard & Nadia Siddiqui

No prior studies have looked specifically at the impact of the pupil premium on segregation. Some studies of the attainment gap have looked only at the years since 2011, which provides no counterfactual at all. Others have taken no account of policy changes, such as that the number of eligible pupils have been affected by the move towards a net earnings threshold for universal credit, or economic changes such as the number of pupils receiving free school meals (FSM) increasing in the 2008 recession. FSM is the major determinant of pupil premium funding. There is also annual and local variation in the proportion of FSM-eligible pupils who have been not been eligible in previous years. Short-term eligibility is more common in a recession. This matters because with every year for which they recorded as FSM-eligible, pupils’ levels of attainment, and their Progress 8 scores, plummet on average. This means that the attainment gap for FSM-eligible pupils, compared to pupils never eligible for FSM, is also substantially greater for every year that pupils are known to be eligible for FSM (see figure 1).

Figure 1: KS4 attainment gap by number of years for which pupils are known to have been eligible for free school meals 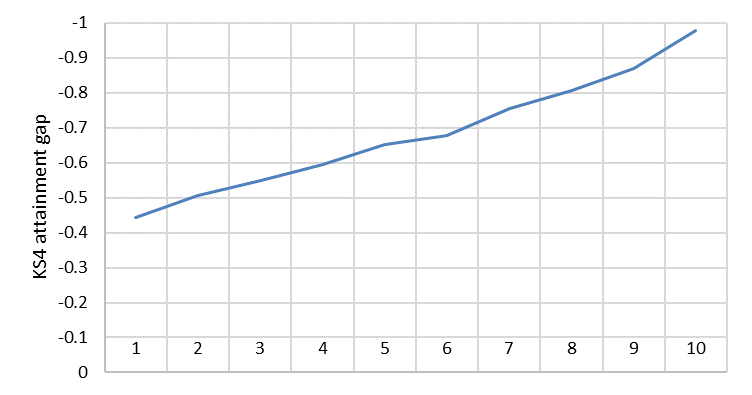 These examples mean that a pupil who would attract pupil premium in one year may not do so in another, in a way that has nothing to do with changing schools or improving attainment. Comparisons are also complicated by the fact that the proportion of pupils missing registration for FSM varies over time, partly caused by changes in the incentives for schools to pursue registrations. Pupils for whom FSM-eligibility data is missing tend to be even more disadvantaged than FSM-eligible pupils, and gain lower qualifications at every stage of education. Because they are missing the relevant data they are usually either ignored in the attainment gap calculation or added to the ‘not disadvantaged’ group, thereby distorting it. These pupils’ missing data are not evenly spread, making the results for poorer areas and schools especially misleading. Further complications arise from educational changes such as the abolition of key stage 3 levels in 2015 and new GCSE grades in 2017, and from the fact that the intake to private schools varies from around 6.5 to 7.5 per cent annually, and from 0 to near 50 per cent by local authority. As I have shown, this also affects the apparent attainment gap and segregation results, in a way that has nothing to do with changing schools or improving attainment.

Current approaches do not work, and give very misleading results nationally, locally and for specific schools. Instead, we need analyses that account for changes in the law, economic conditions and the prevalence of pupil-premium pupils, in a way that makes them comparable for many years both before and after the introduction of the policy. The early results of this new analysis for segregation and the attainment gap, and our further plans, will be presented at the BERA Conference 2019 in Manchester, 10–12 September.

This research was funded by by ESRC grant ES/N012046/1. Click here for more details on the project.

For more about the Durham University Evidence Centre for Education see www.dur.ac.uk/dece / @DECE_DU 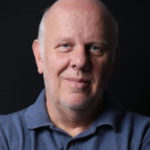 Stephen Gorard is professor of education and public policy at Durham University, and director of the multi-disciplinary Durham University Evidence Centre for Education. He is a fellow of the Academy of Social Sciences, and lead editor for BERA’s Review of Education journal. His work concerns the robust evaluation of education as a lifelong process, focussed on issues of equity, especially regarding school intakes. He is author of around 30 books and over 1,000 other publications. He is funded by the ESRC to investigate measures of educational disadvantage and how such measures can be used for educational improvement.