Writings about faith and education tend to fall into particular longstanding debates about: the teaching of religious education in schools; the act (or not) of assembly; the use of religious texts in lessons and around the school; the roles of faith-specific schools in society and their practices; the nature of truth in science, and similar themes (see for example Copley, 2008). There is, however, a dimension of faith and education that is almost entirely missing, and that is the faith-orientated beliefs of those who work in education, and how these are enacted in, and impact on, their work (for a rare example, see Palmer, 1998; see also Rowe & Watson, 2018).

‘Accounts of the faith-orientated beliefs of those who work in education, and how these are enacted in, and impact on, their work is almost entirely missing from the literature.’

Yet many young people enter teaching because their faith leads them to want to ‘give back’, or because they want to help young people to develop in a holistic, not merely intellectual, way, or because they have a faith-based view of society that attaches great importance to values such as care, justice, truth and integrity in public service. These reasons for entering teaching are not confined to those who have a religious faith, of course, but apply also to young adults for whom the same human values are important lodestones.

Social media and teacher-facing publications frequently include stories of people who have left the profession, or stayed in education but left the classroom, because the way in which they were expected to do the job clashed with their principles and preferred ways of working to such an extent that they were unable to continue (see Murrer, 2018; Buchanan, 2018). In the recent past, we have heard from a young teacher who was forbidden to put up wall displays because her teaching room was also hired out for conferences; a teacher who was told to prepare all her lessons for the year ahead, before even meeting those she was to teach; a teacher who was put into competence procedures for not conforming to paperwork norms while students (many from other teachers) flocked to her classroom for extra help during lunch time; we could go on. The practice of teaching is inescapably values-rich and schools are prime sites of value conflict – certainly between teachers and parents (Stengel & Tom, 2006), but also between teachers themselves and the school authorities.

Quakers are one example of a faith group which has a long history of involvement with education – from the seventeenth century, originally with schools for girls as well as boys (O’Donnell, 2013).Currently few Quakers attend or teach in the independent schools that are historically Quaker; most Quakers who work in education do so in the state-maintained system. In recent years, the Quaker Values in Education group (qvine.org.uk) has heard many stories from individuals whose work in education is difficult to sustain because what schools expect them to do, as well as the workload issues that impact one everyone, is beyond what they feel is right, just and caring. This is not only true for Quaker teachers of course (Bousted, 2016). In our meetings, time and again teachers have said, ‘this is not why I came into teaching’ when describing practices such as zero-tolerance regimes; frequent test-ing; prescriptive marking expectations, and many other imposed practices which make it hard for them to respond to individual children’s needs and difficulties in a life-enhancing way (Murrer, 2018).

And yet, schools are and always have been communities as well as knowledge factories, and no community exists without values (see for example Halstead & Taylor, 1996). Although official curriculum documents rarely mention values alongside all the other desirable learning outcomes, there is abundant evidence, including in our recent book (Rowe & Watson, 2018) that teachers place huge importance on embedding values in the curriculum as well as throughout the ethos of the school.

We therefore set out to collect essays from Quakers who work, or have worked, in the state system. We have found ways to work and think about education while maintaining integrity – that is, while basing one’s work soundly in the Quaker testimonies to truth, equality and justice. The result is a collection of papers, mainly grounded in practice, that are critical and visionary about education and schools, but based in real experience so that the accounts do not describe, ‘this is what I wish it was like’ but rather, ‘this is what it is like, or has been like, or can be like, somewhere’.

The result is Faith and experience in education: Essays from Quaker perspectives edited by Don Rowe and Anne Watson, published by Trentham Books at UCL IOE Press in May 2018.

Bousted, M. (2016, April 19). Our children are being set up for failure, stress, disappointment and disaffection. Times Educational Supple-ment. Retrieved from https://www.tes.com/news/our-children-are-being-set-failure-stress-disappointment-and-disaffection

Palmer, P. J. (1998). The Courage to Each: Exploring the inner landscape of a teacher’s life. San Francisco: Jossey Bass. 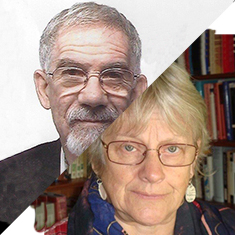 Don Rowe taught a range of subjects in secondary and middle schools for ten years. In 1984, he became director of the National Curriculum Council’s Law in Education project which pioneered law-related education for all upper-secondary students as an entitlement. He was involved in establishing the Citizenship Foundation, becoming its first director in 1989 and, subsequently, director of curriculum resources. He was very involved in the introduction of Citizenship Education into the curriculum in 2000. He also worked for many years as an international consultant specialising in education for democracy and human rights. He has published a range of teaching and training materials, plus a number of academic papers in citizen-ship and moral education. As a Quaker, he has a particular interest in education for peace, justice, values-based education and moral development, not merely within the curriculum but as a whole-school practice.

Anne Watson has two mathematics degrees and a DPhil in mathematics education. She taught mathematics in comprehensive schools serving some fractured communities, before moving into academic work, training secondary mathematics teachers and researching mathematics education. With a social justice agenda, she has focussed on how young adolescents can become empowered through inclusion in mathematics. While professor at the University of Oxford she worked internationally and nationally with teachers and teacher educators and, more recently, has developed a critical and informed position towards policy and curriculum matters in England. See PMTheta.com for more information.