It is observable that display boards are being applied widely by primary schools as visual representations for learning about the stated fundamental British values of democracy, the rule of law, individual liberty and mutual respect, and tolerance of those with difference faiths and beliefs (DfE, 2014). This appears to be a common approach to practice by primary schools in reaction to the implementation of The Prevent Strategy (HM Government, 2011), a counter-terrorism educational policy that seeks to arrest the potential of children becoming radicalised by terrorist organisations. A new academic year is here! Primary schools are busily preparing fresh display boards with imagery to inspire children’s learning. Will display board imagery to represent fundamental British values be refreshed, or remain the same as last academic year?

The interest of our study was on the primary school, as a site of representation in providing powerful grounds on which political and dominant cultural discourses of national identity can be reified as a regime of truth (Foucault, 1980).

The dominant images of cultural icons involving people across the display boards were Queen Elizabeth II and former Prime Ministers Winston Churchill and David Cameron. Collectively, these images alongside national symbols i.e. union flag and cultural symbols i.e. the red poppy, appeared to appeal to the past; to blood ties; to shared practices and understandings for upholding the meaning of British identity in the present. Collective images of White British cultural icons, national and cultural symbols as representative of fundamental British values can be associated with a discourse of ethnic nationalism (Ignatieff, 1993).

As a follow up to our findings, semi-structured interviews with three full-time qualified primary school teachers were conducted in response to images of the fundamental British values display boards from the internet search. The key question was:

The teachers all agreed that Figure 1 (below) was the most fitting in representing  fundamental British values for shared sense of British identity (Moncrieffe, 2017). 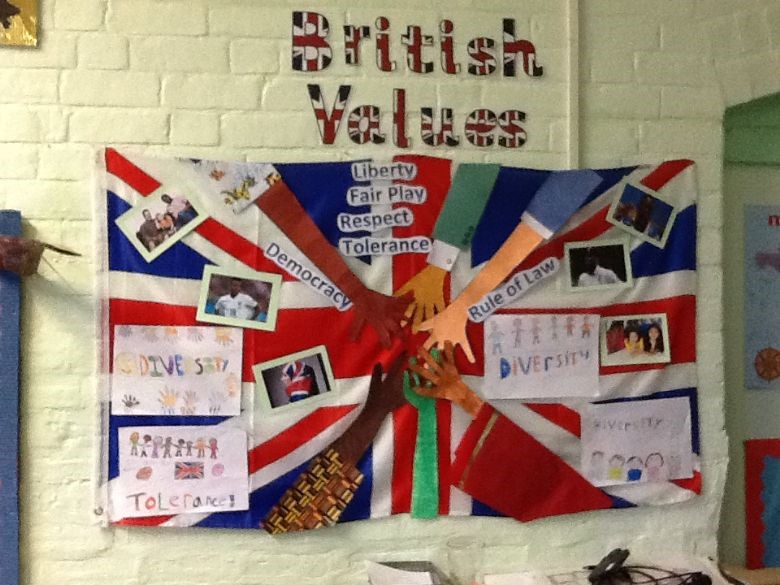 The teachers articulated words and phrases aligned closely to the notion of civic nationalism, a pluralist democracy and where individuals create their nation (Ignatieff, 1993). Interestingly, Figure 1 was the only display board from the Stage One analysis which did not display images of cultural icons such as Queen Elizabeth II, former Prime Ministers or cultural icons and cultural symbols related to the city of London.

All teachers agreed that Figure 2 (below) was least fitting in representing  fundamental British values for a shared sense of British identity (Moncrieffe, 2017). 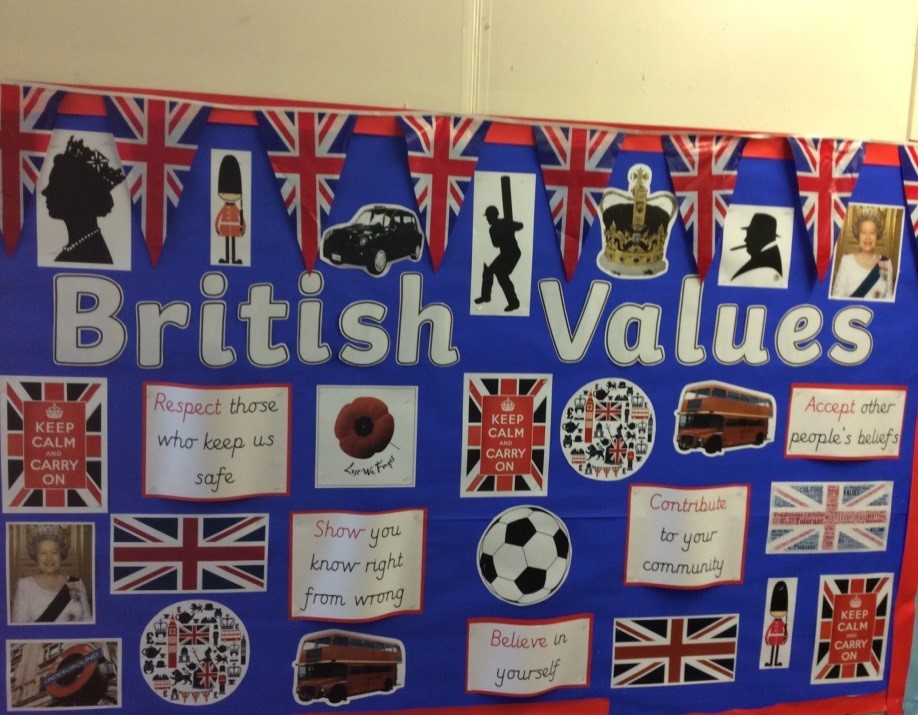 Similar versions of Figure 2 have been commodified by ‘educational’ companies for sale over the internet, in the same way that timetables posters are for teaching and learning mathematics. Where 5 x 4 = 20, or 6 x 3 = 18, Britishness x British values = Queen Elizabeth II, Churchill, Cameron, Cricket, Routemaster bus and Fish and Chips. Specific images as representations of fundamental British values appear to be taken as a given. At this busy time of year, should primary schools therefore save their time and thinking about display boards, by simply purchasing these ready-made posters, thus fulfilling their statutory requirement not to undermine fundamental British values (DfE, 2013)?

Dr Marlon L. Moncrieffe is a Senior Lecturer at the School of Education, University of Brighton, UK. He is formerly a primary school Deputy Head teacher. He teaches Education Studies on post-graduate and under-graduate courses. His research interests focus on the Key Stage 2 history curriculum presentation of British history for a sense of identity and nationhood and the potential of critical approaches to practice in engagement with these made by trainee-teachers. He presented his work at the BERA Conference, University of Sussex in September 2017.

Audrey Moncrieffe is a primary school teacher. She is also a Masters candidate at the School of Education, University of Brighton. She has over 20 years of teaching experience. Her research interests focus on teaching and learning in the primary school through visual imagery. She presented her work at the BERA Conference, University of Sussex in September 2017.

Who wants to be an academic?