I have been busier than I expected in the time since I stepped down from being BERA’s President and Vice President. Like a number of other BERA colleagues I have responded to invitations to talk to groups of school leaders about how they might rise to the challenge of assessing without levels.

I felt I had a responsibility to engage with this issue because, as a member of the Expert Panel to the National Curriculum Review in 2011, I was implicated in Michael Gove’s decision to get rid of NC Levels. In our report we argued that:

[The levels system] distorts pupil learning, creating the tragedy, for instance, that some pupils become more concerned for ‘what level they are’ than for the substance of what they know, can do and understand. (NCR EP Report, para 8.4)[1]

…all assessment and other processes should bring people back to the content of the curriculum (and the extent to which it has been taught and learned), instead of focusing on abstracted and arbitrary expressions of curriculum such as ‘levels’.(NCR EP Report, para. 8.24, my emphasis)

I stand by these conclusions and believe that the decision to get rid of levels was the right thing to do. But I recognise that this challenges schools to develop alternatives.

In recent years, politicians, whatever their party, have become obsessed with accountability and the need for data to allow more discrimination between students (for selection), teachers (for performance monitoring), schools and local authorities (for funding and control decisions). The driver for this seems to be the belief that higher measured scores on national and international indicator systems will raise the country’s economic competitiveness in a global market. Economic purposes dominate.

However, as educators, our concern should be that our assessment systems should first and foremost serve the learning of our students. Thus curriculum and pedagogy must be the focus. On-going school-based assessments should be referenced to the curriculum – not directly to the national tests. If students have truly learned what is in the school curriculum they should do well in end-of-key-stage tests and examinations. It should not be necessary to drill them – sacrificing learning to just ‘getting a grade’.

Herein lies the case for putting aside numbers (levels, grades and scores) and capturing teachers’ judgements in school-based assessment systems – and developing systems for enhancing and assuring the quality of these judgements, through, for instance, collaborative moderation processes. Such judgements are best communicated qualitatively, in words, describing achievements and providing advice on improvement, with close reference to the content of the curriculum.

Qualitative judgements can engage students, parents and other teachers in dialogue about the substance of what has been learned, what needs to be learned, and how students can be helped. Numbers do not possess this power, nor do generalised scales disguised as ‘performance descriptors’. (At the time of writing, we are awaiting the report of a Commission on Assessment without Levels, which was set up by the DfE in March 2015 after the overwhelmingly negative response to its consultation on draft performance descriptors.)

Of course, parents are anxious to know whether their child is ‘on track’, needs help, or exceeds expectations but this comparative information can be communicated by, at most, a three-category system. For example, the EYFS profile used ‘emerging’, ‘expected’ or ‘exceeding’. In truth, this is as fine a comparative judgement that can reliably be claimed for any individual student at any given time. It may be appropriate to create descriptions of what constitutes ‘expected’ achievement (or what is considered the ‘national’ standard). But if a student has not achieved that standard and is not ready to progress to the next topic/skill/concept, they, their teachers and their parents need to know in what particular aspects they are struggling and how they can be helped to improve. Likewise, if they have exceeded expectations, they need to know in what particular respects and how they can enrich and widen their achievements. Such extra opportunities, should focus on securing and enhancing breadth and depth e.g. through applications of knowledge, rather than racing on to the next curriculum topic.

A three-fold categorisation enables teachers to record and report achievement in any given element of the curriculum in synoptic ways, but it also encourages them to expand, in words, on the help students need if they are struggling, or the extra opportunities required by those who exceed expectations. To create further categories – e.g. ‘mastery’, ‘above national standard’, ‘national standard’, ‘working towards national standard’, ‘below national standard’ (as was suggested for KS2 Writing) – just creates a grading system by any other name, with all its perverse consequences.

Of course, progression is as important as absolute attainment, but judgements about progression do not require a generalised ladder of numbered steps. Progression should be embodied in the curriculum i.e. how content is selected and ordered to reflect not just the logic of the subject but what we know about how the subject matter is learned (which may or may not follow the logic of the subject). We can record how students are progressing in relation to this sequence but we are likely to find that students progress unevenly. We then need to ponder why, and what help they may need i.e. to reassert the fundamental importance of formative assessment.

Understandably, school leaders have been concerned about how Ofsted will inspect schools after the removal of levels. In July 2014, the Chief Inspector wrote a letters on the matter to headteachers and inspectors[2]. Nothing was said about numbers or scores; indeed, qualitative forms of assessment, recording and reporting, could meet all his points. The important thing was that schools should have thought-through, coherent systems based on clear aims that could be communicated and justified to inspectors and parents.

I am aware how difficult it will be to convince some colleagues, some parents and some students about any move away from levels and grades, especially in a world where increasing amounts of numerical data are used on a daily basis. It will be a considerable task to convince some people that familiar ways of grading students’ regular schoolwork are not fit for purpose and need to be changed. We will need to accept responsibility and take active steps to educate, not only our students, but also their parents, because we are asking for nothing less than a change in mind-set. Fortunately, there are good examples of schools doing this successfully – Dame Alison Peacock’s Wroxham School[3] springs to mind – and there will be more. 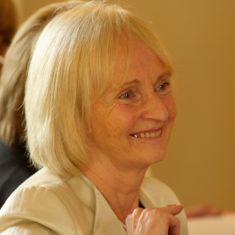 Professor Mary James retired in December 2013 from the University of Cambridge Faculty of Education. From 2011 to 2013 she was President of the British Educational Research Association. In 2011 she was a member of the Expert Panel appointed by the Secretary of State to assist the review the National Curriculum in England. She was Deputy Director of the ESRC Teaching and Learning Research Programme from 2002 to 2008, and director of its Learning How to Learn project. From 2000 she has also been an adviser on curriculum and assessment reform to the Hong Kong Education Bureau. She was a member of the Assessment Reform Group from 1992 to 2010 and has published widely on curriculum, pedagogy and assessment. She began her career as a secondary school teacher.