It has become increasingly apparent that being literate is a fundamental skill for citizens of the 21st century, just as it was in previous times, but also that new conceptualisations of what it means to be literate are needed, as the teaching of early literacy is highly contested. While teachers recognise that digital experiences are inherent to becoming literate in the 21st century, they are receiving contradictory messages regarding their validity, since traditional definitions of literacy are based in print literacy contexts.

‘For children from socioeconomically disadvantaged areas, a conceptualisation of literacy based on print literacy with traditional assessments is particularly problematic.’

For children from socioeconomically disadvantaged areas, a conceptualisation of literacy based on print literacy with traditional assessments is particularly problematic. These are the students who tend to perform at lower levels in standardised tests, and are thus deemed to be ‘at risk’. Accordingly, their teachers tend to spend more time on the ‘basics’ in order to have them ‘test ready’, and as such they are often not given opportunities to experience broader, more exploratory approaches to inquiry. Furthermore, these children are often characterised in terms of being in deficit for not meeting benchmarks, and characterised in terms of what they are unable to do.

The data reported in my newly published paper in the British Journal of Educational Technology is part of a larger case study with children between two and 12 years of age that took place over four years. The data reported here pertains to children aged 4–8 in Australia. The children were from socioeconomically disadvantaged schools in one Australian state. The study was concerned with providing empirical evidence about learning ecologies in which teachers design multimodal experiences to support young children to become literate in the 21st century.

Using a participant observation methodology, both the pedagogical strategies and learning experiences of young children were documented in the form of narratives of early childhood practices. The aim was to consider the potential for new learning (Kalantzis & Cope, 2012) with new technologies, and to support teachers to use tablets to transform their pedagogies and practices in the early years. The approach taken was to use the theoretical constructs of new learning and a pedagogy of multiliteracies (New London Group, 1996) as the focus for designing the new learning ecologies. In this way we moved away from an emphasis on digital childhoods to create contexts for multimodal learning in 21st century childhoods. Consequently, the documented learning stories have multimodality as a uniting element, and digital technologies are viewed as being complimentary to other resources rather than being alternatives to, or in competition with, traditional modalities.

The paper illustrates the ways in which these multimodal learning ecologies can work to support emergent literacy, which is viewed as a foundational skill needed by all children in order to thrive in their learning. It contains specific examples of multimodal experiences that can support children to become multiliterate in a variety of contexts. Multimodal portraits (see figures 1a and 1b) was one among the range of activities pursued, in which children created and discussed various formats for portraits.

Figures 1a and 1b: Multimodal portraits 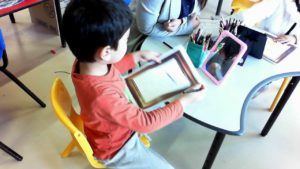 This blog post is based on the article, ‘Humanoid Robots Supporting Children’s Learning in an Early Childhood Setting’, by Nicola J Yelland, which is published in the British Journal of Educational Technology. It is free-to-view for a time-limited period, courtesy of the journal’s publisher, Wiley.

Nicola Yelland is the professor of early childhood studies in the College of Education, Psychology and Social Work at Flinders University in Adelaide, South Australia. Her teaching and research interests have been related to the use of new technologies in school and community contexts. She has also worked in East Asia and examined the culture and curriculum of early childhood settings. Nicola’s work engages with educational issues with regard to varying social, economic and political conditions, and thus requires multidisciplinary perspectives. She is the editor, with Dana Franz-Bentley, of the collection Found in translation: Connecting Reconceptualist Thinking with Early Childhood Education Practices (Routledge, 2017).