In 1998, Japan’s curriculum authorities published curriculum guidelines (gakushu shido yoryo) for national compulsory education, dubbed as the ‘yutori (latitude) curriculum’ with a pinch of stigma. The yutori curriculum promoted activities focusing on the individual relevance of each child along with alleviating excessive pressure in learning. In light of this reformist, progressive message, while the curriculum authorities reduced the curriculum content of the traditional subjects by 30%, a new subject called Integrated Study (sogoteki na gakushu no jikan) was introduced with great fanfare to promote project-based learning beyond prescribed subject boundaries. The main objective of Integrated Study was to promote each child’s proactivity and creativity upon finding and solving problems, and experiential, community-based learning (e.g., wildlife watching, volunteer activities) was encouraged (Ministry of Education, 1998). As anticipated, Integrated Study was unpopular especially among the conservative criticising lower achievement and calling for more rigour. Interestingly enough, Integrated Study was retained in the following 2008 of the curriculum guidelines, which were largely more traditionalist than the yutori curriculum.

Comparing project-based learning in three historical periods after the WWII including Integrated Study using Eisner’s (1985) curriculum orientations as its analytical framework, my recent article (Nomura, 2017) offers a history of postwar Japanese school curriculum primarily based on a (Foucauldian) genealogical interpretation of the national curriculum guidelines on project-based learning, which is actually emblematic of the extending power of postwar Japan’s curriculum authorities (i.e., Ministry of Education; MEXT after 2001). The finding of this article suggests that the yutori curriculum contrasted with the curriculum guidelines in earlier eras, in which project-based learning had basically been left to the discretion of each classroom teacher. Although Integrated Study was rhetorically child-centered and laid emphasis on each school’s autonomy and creativity, my research demonstrates that Integrated Study in the yutori curriculum was rather part of a nationwide, meticulous technology that disciplined schools, teachers, and learners to craft morally good, cognitively flexible, and globally competitive Japanese nationals. The introduction of Integrated Study to the yutori curriculum was ultimately part of the Japanese nation-state’s move to gain further power/control over schooling fuelled by the neo-liberal ideology that ‘individuals, institutions, and states must be “lean”, “fit”, and flexible and indeed agile’ (Ball, 2013, p. 130; also see Motani, 2005).

To supplement an update, the most recent version of the curriculum guidelines was released in March 2017. In this newest version, Integrated Study is more meticulously defined than was in the previous 2008 version, retaining its emphasis on school-based autonomy and personal relevance (MEXT, 2017). For instance, Integrative Study in the 2017 curriculum guidelines is closely tied up with skills ‘fundamental to all learning’ such as use of language, logical thinking, and IT literacy, and the expression ‘solving problems’ in the 2008 version was largely (but not completely) replaced by more modest words such as ‘exploring problems.’ It is also noteworthy that the 2017 version attaches greater importance to moral education and treats it as a full-fledged subject (similar to maths or science) for the first time in the history of postwar Japan. For future research, it would be fruitful to explore whether and how the curriculum authorities alter or possibly downplay project-based learning and other ‘reformist’ aspects of Japan’s national curriculum.

Motani, Y. (2005). Hopes and challenges for progressive educators in Japan: Assessment of the ‘progressive turn’ in the 2002 educational reform. Comparative Education, 41, 309-327. 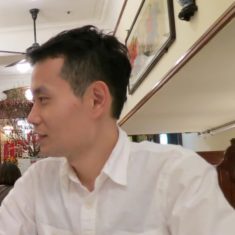 Dr Kazuyuki Nomura teaches Japanese language and culture for the Department of Japanese Studies at the Chinese University of Hong Kong. Kazuyuki is an ethnographer, and his interests are around socioculturally contextualising learning, teaching, curriculum, and education in general. Kazuyuki’s current project is about learners of Japanese in Hong Kong, Taiwan, and Greater China with particular focus on their socialisation to Japanese culture such as ethics and morality.