The announcement last month that AQA was to withdraw the final History of Art A level specification brought a critical response in the press and on social media, not simply because it represented the loss of another highly valued subject from the A level agenda, but because it seemed to represent another assault on the creative subjects in our curriculum. Creativity aside, History of Art, like Anthropology, which suffered a similar fate twelve months go, and Archaeology which seems set to follow it into the A level sunset, doesn’t exactly fit the ‘soft’ or ‘new’ subject descriptions so often ventured when some other subjects bite the dust.

As a one-time Chair of the Association for the Teaching of the Social Sciences and somebody who cut their teeth as a teacher of Sociology in Hertfordshire and Haringey, and as a national figure in Citizenship Education for the last fifteen years, I know what that description feels like at the sharp end; at least it’s an ‘ology uttered Maureen Lipman in the classic 1980s BT advertisement, and to be truthful that faint praise still damns us. Or as an experienced (and rightly lauded) head put it to me in a seminar just as Citizenship was about to join the National Curriculum, “you can’t teach Citizenship in 45 minute lessons Tony, you’ll bore the kids to death”; my response “well, that’s never stopped us with history, mathematics, geography, English…” drew the sting and illustrated just how strong the hierarchy of knowledge is in our education system, and just how corrosive it can be.

This is the same hierarchy that sees an English Baccalaureate devoid of the artistic and creative dimension, that scoffs at the social sciences as ‘soft’, and that halts ‘new’ subjects (such as Citizenship, which has now also departed the A level menu) by posing hostile questions to them that, though legitimate, should be asked of the whole curriculum and of all subjects, new and old. It is the same hierarchy that elevates academic education above professional and vocational education to the extent that the latter is a curriculum not chosen, but fallen onto. As I have remarked elsewhere, we will never grow the generation of engineers that our labour market demands, if we keep throwing the naughty boys a car engine (Breslin, 2015; Breslin, 2016a). And the same hierarchy is at play when policymakers separate ‘worthwhile’ learning (that tied tightly to current employment prospects) and ‘un-worthwhile’ learning (that which may be a tad more frivolous but which has a much better chance of getting reluctant learners back into the classroom), and funds adult education accordingly.

Of course, History of Art has never been tainted with the spurious vocational charge – although I suspect the professionals who run our wonderful galleries and museums would be lost without a rich knowledge of it. History of Art has fallen victim, one might say to other weaknesses – that there are insufficient student numbers and, tellingly, insufficient examiners to assess it. In an era when we are finally getting to grips with the downside of zero-hours contracts, lo and behold, awarding bodies are struggling to recruit teachers, exhausted by a day at the chalkface, to mark into the small hours for a pittance. And, of course, if we marginalize subjects in the curriculum – we’re back to the exclusion of the arts from the E-Bacc – we end up finding it even harder to find examiners from a decreasing teaching pool, not to mention A level candidates.

we have allowed a pincer movement to emerge between, on the one hand, an ever-more conservative curriculum and assessment framework and, on the other, a combination of risk-averse awarding bodies

The message? If Michael Gove’s subject police (for we are still in the slipstream of Gove’s reforms to GCSE and A level) don’t get you, then our market-based examination system, driven by an oligopoly of three major boards, each sitting on reserves built on examination fees paid for from state school budgets and powered by it’s own casualised labour force, surely will. In short, we have allowed a pincer movement to emerge between, on the one hand, an ever-more conservative curriculum and assessment framework and, on the other, a combination of risk-averse awarding bodies that are institutionally driven to put their own viability first and schools fearful of inspection and league table status. The result is that, too often, innovation and creativity are driven from our system, and, more importantly, from our thinking. We are losing, in Matthew Taylor’s favoured phrase, the “Power to Create” (RSA, 2014).

We’ve lost something in all of this – the need to be clear about why we ‘do’ education, what the purpose of our endeavour is. In the week of the 40th anniversary of James Callaghan’s seminal Ruskin speech (Callaghan, 1976), we need to have the great debate that commentators took his intervention as calling for – a great debate that never was – and we need to think about the place of creativity and the arts, the social sciences, and professional and vocational education in the educational lexicon.  Moreover, as I argue in A Place for Learning, (Breslin, 2016b), we need an education system that isn’t just driven by the needs of careers not yet invented but one that places learning at the heart of citizenship, civic identity and community life.

Yes, we need an education system that gets us ready for the workplace, whatever it might look like in the future, but we also need an education that prepares us to engage as citizens, and as community and family members – as effective and confident beyond the workplace as we are within it. Subjects like Anthropology, Archeology, Citizenship and the History of Art have their part to play in that, not that the policymakers in Sanctuary Buildings or the bean counters at our ‘too big to fail’ awarding bodies are likely to notice.

Breslin, T. (2016b) A Place for Learning: putting learning at the heart of citizenship, civic identity and community life, Royal Society for the Arts, Manufactures and Commerce, London 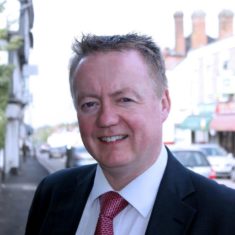 Dr. Tony Breslin is Director of the consultancy Breslin Public Policy Limited and Chair of the awarding body Industry Qualifications. He is currently leading a study on school governance, Governance in the Academies Age, for the RSA, and building support for a National Centre for the Study of the Social Curriculum. In October 2016 the RSA published his paper on the future of learning, A Place for Learning: putting learning at the heart of citizenship, civic identity and community life. Tony is a member of the Academy Improvement Team at Oasis Community Learning, a Visiting Fellow in the School of Education at the University of Hertfordshire, and a member of the Centre for Research on Education and Social Justice at the University of York. He has served as a Chief Examiner at GCSE and a Chair of Examiners at A level. A Trustee of Adoption UK and Chair of the Board of Governors at Bushey Primary Education Federation, he was, until August 2010, CEO at the Citizenship Foundation and, prior to this, General Adviser (14-19 Education) in Enfield, North London.

Time for educational researchers to take their place in the sun?