This raises a question about the level of participation of such stakeholders in the quality assurance of schools. There are both external and internal processes in operation. Externally, auditors and inspectors are officially appointed nationally or by regional education authorities. Internally, schools involve stakeholders variously (MacBeath, 2006). However, one seemingly underused stakeholder perspective is pupil voice and yet Crane reminds us:

‘Schools cannot learn how to become better places for learning without asking the students.’(Crane, 2001:54).

What is pupil voice?

Pupil voice refers to pupils’ participation, contribution and influence in a school context (MacBeath, 2006). Various studies have confirmed the benefits of pupil voice: increased pupil engagement, improved relationship between pupils and teachers, better communication between pupils and the school, and providing the right conditions for the school community to become a learning community (Mitra, 2001; Rudduck et al., 2003). Czerniawski and Kidd (2011, p. xxxvii) describe how some advocates of pupil voice conceptualise it as being irrespective of government agendas, global market forces and neoliberal agendas. While Fletcher (2012) reminds us that pupil voice should not be idolised, pupil voice could nevertheless be a powerful voice to depict the reality in schools and to forge the way forward.

For schools interested in how to introduce, organise and manage pupil voice, the website Pupil Voice Wales, provides excellent advice and examples.

‘Pupil voice’ is an umbrella term. In practice, there is a wide spectrum of potential pupil involvement in school processes, ranked in terms of agency and influence, in Hart’s ladder of participation (1992, p. 8). 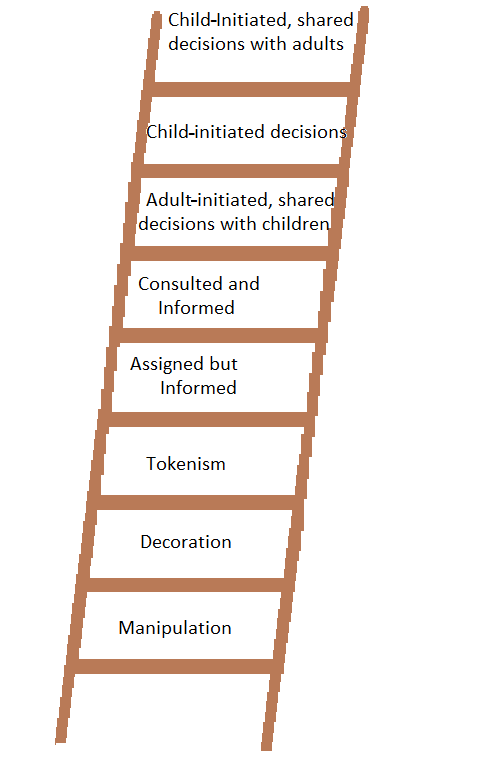 Pupil voice in quality assurance could sit on any one of the eight rungs of this ‘ladder’. For example, schools could wilfully choose to distort pupil voice to satisfy the needs of their quality assurance exercise; schools could choose to give pupils a token voice, or they could invite pupils as mere spectators in the process. Pupil voice could be a selected voice, merely replicating the status quo in a school (Holdsworth, 2015). On the other hand, schools could invite pupils to offer what has been termed a ‘protagonist’ voice, not only to inform the school, but to consult with them, as part of decision-making in the quality assurance process. In the upper rungs of the ladder, pupils could be given the role of assessors. Pupils are the primary beneficiaries and potential victims of the educational system, and so, provide a unique perspective which cannot be captured by other stakeholders. Arguably, they have a right to such a voice (Article 12 of the United Nations Convention on the Rights of the Child, 1989).

Inviting pupil voice to play a leading role in quality assurance of schools offers an opportunity and a challenge for schools. It provides a route towards school improvement, which is, after all, the ultimate purpose of quality assurance.

This is an agenda I have taken up in my doctoral research, which explores the potential of pupils to be assessors in quality assurance of Maltese schools. The main purpose of my research has been to reveal the quality indicators of a ‘good’ school from the pupils’ perspective. I wanted to take practical and positive steps to conflate two agendas in Malta: firstly the pressure on Malta’s educational system for accountability after high investment and, secondly, the rhetoric of national Maltese policies to favour the inclusion of children’s voice (Ministry of Education, Employment and the Family, Draft National Children’s Policy, 2011). I have used pupil focus groups to help design a survey, recently completed by 1,618 primary and secondary children aged between eight and 15, across state schools in Malta, and am now conducting interviews with pupils and heads of schools to discuss the way forward, having revealed the indicators of quality as reported by these pupils.

I would like to thank my tutor, Dr Alison Fox, for her constant support and encouragement. Her expert advice is the guiding force throughout my doctoral research.

United Nations General Assembly (1989). Convention on the rights of the child. http://www.un.org/documents/ga/res/44/a44r025.htm

Angele Pulis is a fourth year, part-time PhD student at the University of Leicester. Her research theme is ‘Pupils as assessors in quality assurance of schools in Malta’.  She is a deputy head in a sixth form in Malta.  In the past she has taught Chemistry, Biology and Integrated Science at different levels, ranging from secondary to post-secondary.  Her main interests are pupil voice, school evaluation, green initiatives in schools, school development planning, teacher mentoring and teacher appraisal.