I’m currently reviewing some guidance as to how to make lecturing notes/teaching materials as accessible as possible. It is, of course, important to be as accessible to all as possible, but I am troubled by something that I have come across here and before, which is the recommendation (or maybe even requirement) to avoid metaphorical language.

In principle I can understand this. If during a tutorial to hear ideas from a student I open with “Hit me” I don’t want to be literally hit, I want to be wowed by ideas. And I have dealt with enough students to know that this is not necessarily clear to all of them. Consequently this is language I do try to avoid. However, I also find metaphors and analogies incredibly useful when explaining things and I am worried about whether this is something likely to be included in this ‘ban’. I predominantly teach art, media and design students how to write (very basic) academic essays and I needed to find a way to engage them in this practice that seem to be inherently abstract to most of them. My solution has been to develop a number of visual analogies to make academic practice that is so often hidden in abstraction visible to them.

Metaphors have been described as “the most primitive, most elusive, and yet amazingly informative objects of analysis.” (Sfard, 1998: 4) But they are not just an analytical tool, but rather also provide an avenue to synthesis. Feinstein (1982), for example, makes the point that “Making sense of experience and its products comes about as we interact with our environment in our attempts to comprehend, construct, and convey literal and metaphoric meaning. The core of those attempts is the fundamental act of symbolic transformation.” (45)

metaphor urges us to look beyond the literal, to generate associations and to tap new, different or deeper levels of meaning. The metaphoric process reorganizes and vivifies; it synthesizes often disparate meanings. In this process, attributes of one entity are transferred to another by comparison, by substitution, or as a consequence of interaction. (Feinstein, 1982: 45)

So if I want students to think about whether a secondary source is appropriate to use at degree level, I ask them to think about these sources as sea creatures living in an academic ocean that is full of such sources who live at different levels. Some live in the shallows – and these they should not use – , some live in the depths – these are much better to use. This reorganises their approach to sources, which is very often just based on content (so easy to come by through a quick search on a search engine), and encourages them to think about the types of sources as well. 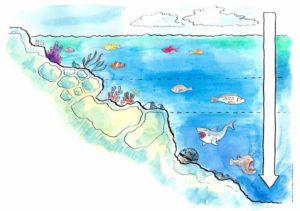 From student feedback on my teaching over the last couple of years I know two things: some students don’t make the link between the analogy and the academic practice (“Why do you keep talking about fish?”); but also that some students not just understand this, but find it incredibly useful, singling out these sessions as the most useful aspects of the module. If I had to put numbers on it, I would say that 75% find this way of learning helpful, while 10% absolutely hate it. So, cutting it from my teaching in favour of a ban on metaphors would actually make this subject harder for a significant portion of students! Some of them are baffled by plain English, straight forward explanations of academic conventions, such as the necessity to embed a quotation, but are quite happy to think of a quote as a button that needs to be properly fastened to a garment. Wouldn’t the cutting of metaphoric explanations and visuals disadvantage these students?

I’m not arguing for having either/or, but I believe that a combination is reasonable – in the spirit of explaining important things repeatedly and in as many different ways as possible, but it means I will not necessarily be getting rid of metaphorical language. What is the balance we should strike in our teaching so that we don’t lose the potential of metaphor in learning?

Alke Gröppel-Wegener is Associate Professor of Creative Academic Practice based in the Faculty of Arts and Creative Technologies at Staffordshire University, UK. Her main teaching responsibilities include teaching study skills to creative practice students and contributing contextual studies to the animation courses. She also leads the Master by Negotiated Study.

Having explored the role of writing in undergraduate design education for her doctoral research, Alke builds on this knowledge to provide students with the academic dimensions to their practice-based courses. Her strategies to achieve this include experiential as well as electronically enhanced learning to give students the opportunity to explore transferable skills such as research, writing and technology stewardship, in the context of their practice. She blogs at www.tactileacademia.com and has written and designed Writing Essays by Pictures, a workbook for students to be released in September 2016.

In 2015 she was awarded a National Teaching Fellowship by the Higher Education Academy.