There is an impending crisis in the numbers of teachers in schools. This is message that I have heard time and again at the various conferences I have attended in recent weeks looking at the future of teacher education, from the centre-right think-tank Policy Exchange to the Universities Council for the Education of Teachers (UCET).

It was suggested that teacher supply will be one of the defining educational issues in this Parliament. There are two key elements to this problem, firstly the inability to recruit enough teachers and secondly the rate at which teachers are leaving the profession.

I don’t have space in this piece to consider in detail the issues surrounding teacher retention, but it is worth noting what Michael Wilshaw described as the “scandal” of 40% of teachers leaving within their first five years of teaching. Decreasing numbers entering teaching makes tackling the issue of teachers staying in the profession even more important and this is likely to need to focus on induction, mentoring, leadership support and CPD.

It is also worth mentioning the issue of regional differences, with pupil numbers rising faster in particular parts of the country, such as London and the South-East. The majority of teachers train within 20 miles of where they go on to teach and so there are particular regional dynamics that need to be factored in when considering the numbers of teachers that we need to train.

The number of routes into teaching has expanded in recent years providing different options with Teach First, School Direct (salaried and non-salaried), SCITTs, Troops to Teach as well as the more traditional BEd and PGCE routes. However, despite the increasing routes in to teaching the headline remains that whereas there were 37,800 students recruited into teacher education 2010/11 this had dropped to 32,543 by 2014/15.

Teaching is always a popular option for graduates, but has recently fallen out of the top three graduate employment choice for the first time in years, perhaps reflecting the wider historical trend that recruitment to teaching is often counter-cyclical with the fortunes of the economy.

This is likely to be linked to both growing numbers of graduate jobs and also increasing salaries, with the chart below giving an indication of the differential median salaries for different industries. Also, whereas median public sector salaries are decreasing they are beginning to increase in the private sector. It is important that more work is done to support the perception of teaching being a highly valued profession rather than just an alternative in economically challenging times.

However, whilst the overall drop in the numbers of people entering is worrying enough in itself, not least given the increase in UK population, this is exacerbated by differences across different subjects being taught. 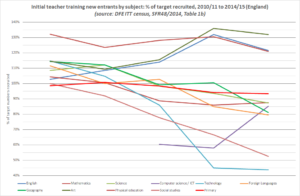 The chart above shows the recruitment of teachers over the last four years by the different subjects they would teach at secondary. It shows the real differences in recruitment across subjects. For ease of reading the chart we haven’t included all subjects, but the chart shows the actual numbers recruited against the targets set by DfE on an annual basis.

Whereas when the chart starts in 2010/11 all subjects are either recruiting above their targets, or very close to them, this has changed significantly in the four years since. Now most subjects are not reaching their target recruitment figures, despite the annual targets decreasing year on year, and for some subjects significantly so.

The chart shows science going from slightly over-recruiting at 109% of its target in 2010/11 dropping to only reaching 87% of its target by 2014/15 and maths similarly going from 104% to 88%. However, it also emphasises the differences across subjects, with some subjects like PE remaining popular hovering between 120-130% of its targets over the four years, whilst English goes from almost hitting its target at 103% increasing to 122%.

Teacher education is subject to various central Government controls on the numbers that they recruit, and these are restricted by the different routes into teaching. It is perhaps worth asking why we are trying to predict these student places centrally? One of the main restrictions on these student numbers studying teaching are the additional costs to Government to fund each student but it might be worth looking at creating a new system based on freeing up the market and letting demand decide.

Government policy in higher education more generally in recent years has been to loosen restrictions on student choice, removing the cap on student numbers and increasing competition in the system and perhaps there are more opportunities for this within the teacher education sector. At a time of likely teacher shortages we shouldn’t be placing restrictions on number of people who can study teaching or indeed through particular routes into teaching.

Deputy Chief Executive at Guild HE

Alex Bols is Deputy Chief Executive of Guild HE – one of the recognised representative bodies in UK higher education. Prior to which he was Executive Director of the 1994 Group of research-intensive universities. He is Chair of Governors at Vittoria Primary School, on the Board of Directors at the British School of Osteopathy and a trustee of Cambridge University Students’ Union and currently doing his Doctor of Education at UCL’s Institute of Education. Previously he was Head of Higher Education and Assistant Director (Research) at NUS; Secretary General of the European Students’ Union and he has also worked at the Institute of Education and Universities UK.