Traditionally adults do not consider students as a source of valuable insight about school problems and students are not seen as mature enough to be real partners in change initiatives. Adults’ negative perceptions that students are incapable of informing and leading school change drive students’ exclusion from having authentic decision-making roles in school. With this mindset adults position students on the fringe of school change processes rather than making them central partners. Such an approach impedes school leaders’ ability to obtain necessary perspectives about school challenges and ultimately design effective change strategies.

In 2011-15 Neutral Zone, a teen centre located in Ann Arbor Michigan, worked with 19 low performing high schools across the state to adapt its “youth driven spaces” (YDS) model to support student voice in their school settings. This work complimented the Michigan Department of Education (MDE) Safe and Supportive Schools (S3) initiative, a federally funded school reform effort targeted at the lowest performing high schools in state. The goal of S3 was to raise levels of achievement by implementing interventions to increase levels of school safety and student support. It was believed that creating a positive school climate would improve student attendance, learning, achievement, retention and even graduation.

Student voice was required to be a part of each school’s effort, no matter which of the school reform models they adopted

Each school within the S3 project implemented one or more school intervention models choosing from Restorative Practice, Bully Free Schools, Creating Safe Choices for Sexual Minority Youth, Michigan Model for Health, or Parent Engagement. The goal through any of these models was to address the conditions for learning and improve the culture and climate in their building. Student voice was required to be a part of each school’s effort, no matter which of the school reform models they adopted. In order to support the student voice objective, most of the schools (19 out of 22) also chose to work with Neutral Zone, for 1-3 years, to help develop and build capacity for their student engagement in school reform.

Using Zeldin’s (2012) youth-adult partnership framework as the theoretical basis for the intervention, which focuses on supporting positive youth development through authentic civic engagement (Christens and Peterson 2012; Flanagan and Faison 2001; Sullivan and Larson 2010), students from 19 of the S3 high schools in Michigan created student teams or “advisories” which engaged in projects to support school reform. The objectives were to have each team research school issues related to their school reform efforts, plan and implement a project that addressed one of the issues and to create an Advisory or Action Team that could support on-going student involvement.

The S3 project was an unqualified success.   All of the schools in the cohort were identified as “Priority Schools” meaning that they were in the bottom 5% lowest performers on state benchmarks.   By the conclusion of the project 70% of the S3 schools moved off the Michigan “Priority List” as opposed to 37% of non-S3 Priority schools.

Additionally, 65% of the schools across the S3 cohort had significant improvements in school safety, as measured by scores on the Michigan Coordinated School Health and Safety Report (MiPS3). Among this group, graduation rates increased 18% (over 3 years).

While the evaluation wasn’t designed to isolate the effects of a single intervention, there was wide agreement that “student voice and engagement” was one of the key program areas important to the project’s success.

Some items where students made significant gains included: feeling connected to their student advisory group; feeling connected to adults in their advisory; and feeling that it was important to be involved in the advisory. They also had significant increases across the following items: using creativity to solve problems, better at taking feedback, running a meeting, and organizing an event or project for school.

There are many ways to empower and amplify students’ voices and engagement. School climate is a good place to start, as students have the most to gain when school climates are safe and supportive, and the most to lose when they are not. Students make up the majority of a school’s population, and can easily be the body that influences the climate.

Additionally, because there are few state or locally mandated laws or policies that define school climate thereby providing the greatest latitude for student voice, buy-in and leadership. Finally, climate, different from curriculum, has no learning benchmarks or standards requirements, and thus teachers do not need to feel that their power as content experts is being usurped when youth take the lead. 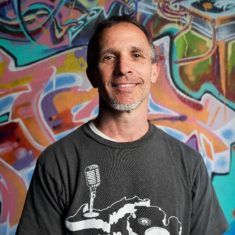 John Weiss has worked with diverse populations of youth, youth programs and schools for nearly 30 years. John served as the Executive Director of the Neutral Zone (NZ), Ann Arbor’s Teen Center for 9 years.  He currently serves as its Director of Strategic Initiatives leading the organization’s training and coaching work with after-school and school-based programs.

John’s commitment to youth voice has helped NZ become recognized as one of the premiere teen spaces for older youth in the country. John served as a teacher in the Ypsilanti Schools and as the Middle School Reform Facilitator for Willow Run Schools, both in Michigan. John served for 7 years as the Director of the Adolescent Division of the High/Scope Educational Research Foundation. He also worked as a teacher in the Peace Corps in W. Africa.