All young children tend to misbehave from time to time, which makes it necessary for parents/guardians to step in with disciplinary measures. Although the need for child discipline is broadly recognised, there is considerable debate regarding violent physical and psychological disciplinary practices (UNICEF, 2010). This is because of concerns about the effects of these practices on children’s physical, cognitive, behavioral and mental health outcomes, and links to physical maltreatment in some families. According to Smith, Gollop, Taylor, and Marshall (2005), two-thirds of physically abusive incidents arise out of parental disciplinary actions.

In some African societies like Nigeria, parental use of physical methods to discipline children is widespread. The traditional childrearing method seems to support the idea of ‘not sparing the rod on the child’, which tends to encourage the beating of children, with most parents using harsh punitive measures to discipline their children without realising the harms they cause. Children are therefore raised under the culture of violence. A UNICEF study (2014) conducted in Nigeria found that, on average, about four in five children aged 2–14 (about 91 per cent of children surveyed) had experienced violent discipline at home in the month prior to the survey. Through the process of social learning, children raised in homes where the use of physical punishment is very rampant see physical punishment as the norm, which they themselves transmit to their own children – thus resulting into a vicious cycle (Snyder & Bub, 2008).

The phenomenon of physical punishment against children has attracted global attention. The United Nations Committee on the Rights of the Child issued a directive in 2006 calling physical punishment ‘legalized violence against children’ that should be eliminated in all settings. It has been described as a major threat to global development. The World Health Organization states that the future of human societies depends on children being able to achieve their optimal physical growth and psychological development (Bloomfield & Kendall, 2008). Hence, exposing children to violent discipline seriously limits their possibility of achieving optimal development.

‘We are concerned about the need to help parents/guardians reduce the use of physical punishment and break the vicious cycle of intergenerational transmission of violent parenting practices, in order to optimise children’s development.’

We as educational researchers are concerned about the need to help parents/guardians reduce the use of physical punishment and break the vicious cycle of intergenerational transmission of violent parenting practices, with the goal of optimising children’s development. Noting that education remains a powerful force that has potential to bring about a change in the life of individuals and society, we developed and implemented an eight-week parenting education programme (PEP) designed to improve parenting practices and help parents/guardians develop appropriate child management techniques. The programme’s effectiveness was evaluated by assessing the changes in parenting behaviour brought about as a result of parental participation in it (Ofoha, Ogidan & Saidu, 2008). The findings of the research revealed that the PEP programme significantly reduced the frequency with which parents/guardians used physical punishment on children, with many parents having a greater awareness of its harmful consequences and adopting more positive methods of behaviour management in dealing with their children.

Given the positive outcomes of our study, the PEP programme can be seen as providing a useful resource for supporting parents/guardians in creating a safe and supportive home environment that prevent children’s exposure to physical abuse and adversities, and thus contributing to healthy relationships with and the development of their children. Hence, the evidence described in the study can be used to inform policy and practice on the need to embrace parenting education, in the context of a traditional society like Nigeria, in a formal national programme that promotes good parenting practices. Policymakers in the education sector can be sensitised to introducing parenting education into the school curriculum of primary and secondary education, so that boys and girls who are aspiring to become future parents will begin to imbibe appropriate child management skills sufficiently early, and through this process help to break the intergenerational cycle of punitive violence and ultimately help to improve positive parenting skills.

This blog post is based on the article, ‘Child discipline and violence in Nigeria: A community‐based intervention programme to reduce violent discipline and other forms of negative parenting practices’, by Dorothy Ofoha, Rotimi Ogidan and Rosemary Saidu, which is published in the Review of Education. It is free-to-view for a time-limited period, courtesy of the journal’s publisher, Wiley.

The content of this blog draws on research work that was supported with grant from the TETFund Research Fund, a federal tertiary education trust fund in Nigeria. 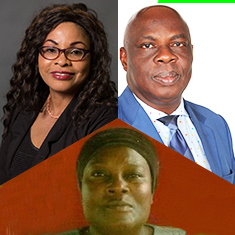 Dr Dorothy Ofoha is a senior lecturer in the Faculty of Education, National Open University of Nigeria. She holds a PhD in educational psychology from the University of Lagos, Nigeria. She has been involved in many collaborative initiatives and implemented major research projects supported with grants, and has presented papers at national and international conferences, with a number of scholarly publications to her credit. She belongs to several professional associations including the Nigerian Society for Educational Psychologists (NISEP), Educational Research Network for West and Central Africa (ERNWACA), African Council for Distance Education (ACDE), and the American Psychological Association (APA). Her current research interests are mainly on the areas of classroom behaviour management and control, child discipline and parenting, behavioural interventions to reduce child corporal punishment, and learning motivation. Dorothy is self-driven, result-oriented, highly methodical, and works with passion for excellence.

Professor Joshua Rotimi Ogidan is a foundation staff of the National Open University of Nigeria. He studied guidance and counselling in the University of Ilorin, Nigeria for his B.Ed, M.Ed and PhD degree programmes in 1987, 1989 and 1999 respectively. At the PhD degree level, he carried out his final research on ‘A cross ethnic study of the attitude, adjustment needs and support systems of retired Nigerian Federal Civil Servants’. Thereafter, he worked on several research areas in counselling, psychology, teacher education and ODL. He has several publications in both national and international accredited journals. He is a professor in guidance and counselling in the Faculty of Education, National Open University of Nigeria. He is also serving on secondment as the executive director of the African Council for Distance Education (ACDE) in Nairobi, Kenya.

Dr. Rosemary Fehitioluwa Saidu gained a PhD in guidance and counselling from the University of Ilorin, Nigeria in 2008, and joined the National Open University of Nigeria (NOUN) the same year. She has published both locally and internationally, and has written a book on marriage and on NOUN study material in her field of study. She has presented papers at national and international conferences, and is a member of the American Psychological Association (APA) and Counselling Association of Nigeria (CASSON).