My PhD dissertation seeks to examine the extent and the means by which the mainland government has been endeavouring to (re)construct a Hong Kong identity with a sustained emphasis on ‘Chineseness’ since the handover of power in 1997. In this process, the role played by education has been central and I therefore selected for critical analysis a range of key curriculum documents and public speeches made by government officials in post-colonial Hong Kong. The findings of the research have resonances extending beyond Hong Kong and carry a number of implications for U.K. education policies, particularly in relation to the arbitrariness of socially constructed national identities.

In the late 1980s and 1990s prior to withdrawing from Hong Kong, the British colonial government introduced the teaching and learning of democracy and local identity, which had previously been downplayed due to political considerations deriving from Hong Kong’s colonial legacy. These changes met with some success but were rapidly abandoned by the new government following the handover in 1997. From the speeches made in that year, it was found that the first Chief Executive of Hong Kong actively ‘problematised’ the identity issue, the colonial period being described as one during which Hongkongers had lost their ‘root’. The policy implication was that there was an urgent need to re-establish the ‘Chineseness’ of Hong Kong.

mythicising the capacity of national education to be able to solve a range of social ills, including teenage problems and, preposterously, economic recession

In subsequent months, the government repeatedly pointed out that the former colony was marked by both a lack of knowledge about, and a dearth of correct attitudes towards, a patriotic stance towards ‘motherland’ mainland China. Such a discourse soon claimed dominance (described as a ‘consensus’) in educational policy-making. Officials became elaborately keen on promoting projects on correcting the so-called problems. The study sought to identify the more prominent of the resultant policy approaches, the first of which was mythicising the capacity of national education to be able to solve a range of social ills, including teenage problems and, preposterously, economic recession in 2007.

The allegedly ‘nationalising’ of national education in post-colonial Hong Kong was found to draw strongly on re-imagining the ethnic-cultural links between Hong Kong and mainland China, given that the two states had been separated for 150 years and had distinctive languages and histories. The (re)constructed identity was then infused with peremptory officially selected Chinese traditions, virtues, deeds and historical narratives. Despite the new government’s assertion that national education did not represent a replacement of civic education in the city-state, the research reveals significant contradictions between the two and highlights new threats to multiculturalism in a self-titled ‘international’ metropolis.

Perhaps the most striking feature of these changes is also the most problematic one, namely the arbitrariness of this drive towards an officially created national identity. After more than a decade of relentless undemocratic activity, the proposal for replacing ‘Moral and Civic Education’ with ‘Moral and National Education’ was the trigger that led to widespread protests and a two-week student-led occupation of government headquarters buildings. In the face of such united opposition, the government had no choice but to ‘permanently shelve’ the proposals; yet worries remain about more subtle but by no means less impactful projects directed towards the political goal of complete unification.

Hong Kong clearly has a peculiar colonial history, and it is one of the few that gained no independence after colonisation; the nationalising process highlighted in the study, however, is by no means an unconventional one. Therefore, the study adopted, and in some respects adapted, theories proposed by Michel Foucault and Benedict Anderson to make sense of the happenings; the former giving explanatory weight to the linkages between discourse, power and knowledge, and the latter on nationalism as a complex form of imagined community.

necessarily turns towards theoretical work on nationality, ethnicity, citizenship, globalisation and multiculturalism in seeking to understand the contemporary processes of national identity construction

Particularly in the current international climate, the study carries a timely reminder to education policy-makers and educators of the risks in promoting ethnic-cultural nationalism. An inchoate idea of ‘Britishness’ was advanced as a response to the London Underground bombings a decade ago and, more recently, to the prospect of a ‘swarm’ of migrants (to use David Cameron’s term) and to substantial Europeanisation. Indeed, much of the existing educational literature on nationality and ethnicity in British schools has expressed grave concerns over the poignant experiences that minority students have to face, and the plight that their teachers find themselves in. To understand the realities of contemporary classroom experiences, the dissertation illustrates that detailed policy and historical research is essential. This not only connects the day-to-day experiences of classroom life with the policy world and the wider socio-political environment but also necessarily turns towards theoretical work on nationality, ethnicity, citizenship, globalisation and multiculturalism in seeking to understand the contemporary processes of national identity construction. 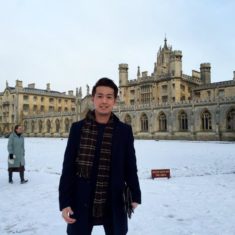 Alvin Leung is a PhD student at the University of Cambridge, fully funded by the Cambridge Trust. His academic interests are the politics and sociology of education, particularly in the realm of citizenship education. His doctoral research is a critical analysis of discourses around nationality, ethnicity and citizenship in contemporary England, attending particularly to the dialectics between the authorities and alternative groups in terms of civic engagement. He read journalism in completing his Bachelor’s Degree in Social Sciences and, after that, a Postgraduate Diploma of Education. He has worked as a TV journalist, a Social Studies teacher and a research assistant.

The subject of this post won the 2015 BERA Masters Dissertation Award.