According to a report prepared for the Higher Education Funding Council for England, online and distance courses have increased significantly in the UK over the past decade; a survey by the UK’s Universities and Colleges Information Systems Association showed that asynchronous discussion is an increasingly used means of fostering student learning in online and distance courses. Grounded in social and cognitive constructivism (Liu and Matthews, 2005), this approach allows, through social interactions in discussions, students to explore and exchange information, and to put forth and build on ideas. Therefore, the relationship between social interactions and knowledge construction is crucial for understanding online and distance learning.

With the purpose of further investigating these relationships, my colleague, Yu‐Hui Chang, and I examined students’ social interaction and cognitive engagement in a graduate-level online course, ‘Online Learning Communities’, offered at a research university in the midwestern United States. There were two types of online discussions in this course: the instructor-designed/facilitated discussion, and the student-designed/facilitated discussion. The instructor and student teams designed discussions and learning activities, provided readings and resources, and proposed prompting questions in discussions to drive student thinking, inquiry, and reflection. The data for this study were content from online discussion posts and comments.

Results indicated that students’ social participatory role was a critical indicator of their cognitive engagement level. Compared to inactive students, socially active students made more contributions to knowledge inquiry and knowledge construction. Furthermore, students had a tendency to keep social-cognitive engagement patterns. This result echoed with an undesired learning phenomenon called a ‘rich club’: active students who built rich peer-connections from the beginning were more likely to build capacities to spread and receive ideas. In contrast, inactive students who failed to build up connections from the beginning would find it difficult to build reciprocity in the interactions, and to make cognitive contributions, later.

However, there were exceptions. While several students were normally ‘peripheral students’ throughout discussions, they also, as designers and facilitators of some discussions, demonstrated leader roles to actively engage in discussions. Therefore, empowering students to take leadership roles could help them break down ‘rich club’ phenomena, build peer connections and enhance cognitive engagement. Instructors can encourage student to engage in top-level planning, decision-making and learning co-ordination.

Results indicated that when students considered themselves as creators of the learning process, they were more prone to execute their learner agency – taking action to lead and participate in learning. Some pedagogical and technological support was proposed to help develop learner agency. First, instructors can invite students to lead learning design, facilitation and collaboration processes in order to increase students’ learning motivation and engagement. Second, learning analytics tools should strive to provide both social and cognitive information, which would help students develop a better self-awareness of their learning processes. Overall, consistent with an investigation by the UK’s Higher Education Academy (Healey et al 2014), our study also suggested that learners, instructors and designers should together build shared, genuine collaborative partnerships during teaching and learning processes in higher education.

Ouyang F and Scharber C (2017) ‘The influences of an experienced instructor’s discussion design and facilitation on an online learning community development: A social network analysis study’, The Internet and Higher Education 35: 34–47.

Tirado R, Hernando A and Aguaded J I (2015) ‘The effect of centralization and cohesion on the social construction of knowledge in discussion forums’, Interactive Learning Environments 23(3): 1–24

Wise A F, Hausknecht S N and Zhao Y (2014) ‘Attending to others’ posts in asynchronous discussions: Learners’ online “listening” and its relationship to speaking’, International Journal of Computer-Supported Collaborative Learning 9(2): 185–209

Fan Ouyang and Yu‐Hui Chang’s original article in the British Journal of Educational Technology (BJET), ‘The relationships between social participatory roles and cognitive engagement levels in online discussions’, can now be read freely online until 31 August on Wiley Online. 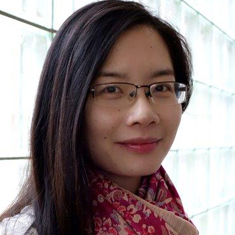 Dr Fan Ouyang recently graduated from the learning technologies program of the Department of Curriculum and Instruction at the University of Minnesota. Her research primarily centres on the intersection between collaborative learning, learning analytics implementation and pedagogy development. The overarching purpose of her research is threefold: (a) to understand how learners learn in different learning contexts, particularly in online and blended learning contexts; (b) to develop instructional design and pedagogical strategies to foster collaborative, self-regulated learning; and (c) to design and conduct learning analytics implementations (such as learning analytics methodology and learning analytical tools) to understand and support teaching and learning. Her long-term goal is to inspire multiple stakeholders – including instructors, learners, researchers and designers – to view learning as a creative, reflective and transformative process, and treat themselves as a community of researchers in order to nurture agency in the teaching, learning, investigation and design processes.

Her personal blog is fanouyang.net.