Independent-living skills training is a core service offered by almost every rehabilitation centre for children with cognitive disabilities. The ulti-mate goal is to help children reach a high degree of self-care and live as autonomously as possible within their own homes and the community. Towards this end, children are, from an early age, systematically trained to perform basic tasks so as to acquire skills in home living, household management, personal care and safety (Wallace, Liberman, Tauber & Wallace, 2000).

Nowadays, independent-living training is increasingly driven by technology. In certain cases, technology-supported approaches have improved the performance and independence of individuals with disabilities more effectively in comparison to more traditional means (Braddock, Rizzolo, Thompson & Bell 2004). Several technological approaches have been used for training or assisting individuals with cognitive disabilities, such as personal robots, virtual technologies, tangible interfaces and smart environments. The majority of these approaches embrace playful learning as a powerful medium to enhance engagement, increase motivation and improve the performance of students.

Considering the impact of technologically enhanced games on the training of children with cognitive disabilities, Korozi et al. have developed ‘Home game’ in collaboration with the Rehabilitation Centre for Children with Disabilities in Heraklion, Crete, Greece. The game was created following an iterative process that aimed to ensure the best possible fulfilment of the educators’ requirements in terms of functionality, content, overall usability experience, and the students’ needs. Such process resulted in the delivery of a safe, cost-effective and eco-friendly (in terms of the materials used) system that augments well-established educational practices and offers extensive analytics to educators to assess their students’ progress and performance in real-time. It is intended to be used under the supervision of the educators and aims to facilitate: familiarisation with the main rooms of a house and the objects in each room, learning of daily routines (brushing teeth, for example), and how to avoid inappropriate and prevent hazardous behaviours.

‘Home game’ is an innovative augmented table-top educational game that combines tangible interaction with a virtual environment, falling under the category of serious games. It employs a touchscreen display and supports physical manipulation with boards and printed cards, while output is communicated through multiple channels (visual, auditory). The system is structured into a set of mini-games (such as ‘Locate the room’ and ‘Find the wrong object’), which can be personalised for each player in terms of content and interaction paradigm, either automatically based on their profile settings or manually by the educators.

Designing technology interventions for children with cogni-tive disabilities is a challenging task, demanding the active participation of domain experts from multiple disciplines, including specialised therapists, psychologists and user experience experts (Antona, Ntoa, Adami & Stephanidis, 2009). The iterative design process that has been followed yielded several valuable lessons with regard to the development of technologies for children with cognitive disabilities.

The final system was deployed in the Rehabilitation Centre and was actively integrated into its curriculum. Semi-structured interviews with educators, after a year of its installation, revealed that students look forward to using the system with enthusiasm, and when using it they are highly engaged. The fact that ‘Home game’ was actually adopted in the students’ training, and was so warmly accepted, constitutes not only a reward but also a motivation to further advance research efforts in designing educational games that can improve the quality of life of people with disabilities.

This blog post is based on the article ‘Designing an augmented tabletop game for children with cognitive disabilities: The “Home game” case’ by Maria Korozi, Asterios Leonidis, Stavroula Ntoa, Dimitrios Arampatzis, Ilia Adami, Margherita Antona and Constantine Stephanidis, which appears in the British Journal of Educational Technology, and is free-to-view online for a limited period courtesy of the publisher, Wiley. 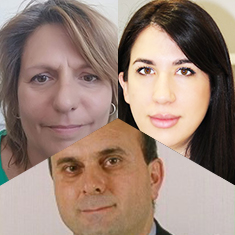 Maria Korozi holds a PhD in ‘Information Systems and Human-Computer Interaction’ from the Computer Science Department of the University of Crete. Her current re-search interests include web accessibility, adaptive and intelligent interfaces, eLearning, design for children and ambi-ent intelligence.

Margherita Antona is principal researcher at ICS‐FORTH and deputy head of the HCI Laboratory of ICS‐FORTH. Her research interests include adaptive and intelligent interfaces, computer‐supported user interface design, design for all and assistive technologies, eLearning and ambient intelli-gence.

Constantine Stephanidis is a professor at the Department of Computer Science of the Universi-ty of Crete, former director of the Institute of Computer Science of the Foundation for Research and Technology – Hellas (ICS‐FORTH), founder and head of its HCI Laboratory, and founder and head of its Ambient Intelligence (AmI) Programme.

Democracy through Pedagogy: the Mantle of the Expert in Initial Teacher Education

Competing, complementary and missing discourses of social justice in early childhood education and care in England