Data comes in many forms, some more accessible than others. At the recent BERA conference, I tried to address this with a poster presenting quantitative data in an unexpected way.

The data came from a study of student motivation in modern foreign languages in English secondary schools. As the subject is optional in many schools beyond the age of 14 and take-up is low, the question of motivation is particularly pertinent. The study is grounded in self-determination theory (Deci & Ryan, 1985; Ryan & Deci, 2017), which provides a practical way to assess school learners’ motivation by considering students’ reasons for engaging with their lessons, rather than language learning itself – this is particularly suitable in a context where ‘languages’ is part of the curriculum; a subject like any other. Using the Self-Regulation Questionnaire – Academic (Ryan & Connell, 1989), students’ motivation can be plotted along a continuum, from amotivation (‘I don’t see the point’), through increasingly internalised types of regulation (‘I do it because it’s what I’m supposed to do’; ‘I do it because it’s important to me’), to intrinsic motivation (‘I do it because it’s fun’).

The study itself fills a research gap by tracking student motivation across all seven secondary school year groups, enabling trends to be identified and thus providing information for practitioners to support their promotion of the subject. A total of 1,797 students aged 11–18 from three schools in one region of the UK took part, and mean scores for each type of motivation were calculated for each year group. The wider study links motivation to choice, perceptions of autonomy and competence, and the learning climate. However, the poster, and this blog post, is as much about the representation of the findings as it is about the findings themselves.

‘Quantitative data can be intimidating and inaccessible, but by taking creative approaches to its presentation, it doesn’t have to be that way.’

Inspired by the Tempestry Project which presents climate data using yarn in order to make the discussion of climate change more accessible, the poster presented the different motivational profiles of students in each year group in the form of crocheted panels. Each type of motivation measured is represented by a single colour and each line of crochet represents a percentage; the finished panels are concrete and ‘real’, providing a more immediate ‘experience’ of the data than more traditional representations allow. The data showed that as students got older and moved into the post-compulsory phase of language learning, the level of intrinsic motivation increased, but this happened alongside an increase in amotivation. External regulation, characterised by the avoidance of sanctions or the desire for rewards, decreased as students got older. These findings are clearly shown in the seven panels when assembled side-by-side.

Figure 1.1
The crocheted panels that illustrate the different motivational profiles of each year group 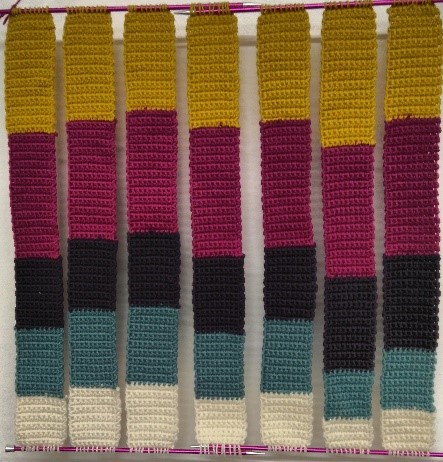 This unusual visualisation of the data is intended to show how ‘hard data’ gathered by researchers can be made accessible to a lay audience and how the presentation of findings, as well as research itself, can be interdisciplinary. The emerging trend for knitted and crocheted data visualisations builds on a tradition linking fabric and yarn to hard data that encompasses, among others, the Jacquard loom of the 19th century, the encoded knitting of Mme Defrage in Dickens’s A tale of two cities, the knitters of the Resistance in the second world war and the Incan system of recording accounts in knotted string. It provides a tactile alternative to the graphic data visualisations popularised by books such as Information is beautiful (McCandless, 2009) and London: The information capital (Cheshire & Uberti, 2016).

Presentation of data in unusual formats is intended to spark conversation and encourage those who would not normally engage with research to consider its importance and implications. At the BERA conference, the poster sparked lots of conversations with other delegates, including one who pronounced it ‘ridiculously awesome’ and another who asked me about its ‘meta’ meaning as a piece of performance art – where had my motivation been on the continuum as I’d worked on the panels?

Quantitative data can be intimidating and inaccessible, but by taking creative approaches to its presentation, it doesn’t have to be that way. I’m currently thinking about how I can represent other elements of the study in fabric or yarn – watch this space! 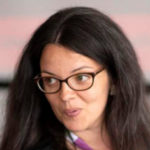 Dr Abigail Parrish is a senior lecturer at Bishop Grosseteste University, Lincoln. She teaches on a range of undergraduate and postgraduate programmes focusing on teacher development and languages education and is a former secondary modern foreign languages teacher. Her main research interests centre around motivation in language learning, using self-determination theory, and school-level language policy. She crochets in her spare time.