Recently critiques of Academisation have focused on themes broadly relating to educational marketisation, (quasi)-privatisation, financialisation and corporatization. To understand these processes in their fullest, it is necessary to frame them as part of Thatcher’s neoliberal reforms in a crucial period of history that began the erosion of State schooling. Ensuring that we remember this history will allow us to more effectively understand it, and subsequently challenge it.

creating the conditions for the reconfiguring education from a common and publically provided good, to one which is increasingly utilised exclusively for self-interest and private profit

There are many aspects of these reforms including attacks on: teacher freedoms, ILEA, critical pedagogy, and I would like to draw attention to two that played key roles for creating the conditions for the reconfiguring education from a common and publically provided good, to one which is increasingly utilised exclusively for self-interest and private profit.

Firstly, Thatcher entertained the notion of private individuals paying for education in 1981 when she introduced full fees for international students. It represented the first glimpse a policy agenda shifting the cost burden of HE to private individuals and away from tax-payers. Research often negates this influence of Thatcher on fees. This is a history that I predict will eventually lead to the lifting of the 9k cap for universities to withstand public expenditure cuts. This could result with some HEI’s charging differential fees for courses offering pick’n’mix modules with costs totaling circa £18k per annum for combinations that will potentially yield the highest salaries – all in the name consumer choice. The stratification across and within HEI’s will be phenomenal in such an event.

Secondly, Thatcher instated irreversible financial de-regulation giving unfettered freedoms to the banks. This has been called the Big Bang of banking regulation. The result was two decades economic growth until Thatcher’s Big Bang went BANG and the British economy went bust in 2008. At which point we were told that there’s no money left to deliver and run State education. It set the near perfect conditions for neoliberalising schools and universities. Put another way, if the economy hadn’t gone bust, it would be more difficult to justify dismantling and quasi-privatizing State education to resuscitate the banks.

What becomes clearer when framing educational reforms in the context of Thatcherism is the prevalence of class war, where the ruling class create the political economic and socio-cultural conditions to entrench further the dominant neoliberal ideology.

Academies are one manifestation of the history of neoliberalism, and a mechanism to sustain it. Academies are an evolution of Thatcher’s policy agenda of localizing the managements of schools and Compulsory Competitive Tendering. It is well known that Academies were a flagship Blairite programme in 2001, however New Labour were not the first to give the private sector a significant role in running and delivering schooling. The City Technology Colleges introduced as part of the Education Reform Act ‘88 allowed the private sector to reach into what had been a public service provided by the State. Testament to the importance of this legacy is Thatcher’s comment that her “proudest achievement” was Tony Blair.

The dismantling of the State education system has been presented as modernisation, a euphemism for businessification or commodification of public services and destruction of welfare. Prime Minister Cameron reiterated his commitment to making all schools Academies at the 2015 Conservative Party Conference stating that “at a time when the Labour Party is giving up on public service reform … I believe it is a moment for a Conservative majority government to be bolder still.” Academies do not represent a “reform”, they are an extension of Thatcher’s neoliberalisation of State provision, and it needs to be understood as such in research and teaching to be able to challenge it.

While being the Secretary of State for Education, Thatcher ended free school milk provision and successive neoliberal governments have continued this legacy of snatching away the State, thus to a point now where we face the prospect of getting close to a point where we can no longer talk about a State education system.

Maisuria, A. (2014) The Neo-liberalisation Policy Agenda and Its Consequences for Education in England: a focus on resistance now and possibilities for the future. Policy Futures in Education. 12 (2): pp.286‑296. 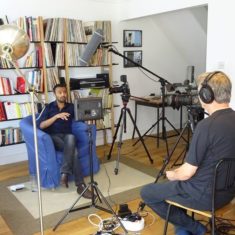 Alpesh Maisuria is a Senior Lecturer at the University of East London. He is interested in social class and educational policy, particularly framing understanding these as part of neoliberalisation. Of particular focus is Academy Schools and the dismantling of State education through creating a culture of fear and performativity. Alpesh takes the position that reforms to public services is part of a broader class struggle, which has gradually intensified with every government since 1979.

Alpesh is an Assistant Editor of The Journal for Critical Education Policy Studies.

Bubble, toil and trouble: School leadership as Shakespearean tragedy in and after Covid-19