In our recent article in the British Journal of Educational Technology, ‘Intra‐active entanglements: What posthuman and new materialist frameworks can offer the learning sciences’, we expand the focus of learning science research methodologies. In so doing, we argue against research models that define learning in terms of fixed, static outcomes and that see humans as the sole drivers of knowledge making. Instead, we argue for research models that privilege the emergent relationalities between humans, nonhumans and more-than-humans as the driving force behind knowledge-making – a move that we believe better captures how learning happens (Sheridan, Lemieux, Do Nascimento, & Arnseth, 2020).

‘We argue for research models that privilege the emergent relationalities between humans, nonhumans and more-than-humans as the driving force behind knowledge-making.’

We situate our call to expand learning sciences research methodologies in a series of vignettes across four international research sites that analyse digital camps, classroom makerspaces, outdoor excursions and museum settings. Corroborating findings from extant studies on the role of materiality (Rowsell & Shillitoe, 2019) in makerspace learning (Keune & Peppler, 2019), we found that learning, as a concept used in makerspace research, depends as equally on nonhumans as it does on humans. 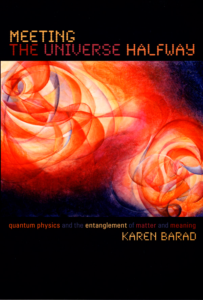 Our work draws upon a range of posthumanist and new materialist thinkers, including Karen Barad, whose book cover (figure 1) captures a shared understanding of how all relations are in continual motion, never fully finished and always partial to and emerging with who and what are entangled in the encounter. As we begin to think about materials as being enmeshed-with and not separate from our work, we move away from anthropocentric representations of knowledge-making. Instead, we draw on insights from these theories to understand human and non-human entanglements, opening up different forms of knowing and being in and with our research. These new ways of research privilege emergent relations.

The implications of this research for policy and practice makes us redefine both learning and makerspace research. The concept of learning is not bound by fixed, human-centric representations that make pedagogical concepts like innovation and creativity into static things; instead, learning in the frameworks we discuss are emergent practices that call researchers to investigate the situated yet dynamic relationalities through which learning occurs. As key places where this learning happens, makerspaces can be useful research sites, whether researchers focus across generations (from early childhood to seasoned teachers) or across spatial settings (from the forest to the digital media camp and the structured classroom).

Stemming from evidence-based research, we encourage researchers, teachers and practitioners to seriously consider the frameworks they use to research makerspace and maker activities. This consideration challenges the anthropocentric terms by which education has historically abided and calls instead for researchers to attend to the relations – both human and nonhuman – as the central ‘matters’ of learning sciences methodologies. Such matters are central to both the scene of learning sciences research as well as the materialisations of learning that help us understand the entangled relations that define our practices. Because we recognise the difficulty of reconceptualising our pedagogical and research practices, we offer our vignettes to help practitioners see the promise for such reconsiderations that privilege the entangled, emergent relations at the scene of learning – something we believe is central to learning sciences methodologies.

This blog post is based on the article ‘Intra‐active entanglements: What posthuman and new materialist frameworks can offer the learning sciences’ by Mary P. Sheridan, Amélie Lemieux, Ashley Do Nascimento and Hans Christian Arnseth, published in the British Journal of Educational Technology. It is currently free to view for non-subscribers for a limited period, courtesy of our publisher, Wiley. 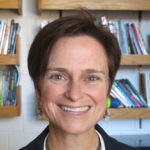 Mary P. Sheridan is interested in digital composing, community engagement, and feminist methodologies. Sheridan has written Girls, feminism, and grassroots literacies and Design literacies (with Jennifer Rowsell) and co-edited multiple collections, including Making future matters, Writing for engagement and Writing studies research in practice. Sheridan has been awarded the Outstanding Book Award from the Coalition of Women Scholars in the History of Rhetoric and Composition, and the Book of the Year Award from Reflections. 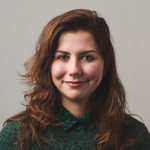 Amélie Lemieux’s research interests include maker education and cross-disciplinary literacies informed by posthumanist perspectives. A Lieutenant-Governor’s Medal recipient (Quebec) for academic excellence and community engagement, she received SSHRC and FRQSC funding for her combined work in multimodality, arts-informed research and literacies with adolescents. 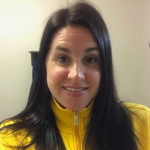 Ashley Do Nascimento’s research interests focus on how children/youth understand the environment in the face of 21st century climate change. Do Nascimento utilises posthumanist and feminist new materialist frameworks to research with youth, paying particular attention to polluted waters. 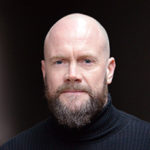 Hans Christian Arnseth is interested in how digital technologies transform learning, cognition and identity across formal and informal contexts. Professor Arnseth has substantial experience in leading research projects, and recently was PI for the Norwegian research team participating in an EU-funded (MCSA RISE) project called MakEY (Makerspaces in the Early Years). He recently started to explore how posthuman approaches can provide new ways of understanding and learning and digital technologies.

Where does materiality take us? Posthuman methodological pathways for maker literacies research