From 26 June until early November 1917 2nd Lt Wilfred Owen of the Manchester Regiment convalesced at Craiglockhart War Hospital, Edinburgh. There is limited focus on Owen’s time in Scotland, but this has been the main focus of my research: to better understand his Edinburgh experience and show how this contributed to his enlightenment. That educational experience and enlightenment in Edinburgh saw him produce more poetry than at any other time of his life (McLennan 2016) and arguably his most powerful poetry.* My interdisciplinary research across history, English literature and medicine has shed new light on Owen’s re-education in Edinburgh, a place he called his ‘free and easy Oxford’, and on its impact on both him and those he taught. Little known is the role of Craiglockhart doctor Arthur Brock’s ergotherapy cure. As part of their re-education, Brock arranged for four shell-shock victims to teach in specialist areas at a nearby school. Owen taught English literature at Tynecastle High.

Few know that Owen was a teacher, yet I argue that this was one of Owen’s influences on society. His soldiering did what it did. His poetry did what it did. But, I argue, his teaching did more than just ‘teach’: he educated. I proposed that Owen enhanced his students’ education as a result of active learning approaches, including outdoor learning (McLennan 2013). The approaches, led by Owen, were perhaps inspired by the ‘re-education’ treatment he himself was receiving from Brock. Historic lessons are useful at a time when many are taking ahistorical and conservative approaches to educational change.

The first of them is that schooling must be delivered by teachers, and that schools themselves best deliver learning. Owen showed how the working world can be a key partner in the delivery of learning. Schools are buildings erected for economic necessity. Owen’s collected letters (Bell 1985) show him taking students into the hills to bring an experiential link to appreciating the literary ‘greats’. In teaching Stevenson, for example, he took students to the Pentland Hills and the cottage in which Stevenson wrote. Students could learn the true meaning of the words in the environment that inspired them. In December 1917 Owen’s students made wigwams, enacting Hiawatha. Furthermore, as a practicing poet, Owen would have been well placed to give insights. Stevenson’s St. Ives and Longfellow’s The Song of Hiawatha were brought alive. The students’ teacher sent Owen a copy of Hiawatha’ just before he died, as a reminder of the teaching he had undertaken.

‘Owen was not, and would not be, bound by merely outcome-focussed education. His success as a teacher offers us two important lessons.’

Owen was not, and would not be, bound by merely outcome-focussed education. He did not have to be: he was not a trained teacher and was not bound by regulations. His success as a teacher offers us two important lessons. Firstly, the value of having outside experts teaching in the school, whose sole focus is not exam results but on something wider and more profound. This is reflected in current studies on the impact of ‘guest’ speakers (Barge 2017; Merle, 2017).

Secondly, this highlights the importance of achievement and experiences over exam attainment. The experiences Owen provided were memorable. Our fondest memories of school tend to be school trips, outdoor learning, or when visiting speakers inspired us. Here the learner achieves both personally and academically (Merle 2017).

Arguably Owen’s teaching was not so much preaching ‘Anthem for Doomed Youth’ as conducting the ‘Anthem for a Determined Youth’.

This November marks the 100th anniversary of the end of World War One. Following on from a range of public engagement events in 2017, an arts, civic and education partnership is bringing together a reconceptualisation of remembrance, more global in its reach. On the afternoon of Remembrance Sunday, at 4pm CET, musicians across the globe will strike up in harmony forming a world orchestra. Participants are asked to share their music through social media using the hashtag #iPlay4Peace.

*‘Anthem for Doomed Youth’ and ‘Dulce Et Decorum Est’, among many others, were produced during Owen’s time in Edinburgh between late June and early November 1917. 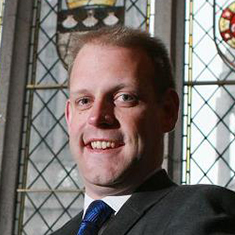 Neil McLennan has held a number of key roles in supporting change and improvement in education. After a teaching career in the central belt he was seconded to Learning and Teaching Scotland (now Education Scotland) as a national development officer. After two successful secondments implementing national policy he moved to the north east as quality improvement officer (education, culture and sport) for Aberdeen City Council, where he also undertook a period as acting service manager (schools and curriculum). He continues to be a reading champion for Aberdeen city council, and is also a burgess of guild of the City and Royal Burgh of Aberdeen.