With increasing pressure on academics and other professionals to gain doctorates to assure career progression, doing a PhD by published work (PhDPW) makes eminent sense. This is particularly true for colleagues who might have entered higher education (HE) teaching from another discipline in which it is not common to have a doctorate on entry – for example, surveying, physiotherapy, nursing or teaching. Gaining a PhD alongside doing a full-time job can be a heart-breaking business due to the cost and all the competing pressures on time and resources, and one of the reasons I’ve started passionately advocating this route is because I’ve seen so many people fall by the wayside.

‘With increasing pressure on academics and other professionals to gain doctorates to assure career progression, doing a PhD by published work (PhDPW) makes eminent sense – particularly for colleagues who have entered HE teaching from another discipline in which having a doctorate on entry is not common.’

I did mine towards the end of my career (I’m an independent consultant now), and for me it made sense because I could draw upon a substantial body of work published over 30 years – although this in itself presented problems in working out what to choose to include. Most higher education institutions (HEIs) expect candidates to write a continuous connected narrative (anywhere from 5,000 to 20,000 words) in which they make the case for the originality of their contribution to the scholarship of the field, demonstrate their underpinning theoretical perspectives, and the appropriateness of their methods.

Many invite candidates to identify a ‘golden thread’ that demonstrates the coherence of the claim: in my case I expected it to be assessment, but my astute director of studies suggested instead that what united my oeuvre was ways of bringing about change (with individuals, teams, HEIs and even nations). He helped me to choose which of my publications demonstrated this and, as I had been writing for decades, I was able to show how my approaches and methodologies changed over time and became more nuanced and sophisticated. I could demonstrate impact, both qualitatively (with quotes from colleagues, peers, clients and students) and quantitatively (with data about book sales, citations internationally and so on).

As a political act, almost everything I published was done jointly: this doesn’t tend to make line-managers happy, but I argue that it results in better publications, and I’ve co-authored and edited many times with complete novices in order to ‘show them the ropes’. However, when making my doctoral case I had to obtain testimonials to put in the appendices where co-authors confirmed the relative share of each submitted publication, and I also chose to write a final ‘capstone’ journal article to bring together my ideas about bringing about change (actually I wrote two – Brown [2011] and Brown [2012] – but only submitted one.)

For people approaching this route from scratch, it works rather differently. As part of my current work I support several candidates writing in the fields of HE learning, teaching and assessment, some of whom have substantial extant bodies of publications. However, there are a couple who started with practically nothing, and who therefore were able to think and write strategically over a three-to-five-year period, which made writing their connecting narratives simpler. With these candidates, I advise them to undertake basic training in research methods, either at their own HEIs or through organisations like the Society for Research in Higher Education, to underpin their research approaches.

Requirements for PhDs by this route are hugely variable: the smallest number of papers I’ve seen required is three and the largest eight; some universities specify the kinds of journals in which papers should be published while others do not. Another significant variable is whether other kinds of publication are acceptable: some accept books and/or individual chapters or reports, whereas for others the refereed journal article is the gold standard. Some will accept external candidates, while others will only accept employees or alumni. In either case, it is imperative to find a director of studies who understands the route and that university’s regulations: I helped to rescue one candidate whose supervisor was trying to make her rewrite her published papers and change her methodologies! Helping the university choose external examiners familiar with the route is also important: this used to be harder to achieve, but nowadays more are available.

A significant advantage of the PhDPW approach is that many working in HE are likely already to be publishing, and therefore this can be an incremental way by which to kill two birds with one stone.

Another advantage is that because all the papers submitted have been already peer-reviewed, when candidates go for vivas they can be confident that they won’t be interrogated on basic methodology or standards of scholarship because their work has already been deemed to be at an appropriate academic level by recognised peers.

One disadvantage is that some people don’t feel that it is equivalent to a traditional PhD. A family member told me mine wasn’t a proper one (unlike hers) because I didn’t do it from scratch over seven years – but my awarding HEI’s regulations clearly state that all its routes offer equivalence, and so does QAA guidance, and that’s good enough for me! If you are interested in pursuing this route, the best advice is to read the book by my former colleague, Sue Smith (2015), which is a current, comprehensive and invaluable guide. 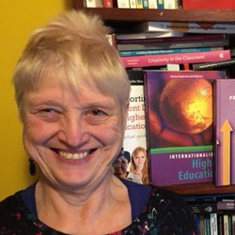 Sally Brown, PhD (by publication), enjoys life as an independent consultant in learning, teaching and assessment and emerita professor at Leeds Beckett University where she was, until July 2010, pro-vice-chancellor (academic). She is also visiting professor at the universities of Plymouth, South Wales, Edge Hill and Liverpool John Moores. She holds honorary doctorates from Plymouth University, Kingston University and Edinburgh Napier University. Sally is chair of the Association of National Teaching Fellows, a principal fellow of the Higher Education Academy, a Staff and Educational Development Association (SEDA) senior fellow and a UK National Teaching Fellow.

You may also be interested in the upcoming BERA event, ‘Developing Professional Research: Making an impact‘, being held at the University of Cumbria on Thursday 7 June.

Great Mistakes in Education Policy: And how to avoid them in the future