With new students arriving in campuses across the country, now is a good a time as any to think about what it means to be, and to be seen as, a student in the UK.

In July the Independent Commission for Fees published their final report outlining the impact of the fee regime introduced in 2012-13. Reiterating concerns voiced by the sector over a number of years, the ICOF explicitly align the “significant and sustained fall in part-time students and mature students” with the fee and funding changes. Mature students appear to not fit a funding structure which recast the sector as overwhelmingly belonging to young first degree, full-time, entrants.

Even taking into account HEFCE’s analysis of the take up of courses ‘other than’ first degrees, it is clear that the ideal post-Browne student is one ‘other than’ those mature learners who bring with them more life experience and who are more likely to be from underrepresented or disadvantaged backgrounds.

If the Government and the sector want to continue to widen participation in higher education in England, we are all going to have to shift our perceptions of how we see students and widen our understandings of the student experience.

Bournemouth University’s Faculty of Health and Social Sciences [HSS] presents an interesting case-study for mature student participation. It carries over half of the university’s mature student population and from 2012-13 through to 2014-15 the faculty has seen an increase in mature applicants and enrolments of 13 per cent.

It is through this felt sense of belonging that increased participation retention rates, as well positive personal and academic outcomes for students can be realised

As part of our Fair Access Research project we held a focus group of 10 mature final year HSS students to explore what their own student experiences. The participants overwhelming expressed a feeling of belonging to the academic side of student life (feeling included in classes, receiving sufficient academic support, the quality of teaching was at a high standard). This reiterates the findings of the ground-breaking What Works? Programme which strongly suggests that the “academic sphere is the most important site for nurturing participation of the type which engenders a sense of belonging.” It is through this felt sense of belonging that increased participation retention rates, as well positive personal and academic outcomes for students can be realised.

In our focus group, however, when it came to the more social side of the student experiences, the majority of responses were far more ambivalent. The students stated that they were not as involved in social and extra-curricula activities as they would have liked. When asked why, the responses varied from the academic side being the priority (“… It was big enough doing this course” to additional family and employment commitments (“[I have to] pay the mortgage and … children to look after”). For these learners the experience of being a student appeared to exclude the more social aspects of university life.

The responses did suggest that the students would have liked to have been involved more in social and extra-curricula activities within the university, but felt that it was not for them. One participant stated:

“If there, maybe, was some sort of thing out there to bridge the gap to enable me to access [social activities] more … to identify that in me. I mean if someone identified that in me…”

For this mature student, at least, being identified as someone who might want to be involved in the social side of student life, and that being made accessible, could have given them a broader experience of being a student.

That such feelings persist at an institution with an active and growing mature student population, is illustrative of the deeply rooted challenges facing mature students in higher education.

As a sector we need to be more pro-active in identifying the needs of all of our students, including their social and emotional needs. And this is particularly important for those who have been cast as ‘other than’ the ideal student. 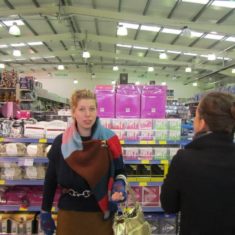 Alex is the Post-Doctoral Research Fellow in Fair Access to Higher Education. Her research interests are broad, and include the areas of pedagogical theory, the history of thought, and feminist philosophy. She has worked at the University of Bristol and at UWE, and most recently at the Office for Fair Access, supporting the development of their research activities. Alex is committed to making education accessible to marginalised and vulnerable adults and young people, through developing learning and research rooted in care and creativity.

Why does the devil have all the good tunes? How researchers continue to put one over teachers in the HE promotion stakes