In an earlier BERA blog post (‘Voices in the Air’ 20th September 2016), Chris Husbands described the years that followed the 2010 general election as a “frenetic period of change in education” during which Secretary of State for Education, Michael Gove MP, carried out a “radical reconstruction” of the system. During this period, I worked as an adviser to schools – particularly supporting the teaching of primary mathematics and working with subject leaders to help them to keep abreast of policy changes – and was made redundant as a result of the “radical reconstruction” of Local Authorities.

Unsurprisingly then, when I embarked upon a PhD in 2014, the policy changes that had been in the offing since 2010 and which had directly affected me, were central to my proposal. One Gove quote in particular kept coming to the forefront of my mind. In an open letter in June 2012, writing to thank Tim Oates for his work as chair of the Expert Panel for the National Curriculum Review and attaching the first draft of the reformed National Curriculum (DfE, 2013), Gove wrote of how he hoped the changes would be received:

… our curriculum changes must provide the gifted teachers we have in our classrooms with both a sense of the higher standards that we know they are driven to reach and the freedom to develop more innovative and effective approaches to teaching. (Gove, 2012) – emphasis added

To begin with, I was interested in the notion of teachers as “gifted” as this seemed a far cry from how teachers on the ground felt they were perceived by Whitehall. But once PhD proposals were written and ethical clearance was granted, I began to observe teachers in their classrooms and realised that I was more interested in whether teachers actually experienced any “sense of … freedom” to innovate.

My research has followed three Year 6 teachers through all of their teaching of fractions in 2015-16; the first year that the 2014 National Curriculum was statutory for Year 6 classes, and the first year that statutory National Curriculum tests reflected the new expectations. When I spoke to my participants about whether they felt they had freedom to decide how to teach, responses were telling.

Now it is possible that my experience is skewed by only observing teachers who work in Year 6 classrooms – where accountability pressures are most keenly felt – but as Gove didn’t exclude this group from his statement, I assume that he intended for all teachers in all year groups to feel that they have the freedom to innovate. But do they?

Two of my participants, Anna and Bernard, repeatedly described how the content of the National Curriculum tests – and the imposition of time restrictions – influenced their decisions about how to teach mathematics topics. No sense of freedom there (and no great surprises either).

But my third participant, Claire, did not appear to feel this same pressure. When we discussed her teaching she said that “I’ve probably got licence [from the Headteacher, not Gove] to do whatever I need to do”. So what makes Claire different?

While Anna and Bernard were both early in their careers, Claire had been teaching for more than 15 years. But length of service alone does not appear to account for their different perspectives. During her career, Claire has (among other things) completed a Mathematics Specialist Teacher (MaST) qualification which might be seen as setting her apart as a “gifted” teacher of mathematics. Is this why her Headteacher trusts her?

Or is it that Claire teaches the bottom set and therefore, unlike Anna and Bernard, none of her pupils were expected to pass the National Curriculum tests. Is that why the Headteacher can afford to grant her freedom to innovate?

I have become fascinated by Claire and have found myself speculating about whether she would feel that she had less freedom to innovate if she taught a top set group under pressure for all pupils to pass the tests. Or is her experience – her internally persuasive discourse – such that she will innovate no matter where she teaches? And if that is the case then would a Headteacher risk putting her with a top set? Despite the rhetoric from Gove, is innovation incompatible with the way in which school, teacher and pupil performance is judged? 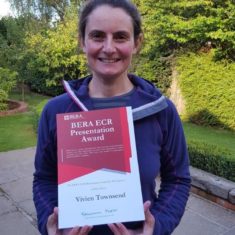 Vivien Townsend is a doctoral student at Manchester Metropolitan University working with Professor Yvette Solomon and Dr Sue Pope. She is in receipt of a studentship for her research on ‘The new primary mathematics National Curriculum for England – Teacher knowledge and discourses of mastery in the teaching of fractions’. She has worked as a primary school teacher, a primary mathematics consultant and an ITE tutor. At the BERA conference 2016, Vivien’s presentation ‘Making pedagogical choices in times of change’ was judged third in the ECR paper competition.