There have been a lot of monster metaphors in recent blog posts about Learning Styles [ http://www.tes.com.c.tes.ent.platform.sh/news/blog/why-does-idea-learning-styles-keep-getting-resurrected http://blog.learnlets.com/?p=4370 ]. I’ve used it myself in a new article in Research: Learning and Practice :

It’s nearly the end of the scary movie. The evil protagonist has been dealt a series of catastrophic blows and has fallen back, apparently lifeless.  The heroes are beginning to celebrate, to relax, perhaps moving on to other things.  We (the viewers) know better.  It’s not dead, no matter how mangled. It’s coming back, if not immediately for one last shock then certainly in the sequel.  I’m sure many academics have days when they feel their life resembles a horror movie, it’s just that in relation to Learning Styles I am one of those weary, gore-spattered actors.  No matter what we’ve hit it with, the thing won’t die.

Ok, so I was ticked off when I wrote that – and seduced by the metaphor – but I am starting to wonder about why I feel that way. Perhaps it’s time to get to know my monster a bit better.

Our review of the theoretical basis of and evidence for learning styles came out in 2004.  It concluded that while there is considerable charm and face validity in the idea of learning styles, the field was confused and confusing.  There were three cascading problems:

So, there you are: learning styles sound like they should work but there’s no general agreement on what a learning style is, it’s not possible to reliably measure it and using it as the basis for curriculum design or pedagogy doesn’t help teachers or learners to do better. Shall we move on?

Apparently not. This is still my most cited work, though how it is used remains problematic, as I discuss in the new paper. Pashler and colleagues produced similar conclusions and that didn’t seem to work either. The people who didn’t agree with me continue not to agree with me, as Newton (2015) points out, finding 109 recent papers in PubMed and ERIC, 89% of which support the idea of Learning Styles. Why do practitioners in particular find learning styles so attractive?  Can Charles Peirce and The Fixation of Belief help me? 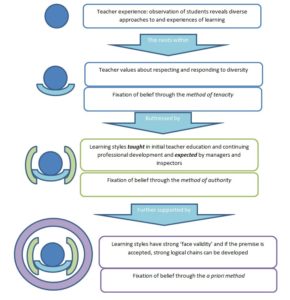 Belief in learning styles can only be challenged by the method of science – by practitioner enquiry and this will only happen when teachers’ own experience of learning styles is unsatisfactory enough to prompt them to challenge their fixed beliefs.

“Give me your arm old monster” (with apologies to Philip Larkin), I think you’ll be my monster for a while yet.

Reader in Legal Education Research at Northumbria School of Law

Dr. Elaine Hall joined Northumbria School of Law as a Reader in Legal Education Research in 2013 having been Lecturer in Research Methods at Newcastle University. Her research career has spanned seventeen years and more than thirty funded projects.  This research has been directed towards the experience of teaching and learning from the early years to old age, as curriculum-specific, metacognitive and professional practices. It has also included research into learning styles, an area of considerable interest to others, apparently.