Why do some stories resonate with readers more than others? It is probably because they minimise the distance between the reader and the story character. The classic reader-response theory (Rosenblatt, 1978) proposes that texts need to resonate with readers and be relevant to their lives. To this, the reading distancing theory (Kucirkova, 2019) adds an important element: that a book’s resonance with readers depends on the psychological distance between the characteristics of the story protagonists and those of the readers. The distance is relevant not only for readers’ engagement with a story but also for their empathy with the story character. There is no magic formula, but personalised books cut right into the self–other distance.

Personalised books use information about readers (for example their names, life experiences or physical appearance) to directly individualise the story content for them. In my personalised version of Cinderella, the main character still marries the prince charming, but her name is Natalia and she has my hair and eye colour. Such basic personalisation ensures, according to the publishers, greater identification with the story character. Publishers also point out that for children who are traditionally not positioned as the main story heroes, personalised books can boost children’s self-esteem and interest in reading.

Parents interested in getting a personalised story for their children can nowadays choose from a wide variety of personalised book publishers. The simple ones offer personalisation with a few clicks: parents need only to specify their children’s name, hair, skin or eye colour to create a customised version of a popular story. The more sophisticated ones offer personalisation as the end product of the readers’ direct engagement with their platform (for example by playing some games in which the app collects information about the child). In our latest study (Bruheim Jensen et al., 2021), the main character was the child who had an adventure in Alaska, with other characters and the story-plot set standard by the publisher.

While the distance between the self and the other is easier to strike for people who are similar to us (the so-called parochial empathy), it is harder to achieve for people dissimilar from us (the so-called rational compassion for out-group members; see Kucirkova, 2019). Good stories capitalise on familiarity to shorten the distance between readers and the unknown world of others. The greatest, untapped potential of personalised books is therefore to not only motivate children to read, but also to teach them about people who lead different lives and have different experiences.

‘The greatest, untapped potential of personalised books is therefore to not only motivate children to read, but also to teach them about people who lead different lives and have different experiences.’

It follows that personalised books that reach beyond the personal experience would be the most successful application of the distance theory. For example, children’s names and pictures could be used to motivate children to read radically impersonal texts, such as historic novels. Rather than positioning children as story heroes in fictional tales, children could be portrayed as heroes in their local communities, helping those they would typically not think of as their ‘friends’.

In our study, children were positioned as the main story hero who befriends a bear and introduces the bear to other story characters. The children enthusiastically embraced the idea and reported how much they enjoyed having the cute bear as their friend. A bear is very different from a real human friend, even though this bear carried human characteristics. What is interesting from the distance theory perspective is that only the children who liked seeing themselves as the story hero also liked the bear.

We don’t know whether the children would embrace the bear as their best friend if the animal was portrayed as a giant salamander or another animal typically considered as less cute. Would the children still be motivated to read the story again and again and introduce the characters to their friends? What is clear from our and similar studies is that the distance between the self and the other is not fixed. Rather, the distance can only stretch so far before it snaps with loss of children’s reading interest.

Rosenblatt, L. M. (1978). The reader, the text, the poem: The transactional theory of the literary work. Southern Illinois University Press. 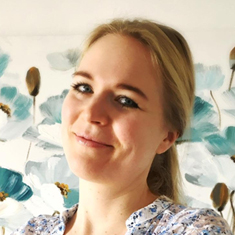 Natalia Kucirkova is professor of early childhood education and development at the University of Stavanger, Norway and professor of reading and children’s development at the Open University, UK. Natalia’s work is concerned with social justice in children’s literacy and use of technologies. She is the founder of the International Collective of Children’s Digital Books which connects research and design in children’s ebooks and literacy apps, and chair of the Children’s Digital Book Award, the first such award judged entirely by teachers. Her research takes place collaboratively across academia, commercial and third sectors. Natalia is a Jacobs Foundation research fellow for 2021–2023.

Phonics ‘first and fast’… but at what cost?