In this blog post, Mona Sakr and Shaddai Tembo recap key points from their recent BERA event on race and ethnicity in the early years workforce in maintained nursery schools in England.

As part of the broader push towards greater equity in education, it has long been recognised that having a workforce that better represents the racial diversity within society is vital for a variety of reasons – including the character, ubiquity, pervasiveness, duration and importance of teaching as a social activity (Thomas, 2022). However, to date, many of the existing studies on the roles of race and ethnicity in the profession have taken place in primary, secondary and higher education contexts. As such, there has been little attention given to the workforce in the early years.

In the early years policy context in England, the focus has primarily been on tackling the gender imbalance. For instance, the Early Years Workforce Strategy (DfE, 2017, p. 25) makes explicit reference to the ‘gender diversity of the workforce’, stating: ‘We recognise that recruitment and retention of men is a challenge for the early years sector’. However, there is no reference to racial diversity and the value it could bring to enhancing children’s experiences.

In his research paper, ‘Black educators in (white) settings: Making racial identity visible in Early Childhood Education and Care in England, UK’ (Tembo, 2020), Shaddai set out to foreground counter-narratives of Black teachers that expose the tacit nature of racism and marginalisation in education.

In this paper it was found that, for the educators interviewed, their racial identity significantly contributed to their sense of professional identity in both positive and more limited ways. Shaddai concluded that it is crucial to move towards a more critically informed understanding of the kinds of influence that minoritised educators can have – such as challenging the normative experience of working in the profession where racial and ethnic identity is all too often considered to be insignificant as part of one’s broader professional identity. This justified a need for further research in this area.

With funding from BERA, the project Ethnicity and the Early Years Workforce: A Census of Maintained Nursery Schools in England set out to address these gaps in a modest way. While maintained nursery schools in England represent just one small segment of the sector, the aim of the research was to start the ball rolling with the aim that future data-gathering exercises – ideally those conducted annually by DfE – might learn from the methods and findings of this small-scale study.

We were buoyed by the response from the sector: 95 maintained nursery schools (about a quarter of all those in England) opted to participate; 290 staff within these nursery schools completed the survey.

The findings demonstrate just how much is hidden by the DfE’s line that ethnicity of the workforce is in line with the adult population of the UK (DfE, 2021). As figures 1, 2 and 3 demonstrate, the main findings are that: 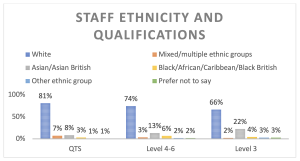 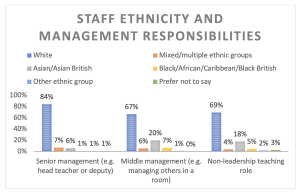 The next steps are to extend quantitative data collection to look at more of the sector and to probe findings through in-depth qualitative interviews. We are currently carrying out interviews with head teachers of maintained nursery schools to understand more about their perspectives and experiences on ethnicity, their staff and their own personal journey to leadership. 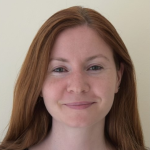 Dr Mona Sakr is Senior Lecturer in Education and Early Childhood. As a researcher in Early Years (EY) provision, she has published extensively on creative, digital and playful pedagogies. Mona’s current research is an exploration of pedagogical, organisational and community leadership in the context of EY policy. Forthcoming books (with Bloomsbury) include an introduction to Social Leadership in Early Childhood Education and Care, and an edited volume on international perspectives on EY pedagogical leadership. 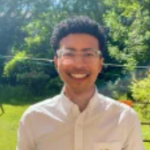 Shaddai Tembo is a lecturer in early childhood studies (UK and China) at Bath Spa University and an associate lecturer at the Open University. He is a trustee for Early Education and the Fatherhood Institute, and an independent writer and speaker through Critical Early Years. Shaddai is currently engaged in a research project, funded by the Froebel Trust, on developing an anti-racist framework within Froebelian pedagogy. You can follow him on Twitter @CriticalEYears.

Closing the gap in access to free ‘universal’ early education: What affects participation among low-income families?