Metrics of school and teacher performance are increasingly used by policymakers and in the UK education systems to determine, for example, performance-related pay and positions in school league tables. A commonly used form of metrics are ‘value-added’ measures of educational progress, which estimate a schools’ or teachers’ contribution – the value that they add – to their student’s education. These metrics are estimated by comparing that student’s academic performance under the school or teacher to their performance in previous years. By using the student as their own unit of comparison, value-added measures attempt to control for all differences between students that are stable over time, and therefore aim to provide unbiased measures of school and teacher performance. However, the strength of value-added measures in providing accurate and unbiased measures of performance has been questioned (Perry 2016; Taylor and Nguyen 2006), and it is not clear how well they control for time-stable factors such as students’ prior ability.

Our analyses provided little evidence of genetic contributions to raw value-added measures built only from key stage point score data, as displayed by the blue bars in figure 1. Of course, we cannot definitively rule out genetic contributions as there was some uncertainty in the estimates. 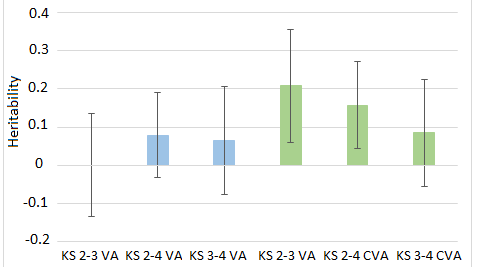 We did, however, find evidence for genetic contributions to contextual value-added measures at two of the three timepoints: between ages 11 and 14, and ages 11 and 16, as shown by the green bars in figure 1. This appears somewhat counterintuitive, because the contextual value-added measures additionally controlled for between-individual differences such as gender. Further analyses based upon simulated data suggested that this could have been due to measurement error at the age 11 test, which would inflate the estimated genetic contributions. 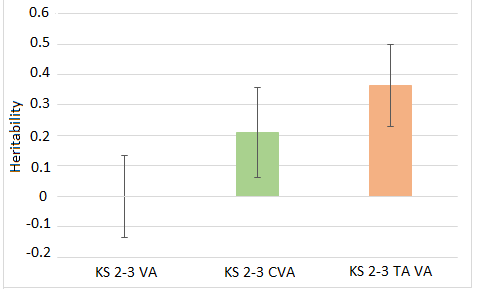 Our results demonstrate that some value-added measures may not be robust to genetic differences between students, particularly when calculated from teacher-reported ability. Value-added measures should therefore be used with caution in educational research and policy, as they have the potential to provide unfair assessment and accountability measures of teachers or schools, and they may be biased indicators of school and teacher performance.

*This blog post is based on the article ‘Testing the validity of value-added measures of educational progress with genetic data’ by Tim T Morris , Neil M Davies, Danny Dorling, Rebecca C Richmond and George Davey Smith, published in the British Educational Research Journal. The article is now free-to-view to non-subscribers for a limited period. 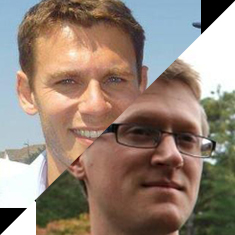 Tim Morris is a quantitative social geographer based at the MRC Integrative Epidemiology Unit at the University of Bristol. His research interests lie in the social and geographical patterning of education and health, and his work currently looks at how genetic data can be used to investigate social differences and inequalities in education. @bristimtom

Neil Davies is an epidemiologist based at the MRC Integrative Epidemiology Unit. His research interests span epidemiology, economics and geography, with a particular focus on causation. He is currently leading a research project funded by the ESRC that looks to integrate evidence from molecular genetics into education research. @nm_davies