Today’s educational policy is co-produced, through policy bureaucrat’s words and technocrat’s lines of code. The global move towards digital governance and the digitising of educational practices relies heavily on the presence of software code to create digital data processing programs (Williamson, 2017). Investigating the development and use of OneSchool provides context for exploring the authors who bring policy into being through word and code.

The Department of Education and Training in Queensland, Australia, developed the online student management system, OneSchool, in-house. Described as ‘an 8 million page a day system’ by one senior technocrat (ST5), it is referred to as ‘a school-driven initiative… that provides a single point of truth about teaching, learning, schools, the curriculum, performance and financials’ (Department of Education Training, 2015). My research is informed by interviews conducted in 2016 with elites and experts who were close to the power and decision-making process during the development of OneSchool, along with senior bureaucrats (SBs), senior technocrats (STs) and school leaders (SLs), including principals.

A Foucauldian-inspired lens was used to identify and explore how a range of authors used words and code to develop policy works. Participants described policy as, ‘legislation’ (SB32) and as being ‘nebulous’ (SL6). Analysis of the wide-ranging answers to the question, ‘What is policy?’ revealed that policy had to do with people doing ‘things’; it related to legislation, procedures and guidelines; it was inclusive of the purpose and delivery; and described the effect on educational work. It was not just a document written by corporate or school authors, but included, as Foucault (1991) discussed, the discourse in which a work existed.

In 2003, when procurement to purchase a school management system commenced, the technology industry was seen to have ‘completely ignored schooling as a marketplace’ (SB2). International players now operate strongly in the commercial field of educational management technology. As the options have expanded, a senior technocrat described the cycle of development as shifting from a centralised system using only OneSchool, to a more federated system, with ‘add-ons’ and ‘third-party providers’ plugging into OneSchool (ST6). Consequently, commercial organisations and businesses are becoming co-authors of future policy works, as external coders are invited through school purchases of applications that plug in to OneSchool.

Commercial organisations and businesses are becoming co-authors of future policy works… To be mutually beneficial, educationalists, bureaucrats and technocrats must communicate their needs clearly to each other.

Digitising educational practices relies on the creation of processes through lines of code (Williamson, 2017). This research has shown that to be mutually beneficial, educationalists, bureaucrats and technocrats must communicate their needs clearly to each other. The coding of curriculum planning, during the development of OneSchool, was viewed as ‘blue-sky development’ (ST5). Employed as a subject matter expert, I recall those initial conversations with developers. The question, ‘What do teachers do?’ was met with silence as we tried to explain the complex process that teachers ‘do’ to developers who would write it into being with code. After minutes of silence and false starts, the developer left: ‘Call me when you know’. We had not yet developed a shared understanding of each other’s languages that would translate the words of curriculum policies and teaching practices into code.

When interviewing a senior bureaucrat, I asked if working with the OneSchool developers had altered the policy process, and if it had led to a better policy. The answer was,

As schools take up the option of purchasing third-party applications, external code writers become proxy policy authors and shape the discourse through the demands of commercialisation.

I am not saying that the move to allow schools to purchase commercial applications is ‘bad’. In fact, I take Foucault’s point that it is not that everything is bad, but rather that it is dangerous. And it is because it is dangerous that ‘we’ in education – both practitioners and researchers – are going to have to be active rather than passive in our understanding and use of, and investigations into, the use of code and words in policy that disciplines the digitalisation of educational processes. 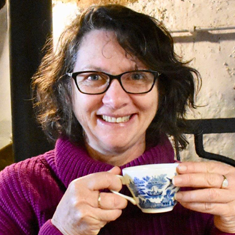 Jennifer Clutterbuck has been involved in education throughout her life in one way or another. An early childhood teacher for 25 years, Jennifer moved to curriculum and policy-writing before becoming a business analyst for the Queensland Department of Education’s in-house development of the online student management system, OneSchool.

Currently an OWL (older, wiser learner), she is completing her doctorate with the University of Queensland, investigating the role of digital infrastructure in education policy and data cycles through writing a genealogy of the OneSchool system. She enjoys combining her doctoral journey with conferences such as BERA’s that provide international networking opportunities, as well as continuing with her managerial role in the early childhood and community engagement sector.