Belfast is packed with history, culture, exciting events, great food, super shopping – you might even spot a ship or two. You’ll also find some of the friendliest people you’ll ever meet.
Visit Belfast will be putting together a fantastic delegate package with discounts for attractions, restaurants and shops by showing your delegate badge. This will be published nearer the time, however look at what was on offer this year here
Buy the Visitor Day Pass from only £6.30. This fantastic pass offers you unlimited travel on buses, trains and the airport transfer bus, as well as discounts on numerous attractions. You can buy a one day, two day or three day pass. For full information on everywhere the pass is valid and to buy click here.

To help you make the most of your trip to Belfast we have picked out our top ten things to do when you are in the city. 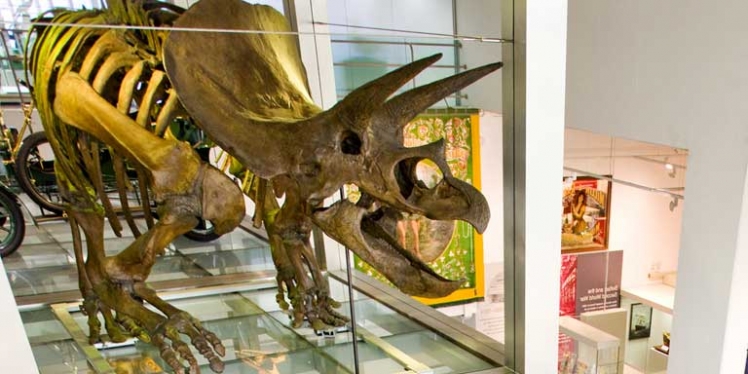 Come face to face with dinosaurs, meet an Ancient Egyptian Mummy and see modern masterpieces with a visit to the Ulster Museum. As Northern Ireland’s treasure house of the past and present, the museum is home to a rich collection of art, history and natural sciences and free to all visitors. The revitalised museum tells the story of the people of the north of Ireland from earliest times to the present day. Impressive galleries and interactive discovery zones bring history, science and art collections to life for visitors of all ages.
The Ulster Museum is part of National Museums Northern Ireland, which also includes the Ulster Folk & Transport Museum, Ulster American Folk Park, the W5 Science Centre and Armagh County Museum.
More information 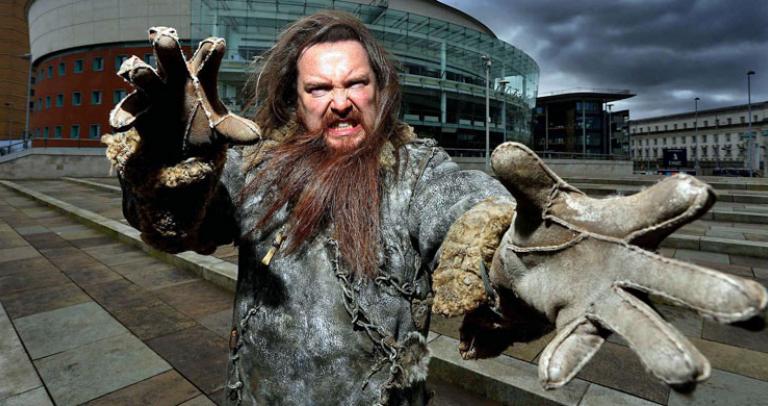 Game of Thrones is one of the most popular and successful fantasy TV series ever made. Filming of seasons 1-4 took place in the Titanic Studios in Belfast and across various locations throughout Northern Ireland including the Cushendun Caves, Murlough Bay, Ballintoy Harbour, Larrybane, Antrim plateau, Castle Ward, Inch Abbey and Downhill Strand. Get the full experience and tour the Game of Thrones Northern Ireland filming locations while you are here. Our rugged coast lines, historic castles and breathtaking scenery is the perfect setting for the epic story.
Step into Winterfell at Castle Ward and have a go at archery in the very place where young Bran was taught by Jon Snow – in the courtyard aka ‘Winterfell’. Stand in a recreated Game of Thrones archery film set tipi, dress in a Game Of Thrones like costume to look the part and get ready to take aim.
More information 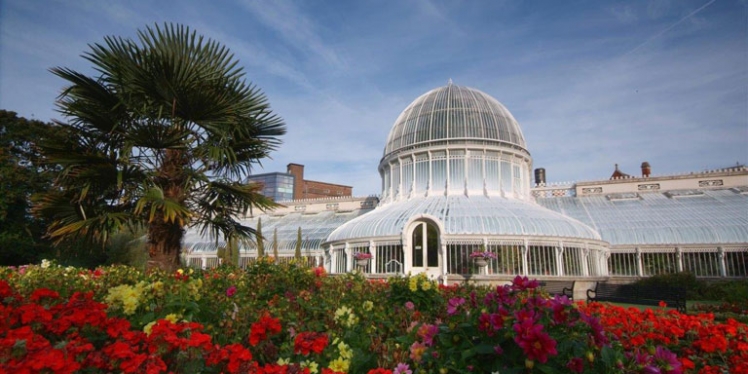 Located beside Queen’s University the Botanic Gardens was established in 1828. The site contained exotic tree species and impressive plant collections from the southern hemisphere, many of which can still be seen in the park. It’s home to the Palm House and the Tropical Ravine. The building was designed by Sir Charles Lanyon, who also helped design parts of nearby Queen’s University. The Tropical Ravine contains some of the oldest seed plants around today, as well as banana, cinnamon, bromeliad and orchid plants.  Like the Palm House, it shows how technology allowed gardeners to cultivate unusual species in a greenhouse environment. Features of interest include a plant-filled sunken glen, flowering vines, tree ferns and leaf silhouettes.
More information 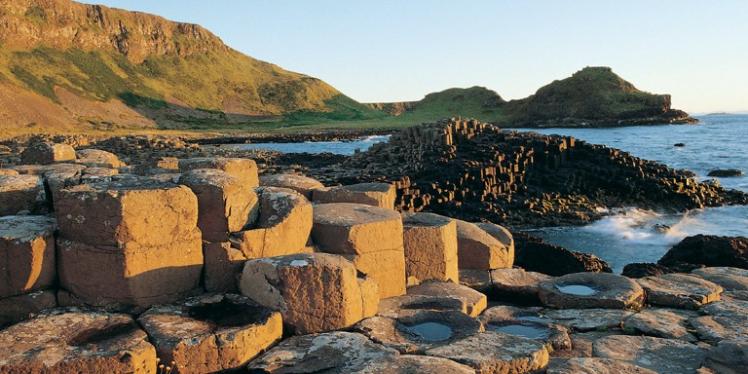 The Giant’s Causeway is a magnificent, mysterious geological formation on the North East coast of Co Antrim steeped in myth and legend. The setting is a spectacular dynamic coastal landscape of Atlantic waves, rugged cliffs, fascinating geographical antiquity, secluded bays and magnificent views. The Causeway forms a jagged headland of neatly packed columns which point towards Scotland. Visitors can walk along the basalt columns which are at the edge of the sea, just over 1km from the entrance to the site.
More information 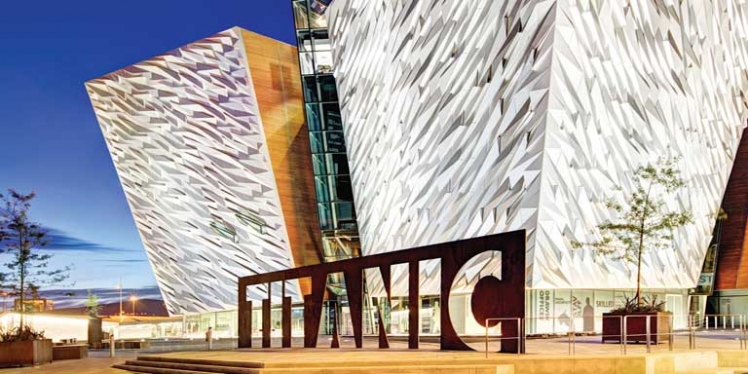 Titanic Belfast is the world’s largest Titanic visitor experience and a “must see” visit in any tour of Belfast and Northern Ireland. It is located in Titanic Quarter, right beside the historic site of this world famous ship’s construction. Housed in an iconic 6-floor building, this state-of-the-art visitor experience tells the story of the Titanic, from her conception in Belfast in the early 1900s, through her construction and launch, to her famous maiden voyage and tragic end. A tour of the exhibition is included in the social event.
More information 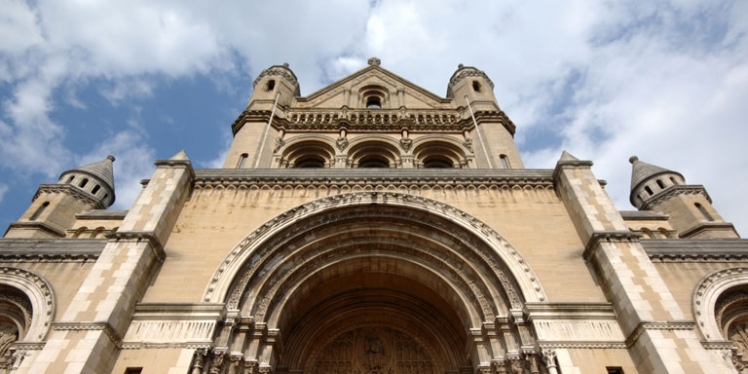 Belfast Cathedral is the church of St. Anne. The Cathedral seeks to maintain an Anglican and Irish ethos and identity in its daily worship, whilst providing a hospitable space for civic, community and inter-church services. A living partnership is maintained with St Peter’s Roman Catholic Cathedral in the city. The building itself is Romanesque, giving it a lofty grandeur associated with that style: semi-circular arches and massive pillars, vast and high single windows, and the whole possessing an uncluttered spaciousness. The Cathedral contains mosaics designed by Sir Charles Nicholson, as well as sculptures by Rosamund Praegar and Maurice Harding. The 40 metre stainless steel Spire of Hope was added in 2007 and is illuminated at night.
More information 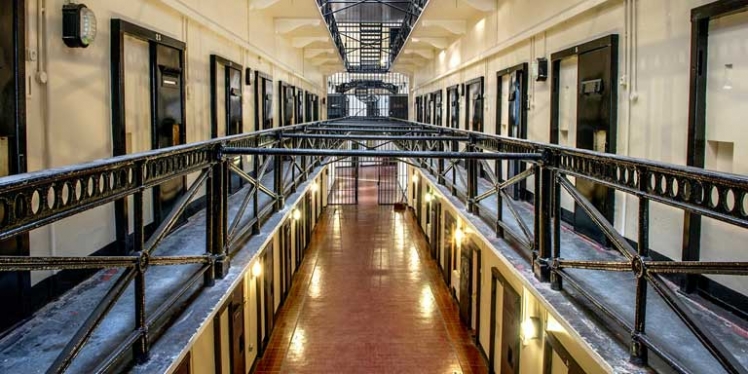 Crumlin Road Gaol first opened its gates to prisoners in 1846 and for 150 years was a fully operational prison. On March 31, 1996, the Governor of Belfast’s Crumlin Road Gaol walked out of the fortified prison and the heavy air-lock gates slammed shut for the final time.
During those 150 years the Gaol has housed murderers, suffragettes and loyalist and republican prisoners. It has witnessed births, deaths and marriages and has been the home to executions, escapes, hunger-strikes and riots. On a 70min (approx.) guided tour you will be taken through the years and experience what life was like for those imprisoned in ‘The Crum’.
More information 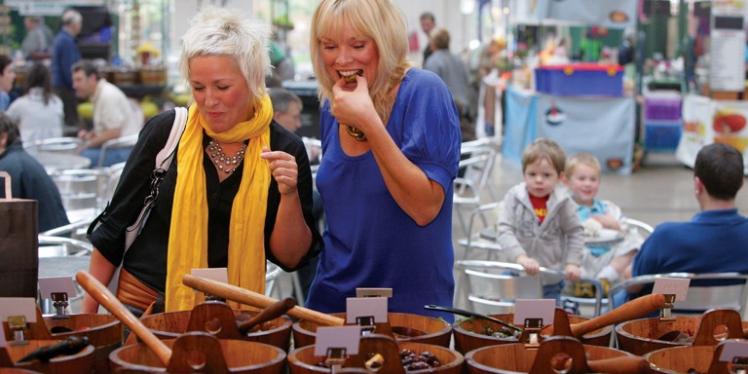 Sample local produce at the lively St George’s Market Open Friday, Saturday and Sunday, you can sample the local specialist food and products or  simply relax with a coffee and newspaper against a backdrop of live jazz or flamenco music. The Friday Variety Market is open 6am to 2pm. The Saturday City Food and Craft Market is open 9am to 3pm. The Sunday Market is open 10am – 4pm and is a mixture of the traditional Friday Variety Market and Saturday’s award-winning City Food and Craft Market.
More information 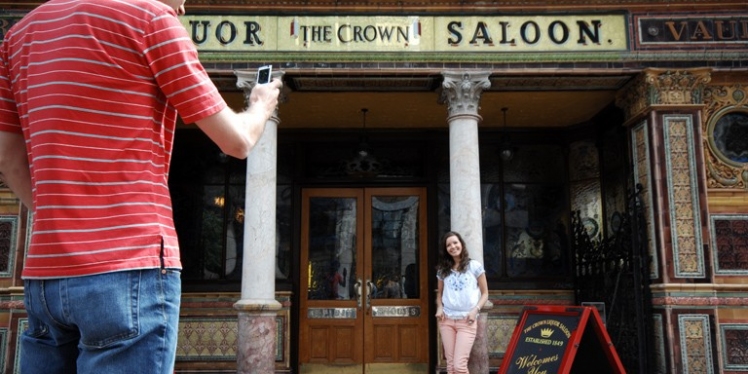 Sample a local brew in one of Belfast’s historic hostelries. Step in to discover a traditional pub of unique character, revered for its eclectic range of real ales and its heartily classic pub food, which are served, as they should be, with a generous measure of famous Irish hospitality.
The Crown is both ageless and priceless, a gem of Victoriana and one of the great bars of the world. Formerly known as The Liquor Saloon in Great Victoria Street, it was one of the mightiest Victorian gin palaces which once flourished in the industrial cities of the British Isles. Dating back to 1826, it is now owned by the National Trust and has been sympathetically restored over the years.
More information 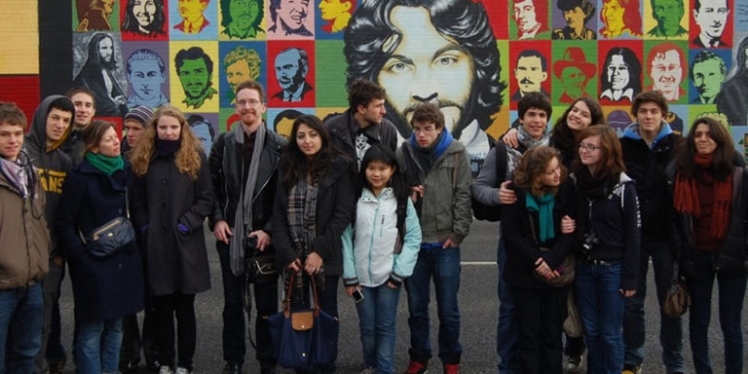 Travel with us into the most recent conflict in Irish history. Journey through the narrow streets of Belfast where battles raged,  communities were divided and heroes were born. See the battle scarred streets, stand in the shadow of the largest peace wall in Belfast and write your own message of peace upon it. We make our way through the famous Falls Road area, were bullet holes can still be seen adorning the many buildings on the route, with a vast array of murals and stories to be told, this will set the scene for the rest of your tour.
The middle ground will take us to the peace wall, a half mile structure that stands guard over both communities. Tens of thousands of visitors have signed their names upon it, Bill Clinton and the Dalai Lama included.
Moving onwards into the Shankill neighbourhood to hear the narrative of this proud community. All the while we will stop off and take photographs of the most famous murals in the world.
More information