In one sense, of course, it has nothing to do with education – certainly not with schools. The EU referendum may be more important than a General Election but education policy is not a competence of the European Union. That means that education is barely registering as an issue in the debate – unlike the practice in General Elections. Indeed, as the Schools Week editor Laura McInerney pointed out, one apparent advantage of ‘Brexit’ for Citizenship teachers is that it would remove their obligation to teach some of most complex and intractable of topics. But in other senses, the debate is powerfully about education

It’s about public education; its about how ideas are debated in public, how information in circulated and absorbed and about how decisions get made. As I write this, the referendum outcome looks to be in the balance – with some evidence from oh-so-reliable opinion polls that support for ‘Brexit’ has strengthened over the campaign. The debate divides conventional political allegiances: we’ve seen a Cabinet deeply riven as ministers not only campaign on opposite sides but attribute the basest motives to each other. The opposition party, nominally in favour of the EU, has advocates for leaving such as Gisela Stuart and Kate Hoey and lukewarm support from the Labour leader. I invariably try to retain political neutrality in what I write: I agree with the Guardian’s conservative-leaning columnist Matthew d’Ancona that the country may be “days away from making a terrible mistake for deplorably stupid reasons”.

Everyone I’ve spoken to about the referendum – those passionately in favour of leaving, those equally passionate about staying and those still to decide – is in agreement about one thing: the calibre of debate is appallingly low.   If this is how a mature democracy debates, then there is work to be done. The campaign has been dire: “depressing, divisive and duplicitous” as the author Robert Harris put it in a tweet. Extravagant claims have been made on both sides, each trading in fear and mendacity. The Prime Minister, after months of careful negotiations about ‘revised membership terms’, has now argued that withdrawal will have devastating economic, social and geo-political consequences, begging the question of why he was prepared to risk an uncertain referendum. His opponents, led by Boris Johnson and Michael Gove, have equally implausibly argued that ‘if only’ we leave the European Union then all – absolutely all, it seems – of our difficulties will evaporate. Such claims insult voters. The debate has become focused on threats and fears, from the impact on the pound, to the impact of migration, to the housing market, in each case playing to the electorate’s worst instincts. The murder of the Batley and Spen MP, Jo Cox, against the background of this tense and unpleasant argument was truly shocking.

In another sense, the referendum is about education, if education is a conversation between the generations. Here too, we have been let down. Too little has been made of the common European inheritance for our children. We live in an interdependent world where the greatest threats – climate change, cyber security, terrorism, food security, population health – and the great opportunities – knowledge mobilisation, cultural exchange – do not respect borders. It’s a world in which movement of people is something we all take for granted, in which ideas move around the world at phenomenal speed. It’s partly for this reason that I have been clear, in blog posts and in the Vice-Chancellors’ letter to the Independent, published on June 21, that we should remain in the EU.

Education, and, especially, universities increasingly drive our world: the rhetoric of the knowledge-based economy involves some important assumptions about knowledge creation and exchange.   Increasingly, universities, and schools think about worldwide partnerships, they engage and attract students globally, and they connect students and staff in international exchanges. The number of students studying outside their country of residence has more than doubled to 4 million in thirty years. It’s no wonder that the UK’s university leaders – normally a fractious bunch – are united in support for remaining in the EU. Anne Glover, the former chief scientific adviser to the EU is clear: science, knowledge creation and universities benefit hugely from membership.

Of course, it looks different from some parts of the country. In large tracts of the UK the very things driving excitement in universities – the free flow of people, challenging ideas, questioning received wisdom – look less attractive. The extraordinary changes of the last generation have been profoundly destabilising for many. The transformation of the workplace by technologies and new patterns of working, shifting assumptions about gender roles, the changing cultural complexion of communities – all these are seen by some as threatening rather than stimulating. For those, the ‘Brexit’ slogan ‘take back control’ has superficial attractiveness. Educators’ enthusiasm for the EU, seen through those lenses, is mere self-interest.

Citizenship can be exclusive, but it can also be inclusive

And this too is powerfully about education, about how we learn to be part of society, about how young – and older – people are formed as citizens and how they see their citizenship.   Citizenship can be exclusive, but it can also be inclusive. As Simon Schama puts it in his Financial Times article:  “[to be] British [is] also to be a citizen of the wider world including Europe“. Those supporting ‘Brexit’ have made a great deal of our history as a proud nation state. But Britain has also been an outward looking nation: a trading nation, an exploring nation, an inquisitive nation. It has been open to and engaged with the world; above all, it is a nation of migrants, through waves of arrivals including seventeenth century Huguenots, nineteenth century Jews and twentieth century Caribbeans and South Asians.

Times of change produce uncertainty, and often a desire to retreat to the apparently familiar. The referendum debate has revealed ugly divisions in our society. Whatever the outcome, healing those will demand imagination, empathy, and the sort of leadership which has been absent during the campaign – whatever the result, the referendum has revealed deep wounds in the body politic, and healing them, in schools, in universities and in society will not be easy.

My view is that the case for membership of the European Union is strong and positive. In the great sweep of history, Britain has always been a European nation, intimately engaged with the politics, cultures and economy of Europe; this too is about education: it is about the way societies learn from and choose to leave behind their past. Alongside the angry, intemperate debates I have been reading David Rieff’s superb new book In Praise of Forgetting, charting the ways in which societies put their pasts behind them and shape them anew. The EU has been one of the major institutions which have brought prosperity and peace to a continent riven by centuries of conflict and destruction. In the depths of a shattered Europe in the 1950s, establishing it was an act of visionary imagination. It has shown itself capable of dealing with those questions – from pollution to international crime to trading standards – which are too big for nation states. Its regional programmes have directed investment to areas in desperate need of sustained support. It has brokered co-operation which would once have been impossible. These are huge achievements: perhaps too large for us to quite hold in our minds in thinking about the day-to-day.

But it can be simply put. We vote in this referendum precisely one hundred years after many of our grandfathers were preparing for the Battle of the Somme, fighting on battlefields in Europe which had seen bloodshed for centuries. We now take European peace for granted. A glance at our past tells us that peace is precious and precarious. Beyond the arguments about the economy, taxation, getting and spending, that is what matters – it’s about the world being created for the next generation. For our grandchildren as yet unborn, the vote has to be to Remain. 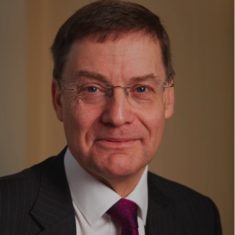 Professor Chris Husbands is a university leader, academic, educationist and public servant. He has served as Vice-Chancellor of Sheffield Hallam University since January 2016.

As Director of the Institute of Education, he led the organisation to top position in the QS world rankings in two successive years, to the Queen’s Award for Higher Education and a dominant position in UK education research.

His academic expertise lies in education policy and practice; his work has been developed in fifteen books and over four hundred papers and presentations. He has advised local and national governments in the UK and internationally, across four continents.

Professor Husbands graduated with a double starred First in History from the University of Cambridge, where he went on to complete a doctorate in Geography. He was a teacher and senior manager in urban secondary comprehensive schools before becoming a university lecturer.

Professor Husbands’ publications include work on education policy, teaching, teacher quality and history education and have been translated into Chinese, Spanish and Greek.

He has co-authored Policy Learning and Educational Change, which will be published later in 2016 by Sage.

What’s in a name? The rise of the practitioner academic and time to reconsider standardised induction support