When I told teaching colleagues I was thinking about ‘manipulatives’, there was a sense we all knew what this meant: the resources in our maths cupboard. This seems at odds with what has been written about manipulatives; much of the equipment is not mentioned and that which is discussed is by no means consistently referenced. Few authors explicitly define the term; again, a ‘taken-as-read’ approach is used. For the term to be used so generically suggests no real differences between resources. I disagree and propose terminology, rooted in function, to distinguish between them. Here, my focus is on ‘concrete’ (i.e., tangible) manipulatives. Consequently, I have excluded ‘virtual manipulatives’ though I do not deny their importance to learners.

Lakoff and Nunez (2000:39-52) use the term conceptual metaphor to discuss how abstract maths is humanly manipulated to make sense via concrete concepts which are then metaphorically applied to explain abstract concepts. Within this, they define two types that move humans on from innate mathematical understanding (our ability to subitise): grounding metaphors help us to progress from the everyday (putting things into piles) to the abstract (addition); linking metaphors link different branches of maths (the number line links geometry and arithmetic).

Building on these ideas, I propose grounding manipulative be used to indicate those resources which give learners physical experiences of the core ideas underpinning abstract mathematical concepts: collections of identical objects (number); objects of different lengths, weights, and volumes (measures); sorting circles (categorisation); a range of 2D shapes (shape).

Concept manipulative could be used to indicate a humanly created resource providing a physical representation of an abstract concept. Within this, I propose two further subdivisions: visual and abstract.

Visual concept manipulatives have visual imagery enabling their handler to make inferences about fundamental concepts of our number system independently: the existence of two different categories of quantity (odd and even) is implicit in Numicon; Dienes apparatus highlights quantitative and cumulative links between base 10 numbers; Cuisenaire rods demonstrate fractions of a whole and relational fractions. Such manipulatives possess enough of what Pea (1993) referred to as inherent ‘intelligence’ to be used as Vygotsky’s supporting able other (Vygotsky, 1978:84).

These are distinct from abstract concept manipulatives. To use these meaningfully, a learner needs some prior knowledge: how numbers are written (number fans); the relevance of numbers’ relational positioning (place value cards); an understanding of the concept being represented (coinage). Without such knowledge, it is not possible to use these resources independently to develop understanding of the number system. Such manipulatives are still concept manipulatives because they are used to model abstract concepts in our number system.

Finally, consider a 100-square and a multiplication grid. If we chop them up and ask learners to put them back together, the multiplication grid would doubtless be returned to its initial state. However, some may rearrange the tens of the 100-square into a linear representation of a number line. This act of altering something meaningfully to create something new is distinct from merely handling it and gives the 100 square manipulative potential: it can be altered to reflect alternative meaning through manipulation thereby enabling exploration of concepts. The multiplication grid has no manipulative potential. Nor do calculators, dice and measuring equipment. These are therefore functional resources and not manipulatives.

Multilink cubes have huge manipulative potential because they can be used as grounding manipulatives (representing quantity, 3D shape, different lengths and weights); as visual concept manipulatives (fractions and ratios); and as abstract concept manipulatives (in place value positions). They can be easily changed by learners to represent different concepts and mathematical ideas, thereby showing the connection between these. This makes them a particularly useful manipulative to have. With a nod to Lakoff and Nunez’s linking metaphors, but viewing the connections less as links (implying a relationship between two things) and more as a bridge (facilitating the transfer of something; in this case, knowledge), I suggest multilink is a ‘bridging manipulative’, perhaps the most powerful type of manipulative.

So, why may a discussion about the language of manipulatives matter? The practical resources available to learners fulfill different purposes. Better terminology, rooted in function, needs to be established so comparable research can be recognised. This could lead to a more effective understanding of the equipment in the maths cupboard and, ultimately, its impact on learners.

Lakoff, G., and Nunez, R. E. (2000) Where Mathematics Comes From: How The Embodied Mind Brings Mathematics Into Being, New York: Basic Books. 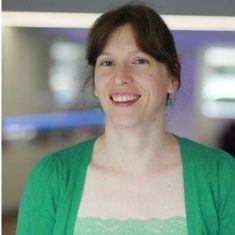 Alexandra Skevington is a primary school teacher in North London who recently completed an MA in Maths Education at the Institute of Education, University of London.

Prior to teaching she had a background in market research working as a Senior Research Executive for Taylor Nelson Sofres (TNS). Alexandra studied music history at Oxford and held a postgraduate performance scholarship at the Royal College of Music. These experiences helped her to develop core skills in research and performance which she still makes use of today.

Alongside her teaching work, Alexandra is beginning to develop a career as a researcher and education commentator. She occasionally attends the IOE Mathematics Education Special Interest Group and is a member of the BSRLM. Alexandra hopes to enrol on an EdD course in 2017.