The integration of technology in the early years of education has followed a rocky path, with many obstacles to overcome. Together with research around the use of new technologies by young children, significant attempts have also been made to assist early childhood educators to understand the pedagogical value of the use of technology as a new type of play. One such attempt was the innovative development of a ‘digital play framework’ (DPF) by Bird and Edwards in 2015. The DPF was designed and implemented in Australia, and its primary aim was to enhance educators’ understanding of how children learn to use technology through play (Bird and Edwards 2015).

‘The primary aim of the “digital play framework” is to enhance educators’ understanding of how children learn to use technology through play.’

According to the framework, children first explore the tool (‘the novel object’), and this is the ‘epistemic’ (from the Greek verb ‘epistamai’, meaning ‘to understand’ or ‘to know’) behaviour, trying to understand technical and functional operations: ‘What does this object do?’. Children then may progress to the more advanced form of exploration, the ludic stage of behaviour (from the Latin word ‘ludus’ – ‘play’, ‘games’), the emphasis now is on, ‘What I can do with this object’. During ludic play children repeat what they already know; they are more relaxed and more emotionally involved. Ludic play in the DPF encompasses symbolic play – for example, children use a tablet to record their puppet show, which was created before the use of the device. Additionally, the element of innovation has been added in the DPF to signal the creation of pretend play deliberately for use of the device – for example, when children create a new puppet show in order to be recorded by the device. 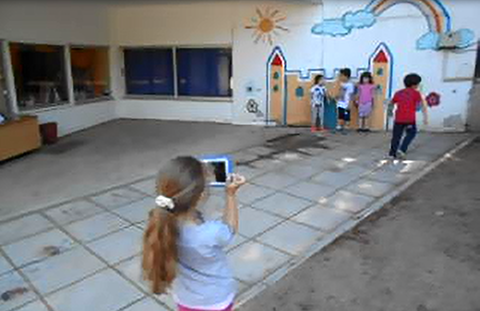 The DPF was adopted and implemented in two kindergartens (for children between four and six years old) in Greece. The aim of the study was to provide a useful assessment tool for teachers to be able to observe and understand how children learn to use a new type of technology through play. Observations and videos of children using the tablets were collected for four months. Findings revealed not only the usefulness of a specific framework, but also the richness of children’s interactions with the tablets – from just learning the functions of the device to problem-solving and entering the ludic stage after only six hours of shared exploration. Children were able to ‘own’ the device and use it for their own purposes. They recorded videos and took photos of their own play as well as their friends’ endeavours. A new technological dimension was added to their play. Technology was immersed in their play, making it more interesting but also more social and co-operative. Significantly, the device was not transformed into something else. That is, it was not changed into an imaginary object as children often do in pretend or symbolic play, but rather was adjusted to the children’s social reality. The device was used as a medium to document important achievements, and became a social and cultural artefact of the room. Children were also able to incorporate the device into their physical play outside (for example, they used the tablet to record a running race and make final judgements on who was the winner). Physical, social, technical and creative skills were all tied together and children’s development was holistic, consistent with how Vygotsky (1978) explained the power of play: ‘play contains… all developmental tendencies’ (74). 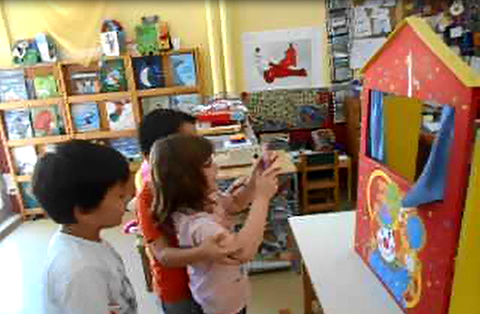 Overall, this study contributes to the field of digital play by providing rich insights on how new devices can be integrated into children’s free play. It also reinforces the evidence that technology is not a threat to play. However, more work is necessary to examine how children can be scaffolded so that they can use technology in creative, innovative and reflective ways in their play. As Montessori noted, play is their work, and our work is to facilitate play and exploration for them in any way possible, providing them with plenty of time to experiment, collaborating with parents, being critical but open-minded and not resistant to change. Technology will continue to evolve and the types and nature of children’s play will also keep on changing, but children will continue to love playing, to learn and grow from play, and this is their undeniable right.

Maria Hatzigianni is a lecturer in digital technologies and in history and philosophy of early childhood education at Macquarie University, Sydney, Australia. Maria was an early childhood teacher in Greece and in Australia for more than 12 years. Her PhD thesis examined the association of computer use with young children’s computer use (University of Melbourne). Maria’s primary area of research examines the use of technology by young children. She is especially interested in the associations between the use of digital technologies and young children’s social-emotional development, play and creativity. She is also interested in the philosophy of technology, critical and postmodern theories. Maria currently is leading a funded research project on what early childhood educators believe around the use of touchscreen technologies by very young children, between birth and the age of three. This project follows up from an international project on parent’s beliefs on the same topic.

To touch or not to touch? Early childhood educators’ beliefs about using touchscreen technologies with our youngest children