In January of this year, the Women and Equalities Select Committee released its report of its inquiry into transgender equality. The inquiry comprised of evidence from transgender community groups, service providers and government ministers. Its scope included a review of existing legislation and public services.

The report addresses the institutional transphobia of the public sector, paying particular attention to the NHS which is failing transgender people due to the attitudes and lack of knowledge of clinicians (House of Commons, 2016). This is not just a moral issue as the report is clear to state that the NHS is failing its legal duty in relation to the Equality Act 2010. This criticism is also levelled at schools which the report states have a responsibility to protect transgender children from harassment under this act and concludes that training on both legislation and gender identity needs to be implemented in these sectors. Improved training for staff was also identified in the prison and probation services and the report stated that the prison service’s revised guidelines on care of transgender prisoners whilst welcome, was overdue.

A key finding, and one generally greeted positively, was the committee’s acknowledgement that the Gender Recognition Act 2004 required updating. The committee acknowledged that the Act’s medicalised approach regarding mental-health diagnosis pathologises transgender identities and called for a model of self-declaration of gender identity to be adopted replacing the onerous, and often humiliating process, of having gender assessed. An aspect of the report that drew almost universal criticism was its recommendation of retaining spousal consent as a requirement to change the status of a marriage if one partner is transitioning their gender. Stonewall (2016) tentatively describe this as a ‘thorny issue’, with transgender groups arguing that it as an unjust system which allows others to have control and power over another’s gender identity (Nonbinary Inclusion Project, 2016).

A long-standing criticism of the Gender Recognition Act is its definition of transgender people as those who have, or are waiting to undergo, gender reassignment surgery, thus reiterating a binary understanding of gender (Stocks, 2015). The report formally recognises non-binary gender and non-gendered identity and posits that those who identify as neither male or female also need to be included in legislation protecting the rights of transgender people. The acknowledgement, if cursory, of non-binary and non-gendered identities does arguably present a significant legalistic and institutional shift in the understanding of gender. This is particularly pertinent when considered through the lens of queer theory which understands gender identity to be naturalised through a historically revisable heteronormative matrix which includes medical and legal discourses (Butler, 1990). It is tempting to think that the inquiry’s findings could instigate such a moment of revision, however, it is important to remember that the report is just that, documented recommendations rather than legal change. Furthermore, it is necessary to heed that the recommendations from the Government Equalities Office 2011 report, Advancing transgender equality: a plan for action, remain largely unimplemented. The use of the term non-binary in the report presents the puzzle of how legislation can protect the rights of those whose identity critique, and gain agency through opposition to, heteronormative ideology. Arguably, however, the way the report frames such identities represents less a revision of Butler’s heterosexual matrix and more a shoring up of existing heteronormative boundaries.  In examining how gender identity is represented in human rights discourse, Waites (2009) argues that the inclusion of non-normative identities in legislation, rather than contesting a heteronormative matrix, further privilege a binary understanding of gender through the assumption of essentialist understandings of heteronormativity. Certainly, rather than questioning the notion of heteronormative gender, the report categorises transgender identity as a deviation from traditional understandings of gender stating that non-normative identity is located ‘outside’ that which is binary. Furthermore, it could be argued that the contentious proposal to retain the spousal veto in relation to the Gender Recognition Act privileges further gender binary, presenting marriage – whether same-sex or heterosexual – not just as a legal contract between two people but as a legalistic fixing of gender within a binary.

The Transgender Equality Inquiry report states that a strategy to tackle the inequality outlined in the report should be done within six months of publication, so in effect, this could be expected imminently. It it only when this is implemented that the impact of this report can fully be measured.

Nonbinary Inclusion Project (2016) Right to Recognition, Leaving Nobody Behind. Available at: https://nonbinaryinclusionproject.files.wordpress.com/2016/01/nbip-statement-on-wec-report.pdf (accessed 16 May 2016).

Stocks, T. (2015) To What Extent Have the Rights of Transgender People Been Underrealized in Comparison to the Rights of Lesbian, Gay, Bisexual, and Queer/ Questioning People in the United Kingdom? International Journal of Transgenderism 16(1); 1–35.

Stonewall (2016) Trans Inquiry – the report. Available at: http://www.stonewall.org.uk/our-work/blog/trans-inquiry-report (accessed 18 May 2016). 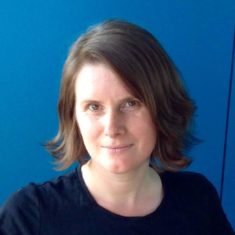 Rebecca Swenson has over 20 years’ experience working in a variety of roles, and more recently undertaking research, in fields related to gender and sexuality. In 2012, Rebecca was awarded The British Psychological Society Women’s Section postgraduate prize for her research into gay women’s identity and media representation. Rebecca’s PhD, which is being undertaken at Brunel University London, will explore the relationship between transgender identity and engagement with objects, space and embodied knowledge.