Is it possible to think about education as adventure? This is a question I raised in a recent article I wrote for the Journal of Education Administration and History (Tamboukou 2016). The idea emerged in the first place when Stephen Ball asked me to suggest a concept for my contribution to a British Academy seminar celebrating his career as the Karl Mannheim Professor at the UCL, Institute of Education in June 2015. It was not difficult to come up with this concept, immersed as I have been in Whitehead’s process philosophy for the last three years. Whitehead was a mathematician and a philosopher, but he was also a teacher and has written about education and its aims, the functions of the universities, the way schools and disciplines work (see Whitehead 1929).

As an adventure in the world of ideas, education for Whitehead should enable students to understand life in all its manifestations. Universities in his view were crucial in creating conditions of possibility for imaginative learning- a place for the adventure of ideas to begin. This is because the history of ideas is actually the history of its countless experiments, failures and adventures. The role of education is to acknowledge such limitations and still support the adventure of ideas. In recognizing the transformative role of an imaginative educational praxis, Whitehead has also highlighted the role of experience in consolidating cognitive transpositions and processes. The task of a university is to weld together imagination and experience he wrote (1929, 98). The importance of sharing and communication in the educational praxis was thus crucial for Whitehead: ‘Imagination is a contagious disease. It cannot be measured by the yard or weighed by the pound […] It can only be communicated by a faculty, whose members themselves wear the learning with imagination’ (1929, 97). Moreover imagination is in itself a process, it can never be crystallised, condensed or conserved, let alone commodified in any sort of knowledge exchange economy or market, notions and structures that we simply take for granted in contemporary educational discourses and policies.

Interestingly enough, Whitehead has also pointed to the fact that as a result of the scholastic education that was prominent in the 16th and 17th centuries, the great thinkers of this period, including Spinoza, Leibniz, Bacon and Erasmus amongst others, were not members of university faculties. The imaginative and creative force of their thought could not develop within the restraints and limitations of the academic milieus of their era. Reflecting on the situation of academic life, as well as the function of the university in the first half of the twentieth century Whitehead could not have possibly foreseen what was to happen at the turn of the second millennium. What he suggested was that usefulness and imagination are not incompatible, but rather interwoven notions of the educational praxis in general and of the expansion of university schools and faculties in particular. How far away have we come from such ideas about what education in general, as well as the role of the universities should be about and what can be done about it?

I have written elsewhere about the Foucauldian notion of parrhesia—the courage to tell the truth within risky situations and its importance for ‘academics in dark times’. (Tamboukou 2012) What I have highlighted in my argument is the force of Bartleby’s negative affirmation: ‘I would prefer not.’ Drawing on Whitehead’s configuration of education as imagination and adventure, I want to move beyond the realm of negative affirmation to a joyful political move: the project of charting lines of flight from striated educational spaces today. If the history of ideas is the history of its countless mistakes and failures, the same applies for imaginative political action in education and beyond: when it fails, it leaves traces of revolutionary events whose aura and memory will continue to inspire and motivate new adventures. Like education, political actions is an open process we are already, always immersed in.

Whitehead, Alfred North. 1929. ‘Universities and their Function’, in The Aims of Education and other essays, 91-101. New York: The Free Press. 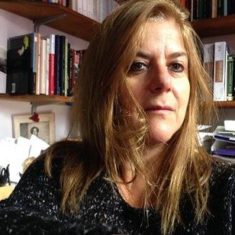 Professor of Feminist Studies at University of East London

Maria Tamboukou (BA, MA, PhD) is Professor of Feminist Studies at the University of East London, UK.  She has held visiting research positions in a number of institutions and is currently Affiliated Professor in Gender Studies at Linnaeus University Sweden and Adjunct Professor at the Institute for Educational Research at Griffith University, Australia. Her research activity develops in the areas of philosophies and epistemologies in the social sciences, feminist theories, auto/biographical narratives and archival research methods. She is the author of 5 monographs, 2 co-authored books, 3 co-edited volumes on research methods and more than 60 articles and book chapters. Recent publications include the books, Sewing, Fighting and Writing: Radical Practices in Work, Politics and Culture and Discourse and Narrative Methods.