The civil war in Syria caused the largest migration of Syrian citizens in the 21st century (Gencer, 2017) and Syrian people have been migrating to Turkey since 2012 (Sirin & Aber, 2018). Many of the reports about refugees generally concern the numbers of migrants and the problems the arrival of such numbers of refugees create (Gencer, 2017). On the educational side, Turkish teachers and Syrian children are faced with language barriers in their classrooms without any preliminary preparation (see Sarmini et al., 2020), and because of these language barriers, children can find it difficult to be included in classroom activities and to engage with their environment.

In recent research with colleagues exploring the playground perceptions of Syrian refugee children (Mart et al., 2022), we wanted to identify refugee children’s understanding of the playground they experienced. We asked 46 children (aged 4–6 years old) from early years settings in two cities (Konya and Kilis) to draw a playground. We set off with the belief that the children’s drawings of playgrounds would reflect their circumstances; however, the pictures drawn by the children did more than describe what they viewed as playgrounds, and the results provided a range of different depictions that can be interpreted in different ways.

‘The pictures drawn by the children did more than describe what they viewed as playgrounds, and the results provided a range of different depictions that can be interpreted in different ways.’

Although I was approaching the research process in an objective researcher position, observing children’s drawings made me think of their conditions. Children reflect their emotions in their playing, drawing and so on (Lustig & Tennakoon, 2008). In their drawings, the children were asked to draw a playground, but they interpreted this as a way of expressing their emotions. Although the focus was playground, children drew trees, the sun, clouds, flowers, human figures, flags, houses, shelters, walls and planes (see Mart et al., 2022).

Various interpretations can be made from the drawings, for instance when the child drew a family figure instead of a playground. As illustrated in the sample drawing in this blog, the 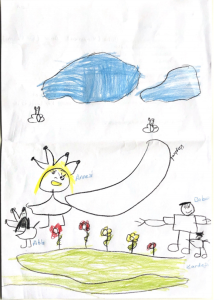 men (dad and brother on the right side) have angry faces and, the women (mum and sister on the right) wear crowns, and the sister has no obvious face. From this drawing, we might think that the child might have a good relationship with her mum, but she might have some issues with her dad and brother. Family drawings can not only exhibit what children feel, but also the children’s perception of the family hierarchy and the relationships among the family (Metin Aslan & Üstün, 2013). This picture can also lead us to thinking about the children’s conditions, because the drawings are the reflection of the social issues that they, or people close to them, have experienced (Steyn & Moen, 2019) – examples include drawing people hiding inside boats, or car accidents. All children – in this context the refugee children – are observers of the events around themselves (Lustig & Tennakoon, 2008) and reflect such events in their games, stories, drawings, and so forth.

Working with children requires hearing their voices. While talking about refugees and the crisis around the world, the conditions of children and the impact of any movement on children’s development should be considered. My recent research with Syrian refugee children causes me to think about them more and has led me to consider supporting them further; I now believe that it is important to have some intervention projects with refugee children rather than undertaking purely descriptive research.

Gencer, T. E. (2017). An evaluation of the relationship of immigration and education: Education needs of the Syrian refugee children and challenges of exposed delays in Schooling processes. The Journal of International Social Research, 10(54), 838–851. 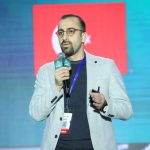 Dr Mehmet Mart is a lecturer at the Preschool Teacher Training Department at Necmettin Erbakan University, Turkey, and is a visiting post-doctoral researcher at the University of Plymouth. His current interests range from outdoor activities to maths in early years and professional development. Within his post-doctoral research, he is conducting research on maths attainment in outdoor activities.