From its origins as the Mechanics’ Institutes in the 1800s, FE has served industry by providing vocational skills to adults to meet the needs of business. However from the beginning it also provided individual personal development and sought to empower students by connecting them with the bigger debates of ethics and values and challenging learners to look beyond their immediate circumstances and to envisage how their worlds could be different. Because FE ‘has its roots in the Adult Education tradition’ (Peart, 2013: 33) it has always tried to value its learners as independent adults and ‘has come to view itself as a different offer’ (ibid). In contemporary times it has also come to be viewed as ‘a second chance for people who have been failed by or who have dropped out of the system’ (Foster, 2005, p5).

From my research with Black male students studying at FE, though many chose college as their preferred route, some attended because they had little choice. All learners in my research expected to successfully complete their college course and to progress either onto another programme at college, into higher education or onto employment.

Here are the stories of two learners, Daniel and John.

Prior to college, Daniel had attended his local secondary school before being permanently excluded and placed on an ‘education otherwise’ programme when he was 14. No other local secondary school was prepared to accept Daniel and he was obliged to attend college. School was an unhappy and difficult experience for Daniel who experienced what he described as ‘a lot of “unfair treatment” ’ (Peart, 2013: 67) including unchallenged ‘racial taunting’ (Ofsted, 1999: 13) from his peers. Daniel very much felt the attitude of school staff and the behaviour of other students had effectively prevented him from positively engaging with education and he had been classified as an ‘aggressive underachiever with [an] attitude problem and limited academic ability’ (Peart, 2013: 17). While in school Daniel had been force-fed an imposed educational diet which he did not believe he had been supported on and did not succeed in.

On transferring to FE, Daniel began a level 1 sports course and worked with tutors to construct a timetable which reflected his skills and interests. For Daniel this was the first time he had been able to have some influence over his learning. Daniel stated he enjoyed being treated like an adult and the ‘more “mature” atmosphere’ (FEU, 1987: 7). He felt FE was ‘a lot different’ (Peart, 2013: 67) from school and liberated from what he perceived as petty rules which reinforced hierarchies, he was able to focus on his study and engage with learning. Daniel successfully completed his course and left college for full-time employment.

John had diagnosed learning difficulties and ongoing mental health concerns. He had previously attended a supported education course     co-ordinated by a day care centre. Although John enjoyed this course, the day centre had not been able to provide him with a progression route. In effect, he had nowhere to go. John transferred to FE to study an individualised learning programme.

Like Daniel, John was able to help co-construct his own learning programme with tutors and to plan the next steps in his learning. John enjoyed the opportunity of working with a broader spectrum of students than he had previously encountered and planning the next stages of his education which included independent living.

It is this sense of control which is so critical for learners in FE. FE values its learners as adults able to make reasonable and informed decisions. It trusts them and provides a bridge to take them onto their chosen next phase, based on their social and academic needs. For some, like Daniel, employment is the most appropriate route; for others, like John, it is better to remain in education, but in the end it is their choice. Daniel and John’s stories demonstrate how FE gives learners back hope and the chance to make choices about their futures.

Foster, A. (2005) Realising the Potential: A Review of the Future Role of FE Colleges, Nottingham: DfES. 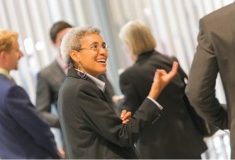 Sheine Peart began working in education in 1986 and has taught in schools and colleges and was a local authority adviser, responsible for managing a team dedicated to raising the achievement of African and Caribbean pupils.  She has also worked in youth group settings, focussing on supporting young women take charge of their own futures.  While in Further Education she taught on different vocational programmes, and worked with SEND learners and those with challenging behaviour. Sheine has held a number of different management posts in FE including Equalities Manager, Teacher Education Manager and Professional Development Manager.  In her current post at Nottingham Trent University she manages and supervises PhDs in Education, teaches on the Education Masters course and contributes to the pre-service PGCE for FE.  She was founder of ‘Black on Track’ an innovative peer-led student support group for Black male students.

All from this series
Remaking Tertiary Education

“I was born here, so I’m British” – What do fundamental British values mean to teachers of RE and year 11 RE students?