A few years ago, I come across the term ‘dawdling’ in the adventure education context. As a non-native English speaker, I googled the term while listening to a lecture on aesthetic processes by Martin Vollmar (2020). According to the Cambridge Dictionary, dawdling is, ‘to do something or go somewhere very slowly, taking more time than is necessary’. One example of dawdling, however, really puzzled me. ‘Stop dawdling! You’ll be late for school!’ This had a negative meaning as though dawdling was inherently a bad thing to do. This made me question some ideas from the lecture and how I was going to undertake my own dawdling experiences.

It took more than a year before the seed of this idea came to life in my own work. I was working with a single mother with a four-year-old son. He was soon to be five, meaning his attention deficit hyperactivity disorder (ADHD) diagnosis would be finalised – the age for diagnosis in Finland. We started our journey from my centre on a nice sunny and snowy winter’s day. At the destination, a wood fire was waiting for us, offering the possibility to warm up, cook sausages and make a warm drink. The path was clear and straight. As we reached the start of the path, the boy started his own journey. If I could have attached a GPS tracker to him, his trail would have been full of loops, curves and snowy forest detours. Whenever the boy took a step out from the path, the mother said ‘no, no, come back’, ‘you will get wet’, ‘don’t embarrass me’, ‘hurry up, we will be late’. The boy continued his own journey and also looked back at his mother every now and then, asking with his eyes for permission to continue his own adventure. He continued finding his own path even without his mother’s permission. He had changed his journey, after every look back at his mother.

I was fascinated with the boy’s dawdling journey and did my best not to undermine his mother’s authority. I gently encouraged her to see the wonderful imagination, purity of movement and happy expressions of her son. During the 700-metre walk, it was possible to observe the boy as a knight fighting with a sword made from a stick, a rabbit jumping next to a fallen tree, an adventurer rolling on a snowy bank downhill, and a mountain climber reaching the small snowy summits. At our destination, his mother was ‘with me’ to see her son acting with superhero behaviour using the place, time and opportunity not only to move to the destination but to open his body and mind for discovery.

‘By slowing down … people become more self-aware – of their emotions, nature, and the places where they dawdle. By consciously “dawdling” we can perhaps more purposively attend to our wellbeing.’

Since then, I have tried my best to open possibilities and opportunities for dawdling to the groups I work with outdoors. The results are remarkable! In a recent example, adult nature-guide students used their sliding snowshoe trip to the forest, dawdling their way, even though in the beginning some of them were asking the length, duration and destination of our journey. We ended up being ‘late’ for lunch by half an hour, but it meant they all had the feeling of a timeless moment.

These moments of personal discovery while dawdling brought to my mind the question: should this be for all of us? Should doctors start to write dawdling prescriptions to give us permission to take time to go from A to B seeing all the possibilities around us without the pressure of time? Can we do it without permission from any authority but ourselves? Dawdling, and slowing down, have been described as adopting a ‘slow pedagogy’ (Payne & Wattchow, 2008) as a post-traditional approach to outdoor education. This is adapted by Leather and Thorsteinsson (in press) in developing their ‘sense of place’, and who also use Frédéric Gros’s Philosophy of Walking (2014) and his concept of ‘slowness’. Slowness is not the opposite of speed, but of ‘haste’. By slowing down, Gros argues, people become more self-aware – of their emotions, nature, and the places where they dawdle. By consciously ‘dawdling’ we can perhaps more purposively attend to our wellbeing. 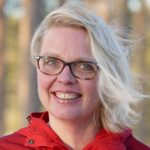 Tanja Liimatainen works as the programme manager for the youth team at Metsäkartano, Kuopio, Finland. Metsäkartano creates opportunities for people to develop a stronger connection with themselves and Finnish nature. The basis of her work is environmental education and experiential learning through exploring the great outdoors. The Youth Center Metsäkartano is a social enterprise and targets its profits at promoting youth work. They were awarded the Green Key standard for environmental responsibility and sustainability.

Wellbeing and being outdoors series

All from this series
Ageing in nature: Outdoor learning as lifelong learning

Giving back to nature