As the leading cause of death in England and Wales (ONS 2017), dementia touches many families and, even if they don’t have a relative with the condition, most people at least know of someone who does have it. Within the media and in public perception there’s a tendency to equate dementia with Alzheimer’s disease characterised by memory loss and confusion and affecting older people. However, there are many types of dementia, including young-onset variants with a range of symptoms that generally manifest when people are in their 40s and 50s, and are working and meeting familial, financial and social commitments. Some of these people will have children in school, college or university. When, 15 years ago, my husband began to exhibit behaviours that were eventually diagnosed as related to vascular dementia and posterior cortical atrophy, he was 55, and our children 13 and 15. Observing the impact his illness had on the kids and becoming acutely aware of the lack of support and resources to help them understand and cope with what was happening, I felt compelled to undertake research to see how it was for others, and obtained funding from the Alzheimer’s Society for an investigation that ran from 2014 to 2017 (grant R138585). To date we have published seven papers, including the latest article appearing in the British Educational Research Journal (BERJ) which focusses on the impact of parental dementia on educational careers.

The study, which took a narrative auto/biographical approach, was advertised on a project website, on the Alzheimer’s Society (UK) and Young Dementia UK platforms and on Twitter and Facebook. Twenty-two of the 24 participants found us within hours and days of the adverts going live when they, or their parent, were searching for information about young onset dementia. That this happened is a clear indicator of the lack of information, resources and support available.

Over three years, the participants, aged from six to 31, told their stories to Mel Hall, the project’s research officer. She met with most of them at least twice, giving the study a longitudinal aspect that provided information about how they experienced and dealt with changes in their parent’s condition. All were attending school, college or university when their parent was diagnosed. Two participants were already bereaved when they joined the study, and four parents died during the course of it.

‘There has been very little research into how parental dementia affects young people, but what exists points to significant emotional and mental issues that can have an enduring impact on lives.’

There has been very little research into how parental dementia affects young people, but what exists points to significant emotional and mental issues that can have an enduring impact on lives (see for example Barca et al 2014). Our study was unique in the field in that the young people were simply invited to say how it was for them. This meant that rather than giving specific responses to particular questions, participants talked freely and frankly. Thus the notion of ‘cancer envy’ was voiced by a number of people who were envious of those whose parent had cancer – because there are cures for many cancers and because people with cancer usually continue to be able to communicate, to advise, support with educational decisions and financing, and work to resolve the relationship problems that are not unusual in adolescence. Another consequence of the approach was that participants appeared to feel sufficiently comfortable to express negative thoughts that sometimes ran contrary to socially dominant master-narratives concerning dementia. For instance, they talked about: embarrassment and/or irritation with their parent’s behaviour; of their ongoing sadness and grief as their parent progressively lost functions and abilities; how they didn’t feel that their parent was still the same person they had been before their illness; how neither they nor their parent could really be considered to be living well with dementia; and of wishing their parent was dead rather than alive with end-stage dementia. They described how their educational careers had been affected in various ways, and of how they felt misunderstood by those who assumed that their experience was the same as that of adult-children whose older parent has Alzheimer’s disease. It isn’t.

These youngsters do not constitute a large group – estimates suggest there are around 43,000 people in the UK with young-onset dementias, and there is no data on how many have children under 25. Nonetheless, describing their experiences, as the BERJ article does, is the crucial first step in helping educational institutions begin to understand, and to provide the support that’s clearly needed and which is currently lacking.

Pat Sikes and Melanie Hall’s original article in the British Educational Research Journal (BERJ), ‘The impact of parental young onset dementia on children and young people’s educational careers’, is published on an open-access basis, so can be read freely on Wiley Online.

Barca M, Thorsen K, Engedal K, Haugen P and Johannessen A (2014) ‘Nobody asked me how I felt: Experiences of adult children of persons with young-onset dementia’, International Psychogeriatrics 26(12): 1935–1944 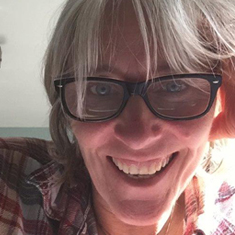 Pat Sikes is professor of qualitative inquiry in the School of Education at the University of Sheffield. Before her recent interest in the impact that parental dementia has on children and young people, the majority of Pat’s work has focussed on various aspects of teachers’ lives and careers, auto/biographical methodologies and methods, and research ethics. Pat was recently involved in editing the 2018 iteration of BERA’s Ethical Guidelines for Educational Research, and is guest editor of the latest edition of the soon-to-be-published issue of Research Intelligence focussing on ethical issues in educational research. Pat was an editor of the British Educational Research Journal between 2003 and 2007, and a member of BERA Council between 2010 and 2013.

Research which chooses you: some thoughts

Has there really been a decline in happiness among young people in the UK?