The London bombings, 10 years ago this year, radically transformed the education policy framing of Muslim communities in Britain. The events signified a radical shift away from the politics of racial inequality/multiculturalism to racialised politics of securitisation. A clear example of how minority communities are racialised and also criminalised can be seen through the politics associated with the Counter-Terrorism and Securities Act 2015 and its impact on education policy.

Section 26 of the Act places statutory duties for schools (including nursery schools) to exercise ‘due regard to the need to prevent people from being drawn into terrorism’. The government’s revised Prevent policy published in 2011, as part of the CONTEST 2 strategy, defines extremism as ‘vocal or active opposition to fundamental British values’, these non-negotiable British values, include ‘democracy, the rule of law, individual liberty and mutual respect and tolerance of different faiths and beliefs’. In fact, the new guidance issued to schools in July urges schools to play an active role in promoting British values through the school curriculum. It also advises school teachers to ‘identify pupils who may be at risk to radicalisation’ and also demands schools to build pupil resilience to radicalisation by promoting ‘fundamental British values’.

In case schools are reluctant to comply with the duty then the Prevent Oversight Board has the ‘power of direction’ through the Secretary of State (see section 30 of the Act) to ensure schools do comply with this section of the legislation. More crucially, Ofsted conscious schools may well draw the conclusion that ‘resistance is futile’ particularly given that promoting fundamental British values and ‘approach to keeping pupils safe from the dangers of radicalisation and extremism’ are key features of the Ofsted inspection criteria (see Ofsted Inspection Handbook). Possible signs of extremism within schools will inevitably fall under the one of the following tropes; this is clear from a close reading of the documentations published in light of the ‘Trojan Horse’ saga and also the subsequent interviews given by leading political actors including David Cameron, Theresa May and more recently the Education Secretary Nicky Morgan:

Racialised sexual politics: A recurring theme within policy discourse revolves around the notion that Muslims are essentially homophobic and sexist. For example, in a recent interview to the BBC’s Today programme Ms Morgan described how intolerance towards homosexuality could be seen as an example of extremism (Ms Morgan, a Christian voted against gay marriage). Moreover, anyone reading The School Report by Stonewall will quickly realise that Muslims do not have sole monopoly over homophobic bullying in schools.

conventional debates around educational underachievement, discourses around racial inequality or anti-Muslim racism are all disregarded for broader security concerns

Self-segregation: Claims of Muslims’ self-segregation can either take the form of spatial or cultural segregation. This is one of the key features arising from the Trojan Horse discourse; Ofsted Inspectors and the investigations into the Trojan Horse letter by Ian Kershaw and Peter Clarke had a tendency to conflate segregation or self-segregation with extremism. Firstly, Muslim pupils are no longer individuals with their own autonomy; they are problems that need addressing. Thus conventional debates around educational underachievement, discourses around racial inequality or anti-Muslim racism are all disregarded for broader security concerns.

In short, the racialised politics of securitisation incorporates the idea of post-race; that is to say that race is no longer the salient excluding marker that it once was and the continuing racial practices of the state which impact upon racial experiences of minority groups. Third, the logic which permeates the current hysteria around Muslims as the existential security threat follows a particular thought pattern, that is, there is a ubiquitous security threat and something exceptional has to be done about this threat. In the spirit of the moral panic, parameters for these debates around security are so narrowly defined to limit any critical discourse – so that criticism of fundamental British values leads to one being defined as an extremist. Second, it is clear that the Muslim problematic embodied by the image of Dangerous Brown Men (see Gargi Bhattacharyya) is constructed within policy discourse.

Thus policy formation is no longer based upon evidence or rational thought but rather as David Gillborn has shown from the following statement by Paul Flynn, member of the Public Administration Select Committee, that ‘much of our policy making is evidence free, prejudice driven and hysteria driven (particularly hysteria generated by the press). A crucial point to note is that ‘extremism’, as defined in the above policy discourses, is often projected onto Muslim bodies and rarely projected from Muslim bodies.

What are the implications for the sociology of schooling for minority groups in general and Muslim communities in particular?

What are the implications for the sociology of schooling for minority groups in general and Muslim communities in particular? What implications will this have on the racialised politics of schools for Muslim pupils? More crucially, does this fundamentally change the nature of schooling to what Michael J. Dumas as described as schooling as ‘spaces of Black suffering’.

Finally, the debates around Prevent in schools ‘marks’ Muslims in class as the racialised ‘other’ a group that is de-humanised and stigmatised; ironically whose de-humanisation and stigmatisation is silenced. 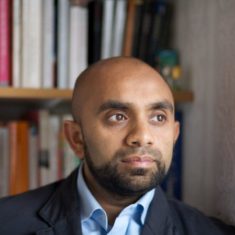 Dr Shamim Miah is a Senior Lecturer at University of Huddersfield. He is the author of Muslims, Schooling and the Question of Self-Segregation (Palgrave)

What has been the impact of recent domestic terrorist attacks on education policy in France?

A four-point plan for improving education against extremism