The study of education consists of a range of traditions with distinct origins, purposes and foci. Judge and colleagues have shown how education developed as a field of study in markedly different ways in different countries (Judge et al, 1994), while Schriewer (2009) has shown how the provenance of the field can have lasting effects on its nature today.

Informed by historical and comparative perspectives, a symposium at BERA Conference 2017 – convened by Geoff Whitty with Gert Biesta as discussant, and involving contributions from John Furlong, Gary McCulloch and Jim Hordern – explored ways of understanding how education has come to be differentially constituted as a field of study. The symposium introduced ideas discussed in greater length in Whitty and Furlong’s edited collection, Knowledge and the study of education: an international exploration (2017), a book that stemmed from the British Academy funded project ‘Educational Studies: the university project in different jurisdictions’ undertaken by Whitty and Furlong. The book includes contributions – from Regis Malet, Jurgen Schriewer, Lynn Paine, Irena Zogla, Wen Wen and Xie Weihe, Susan Groundwater-Smith, and Nicole Mockler – that discuss educational knowledge traditions found in a range of countries (France, Germany, the US, Latvia, China, Austrialia), in addition to contributions that aim to strengthen conceptualisations of the educational knowledge field (from Gary McCulloch, Dina Kuhlee and Chris Winch, Teresa Tatto, and Jim Hordern), and an afterword from David Labaree.

Exploring such issues is vitally important at a time when schools of education are being encouraged to reflect on their mission (Furlong, 2013; Labaree, 2004). In certain countries – notably England but also some other European countries and the US – politicians are increasingly advocating a narrowing of what counts as legitimate in teaching and research in education, arguing that funding should be restricted to utilitarian approaches that contribute directly to improving practice in schools and colleges.

The study of education is made up of a range of different intellectual traditions with distinctive epistemological assumptions and relationships to practice.

The two further papers in the symposium explored means of conceptualising education as a field of study.

Gary McCulloch’s paper identified conceptions of disciplinarity and inter-disciplinarity found within the global literature on the study of education. He proceeded to explain how the dominant definition of education as an applied multi-disciplinary field developed in England, and with what consequences. These ideas are also explored in a recently published book that Gary has co-authored with Steven Cowan (2018), A Social History of Educational Studies and Research.

Jim Hordern’s paper discussed how aspects of Bernstein’s (2000) work may help in the conceptualisation of educational knowledge, examining relations between higher education, professions and practice, and how contributory disciplines articulate within the body of educational knowledge. The papers were followed by comments from Gert Biesta and searching questions from a lively audience.

The symposium aimed to demonstrate the richness and variety of education as a field of study around the world, and to indicate some parameters by which its traditions can be differentiated. We suggest that, by rendering the nature and provenance of different traditions visible, those with a commitment to the study of education will be better able to contribute to ongoing debates about the future of this important, but often misrepresented and misunderstood, field of scholarship. 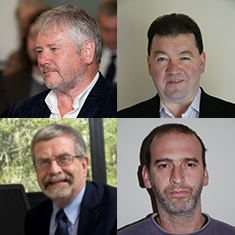 John Furlong is an emeritus professor and former director of the Department of Education at the University of Oxford. He is currently adviser to the Welsh government on initial teacher education, and a former president of BERA. His research interests centre on both teacher education and educational research policy, and the links between them.

Jim Hordern is a senior lecturer at Bath Spa University. His research interests focus on educational knowledge and practice, particularly in higher, professional and vocational education.

Gary McCulloch is Brian Simon Professor of the History of Education at UCL Institute of Education. He is currently president of BERA and editor of the British Journal of Educational Studies. His recent work includes a book, co-written with Steven Cowan (2018), on the social history of educational studies and research.

Geoff Whitty is director emeritus of the UCL Institute of Education in London. He currently holds a research professorship at Bath Spa University UK and a Global Innovation Chair at the University of Newcastle, Australia. He is a former president of the College of Teachers and of BERA. A sociologist of education by training, his current research interests are in education policy, with particular reference to teacher education and widening participation in higher education.

Does bias in secondary school track recommendations change over time?