In the wake of terror attacks in London and Manchester in 2017, concerns have been raised about the extent to which governmental strategies to combat terrorism are successful in preventing extremism. The requirement “not to undermine fundamental British values” (FBV) has become part of the Teachers’ Standards (DfE 2012) slipping silently, seamlessly and seemingly unchallenged from the government’s counter terrorism strategy Prevent (2011).  FBV are denoted as:

Our research arose from a BERA Symposium in October 2012 organised by the BERA Race, Ethnicity and Education Special Interest Group (SIG) and the Religious Education and Moral Education SIG.

Guidance on Spiritual, Moral, Social and Cultural (SMSC) education to “actively promote fundamental British values” (DfE 2014) as well as the need to monitor children and young people at risk of radicalisation, places teachers in a precarious position having to negotiate their role as teacher and agent of surveillance within their classroom.  Thus requiring them to place certain pupils who have been racialized and labelled through media and political discourse as ‘suspect’, namely Muslim children and young people (Lander 2016).

Yet the role of the teacher should allow children and young people in our care the time and space to explore, articulate and share their developing ideas with respect to a range of social, cultural and moral issues (Revell and Elton-Chalcraft 2016).  But the imperative to police any opposition to FBV has ironically served to silence the voices of Muslim children and young people curtailing their right to free speech and thereby infringing their liberty within the now securitised space of the classroom which at one time they may considered safe.

Our research aimed to gather the perspectives of student teachers with respect to the inclusion of the term FBV within the standards (Elton-Chalcraft et al 2017).  The research involved student teachers at four universities located in the North-West and Southern England, the majority were White British and it seemed students from one university who had studied modules on ‘race’, racism and education appeared to be more critical in their responses to the FBV agenda.

The student teachers’ responses to ‘what are fundamental British values?’ fell into three categories:

Some respondents cited the familiar tropes of politeness, queuing, drinking tea, patriotism and monarchy.  We would question  how well they are preparing their students for a society which is distinctly multicultural choosing to maintain a nostalgic notion of Britishness which bears little resemblance today.

Even more worrying were responses which clearly delineated a sense of belonging for some but not others, such as this, “The fact that people who live here should love Britain and promote our key ethics, such as freedom. Any person living in our great country, whatever race or creed, should love the country and live by our laws.”  This response reflected how the respondents viewed those “who were British and those who were not quite British enough” (Smith 2012) thus maintaining an “us and them” binary asserting also the need for “them” to assimilate into British society.  Will these teachers be maintaining this notion of Britishness in their classrooms and placing under surveillance some children who they don’t consider “quite British enough”?

Nevertheless some of our student teachers demonstrated greater levels of criticality:

“Britain is a truly diverse society … we need .. a debate about British values in which everyone is involved so we can decide ourselves rather than being told what they are by the elite and the Church”.

“Honestly I think it’s a horrendous knee jerk reaction to all the propaganda currently surrounding immigration. I think it’s a right-wing government pandering to the people who read ‘The Daily Mail’ or ‘The Sun’ without engaging in an intelligent debate about the reality of immigration. I also think it’s loaded with a veiled racism, suggesting British values are superior”.

As teacher educators we need to provide future teachers with spaces for critical and courageous conversations related to fundamental British values, securitisation, ‘race’, racism and education. 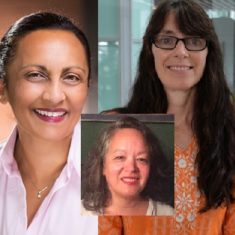 Prof Vini Lander is Professor in Education and Head of Research in the Faculty of Education at Edge Hill University. Her dedication to promoting race equality and her long-held belief that teachers can make a difference underpins her teaching, publications and research.

Dr Sally Elton-Chalcraft is a Reader in Education at the University of Cumbria, publishing and researching in the areas of creative and inclusive education, values underpinning school leadership, and research ethics.

Dr Lynn Revell is a Reader of Religion and Education at Canterbury Christ Church University, publications and research interests include Islam and education, extremism, and teacher professionalism.

Children’s agency: What is it, and what should be done?