Developed countries have plunged into an intelligent era, while Ghana and many sub-Saharan African countries are still taking baby steps towards modernisation. It’s nearly two decades since Ghana announced its goal of using digital technologies to transform itself into an ‘information and technology-driven high-income economy’ (Adarkwah, 2021). The affordability, accessibility and availability of technological devices and resources, which are essential blueprints to achieving this goal, have eluded Ghana. Less developed and emerging economies need an invigoration of current transformations in this intelligent era. A more pragmatic approach is needed towards digital policies.

Digitisation has been a developing phenomenon pre-pandemic. However, the unparalleled new challenges that accompanied the Covid-19 pandemic prompted the Ghanaian government to accelerate its efforts to weave new technologies into the fabric of society. The pandemic crisis stretched the economies of many lower–middle-income countries to the point of collapsing because of the greater reliance on a paper-based system. The operational shutdowns of the business industry, education institutions and many vital sectors of society made people’s lives vulnerable. Hence, the need to implement digitisation policies as a countermeasure against future crises.

‘The pandemic crisis stretched the economies of many lower–middle-income countries to the point of collapsing because of the greater reliance on a paper-based system.’

A digital opportunity for the rest of Africa

Although the e-initiatives of Ghana are yet to gain solid roots, it serves as a model for the rest of the African countries that are yet to embrace such policies. The need to transition from brick-and-mortar outlets or shift commercial activities online cannot be overemphasised in these extraordinary times which demand a swift infusion of technology into society. The whole of Africa needs to transform from an ‘analog world’ to a ‘digital world’.

Digital ethics is fundamental to the implementation of e-initiatives. Because human beings are at the centre of any technological evolution, potential risks associated with e-initiatives need to be eliminated. Issues relating to privacy, data protection, access and inclusivity need to be addressed. Digital policies by governments need to be planned with citizens and pilot-tested before nationwide implementation. In Ghana, because e-initiatives such as the e-levy and biometric SIM registration were rolled out without proper consultation with the public, some citizens are unclear about the goals of the initiatives, while others believe there is a hidden political agenda by the incumbent government (BBC, 2022; Ghanaweb, 2022). Newspaper reports and state media have reported about the long queues with the biometric SIM registration that force citizens to stand in the heat of the sun. Matters such as human health and social welfare are issues of concern.

The e-initiatives and the developed world

In this intelligent era, no country is to be left behind in the provision of digital services. An inclusive approach needs to be adopted in building smart cities and smart economies. It behoves developed countries to aid lower–middle-income economies in revolutionising their traditional mode of operations to adopt modernised systems. The reluctance of advanced countries to contribute to the technological development of emerging economies can suffocate their efforts to leverage digital technologies for their survival in this digital era. Less developed countries can tap into the high-tech resources, knowledge and skills at the disposal of developed countries. Ghana and its peer countries in Africa are burdened by under-investment of infrastructure and high foreign debts, which curtails their efforts to invest rapidly in digitisation initiatives (Khoo, 2020). 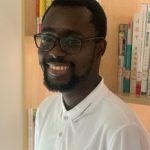 Michael Agyemang Adarkwah is a postdoctoral researcher at the Smart Learning Institute, Beijing Normal University. He obtained his PhD in education leadership and management from Southwest University. He has a Bachelor’s degree in nursing and has worked as a registered nurse in Ghana. His research interests are: teaching and learning, motivation, assessment, digitalisation, computers and education, special education, linguistics, diversity in health care, and nursing practitioners. Michael is an international expert peer reviewer. He is on the editorial board of the Journal of Educational Studies and Multidisciplinary Approaches, the International Journal of Modern Education Studies, and Social Education Research. He is an associate editor for SN Social Sciences and was recently invited to serve as an assistant editor of the Online Learning Journal.

A gap in disability research: ‘Preparedness’ of teachers with disabilities amid Covid-19-inspired online learning

Access to education in a time of pan(dem)ic in Jamaica: Rural and urban primary schools’ experience

Education during a pandemic: Lessons from the United Arab Emirates